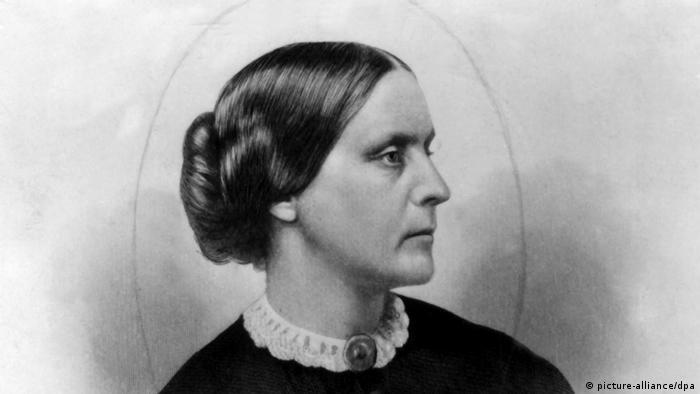 Two hundred years ago, long before the #MeToo movement, on February 15, 1820, a figurehead in the fight for women's rights was born in a small town in Massachusetts. The second oldest of seven children, Susan Brownell Anthony was born into a Quaker family whose were passionate about social reform. Anthony started her career in activism at an early age. At 16, she was already collecting signatures for the anti-slavery movement.

In 1826 her family moved to New York State. They held weekly gatherings for local activists, including well-known African American abolitionist Frederick Douglass. Anthony began to work in education, becoming the headmistress of a school where she became distressed that her salary was significantly lower than that of male colleagues in the same position. Later, she said of herself at the time, "I wasn't ready to vote, I didn't want to vote, but I did want equal pay for equal work."

Read more: How German women obtained the right to vote 100 years ago

In 1848, the first National Convention for Women's Rights in the United States was held in Seneca Falls, New York. What resulted was the Declaration of Sentiments that laid out 18 points related to injustice against women and demanded that women be granted all the rights and privileges that men had — including the right to vote.

One of the initiators of this first convention was Elizabeth Cady Stanton. She and Susan B. Anthony met in 1851 and became close friends and companions in the fight for women's rights.

Anthony had a talent for organizing; Stanton a flair for impressive speeches: "I forged the thunderbolts, she fired them," Stanton later said. Anthony organized several conventions, including the Women's Rights Convention and the Anti-Slavery Convention, which assisted slaves fleeing the South to the North. In 1863, she and Stanton founded a Women's National Loyal league, the first national political women's organization in the United States. The organization did not only fight for full citizenship of women, but also for those who had been enslaved. 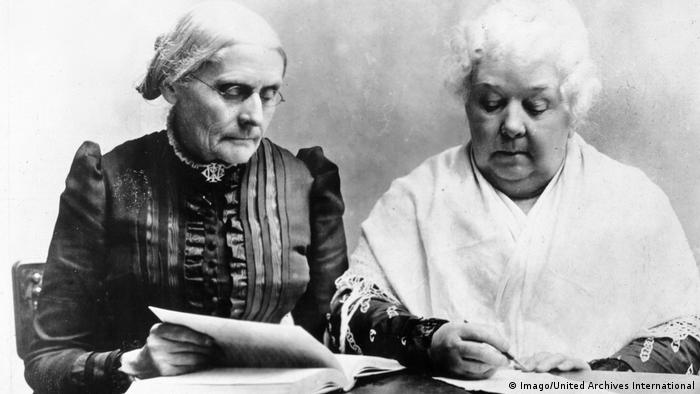 Susan B. Anthony and Elizabeth Cady Stanton were lifelong friends and partners in activism

Temperance as a women's rights issue

Alcohol abuse had become a major problem in cities at the time, and as a result abstaining from alcohol was a major theme in the fight for women's rights. Since laws of the time gave husband's complete control of the family finances, temperance was very much a women's rights issue. Alcoholism threatened to ruin many families not in the least because very few women at the time were allowed to work.

In 1853, when Anthony planned to speak at the state temperance convention against the consumption of alcohol, the group's men banned women from speaking, saying that female delegates were simply there to listen and learn, not to talk. Furious, Anthony and Stanton organized a Women's State Temperance Society. They petitioned for a law restricting the sale of alcohol in the state of New York. However, the relevant body refused to consider the document because most of the 28,000 signatures were from women.

Anthony and Stanton also published a newspaper, The Revolution,which was radical for its time, arguing for an eight-hour work day and equal pay for men and women. She encouraged many women in the publishing industry to form Working Women's Associations, since they were excluded from joining trade unions with men. Anthony herself became the first elected president of the Working Women's central Association, which provided educational opportunities for women in the workplace and even encouraged printing companies to hire women while the industry's men were on strike. 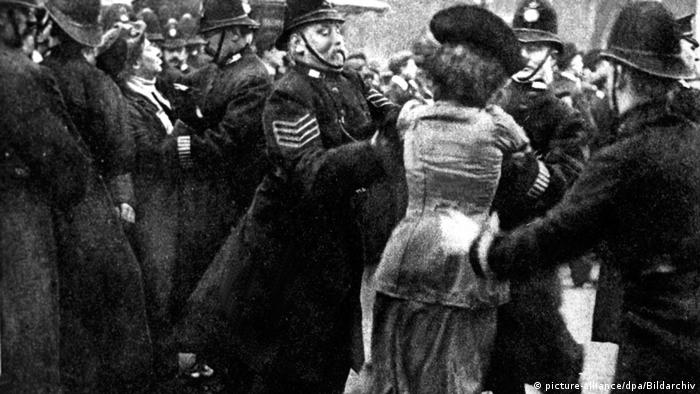 During the presidential election in November 1872, Anthony threw a ballot into the ballot box. She, along with three of her sisters and other women, were arrested and charged for violating a state law and eventually forced to pay a fine, which she never paid.

The trial was widely publicized and gave Anthony the publicity she needed to make the demands of the women's movement heard. In the latter half of her life, Anthony worked on campaigns for a constitutional amendment guaranteeing women the right to vote. She traveled around the country, giving 100 speeches a year. She also went abroad to Berlin in 1904, where she founded the International Suffrage Alliance (IWSA) with women from around the world.

Susan B. Anthony passed away in her home in Rochester, New York on March 13, 1906. Some years later, in 1920, women in the United States were guaranteed the right to vote with the 19th Amendment. In honor of the relentless fighter, it became known as the Susan B. Anthony Amendment.

British cities were awash with green, white and violet, as thousands marched to celebrate 100 years since women first won the right to vote. In London, the crowd marched from Park Lane to parliament. (10.06.2018)

Journalist Shiori Ito has won her rape allegation case against a prominent TV host in Japan. Ito became the face of the #MeToo movement in the conservative country when she spoke out about her experience. (18.12.2019)