A new role for ASEAN in the Thailand-Cambodia border row

Thailand and Cambodia have agreed to allow Indonesia to monitor the ceasefire over the border near the Preah Vihear temple. A step said to be historical for ASEAN, which has been known for its non-interference policy. 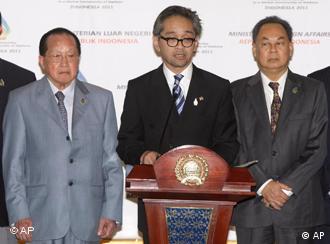 At the end of an informal meeting of foreign ministers from the Association of South East Asian Nations ASEAN in Jakarta, it was announced that Indonesia, as the current chair of ASEAN, is expected shortly to send an observing team to both sides of the Thai-Cambodian border. The unarmed observers consisting of both civilian and military personnel will then report to ASEAN and the UN Security Council. Moreover, Thailand and Cambodia, which have both accused each other of starting the clashes around the Hindu temple of Preah Vihear, will also involve Indonesia in future bilateral talks. Bangkok had previously resisted Cambodian calls for third-party mediation.

ASEAN's Director General, Djauhari Oratmangun, is satisfied with the progress, calling it a historical step that the organization has never been seen before. He said further, "everyone agrees that in order to reach the goal of an ASEAN Community by 2015, ASEAN has to show the international world that if there is a big conflict between two ASEAN countries, then ASEAN can solve the problem. This is amazing."

ASEAN member countries are hoping to build a European Union-like community by 2015. The ASEAN charter, signed in 2008, also gives a greater role to the foreign ministers and obliges members to solve conflicts without violence. 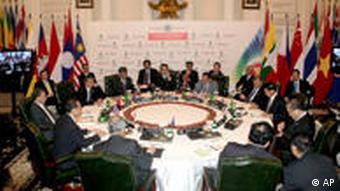 Cambodia had previously taken the conflict over the 900-year-old temple to the UN Security Council, which asked for ASEAN’s participation in solving the problem. ASEAN has been criticized for doing too little to resolve regional disputes. So far, member countries have chosen to solve disputes through bilateral talks or by taking them to international institutions, such as the International Court in Den Haag.

Solving problem on the regional level

Howard Loewen from the German foreign policy think tank, SWP, welcomes ASEAN's change of mind. It’s a sign that the members are ready for the community in 2015, he says. The Southeast Asian expert said conflicts are avoided as a consequence of the countries cooperating more closely in economic, political and security terms."And if there is a conflict like now between Thailand and Cambodia, it is all the more important that they have a way to resolve that conflict," said Lowen further. 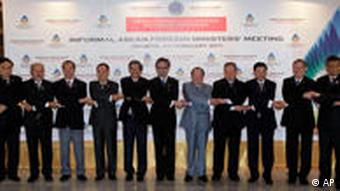 Bandarto Bandoro, a political scientist from the University of Indonesia, sees a big challenge for the organization, which has now been around for over 40 years. He said that it is very important for ASEAN to maintain solidarity and that countries should not hide behind their own sovereignty when something happens where ASEAN has to interfere. He fears that the unity between the countries might be destroyed, if there is a conflict that ASEAN is not able to solve. "Our challenge is to find a way to maintain the harmony during a case that has to be solved in a short time," he said further. Bandoro thinks the Thai-Cambodian conflict is a good test for the new ASEAN Community.

Thai and Cambodian troops clashed before dawn on Tuesday at a disputed stretch of border, a Thai army spokesman said, but a senior Cambodian military official has denied the report. (15.02.2011)

Thai-Cambodian border clashes - that claimed the lives of 11 people and forced 25,000 to flee their homes on both sides of the border - have calmed. But the border issue at the heart of it is far from over. (08.02.2011)

The Thai defense minister has ordered provincial army commanders to renew talks with their Cambodian counterparts in efforts to end four days of cross border fighting near an ancient 11th century Hindu temple. (07.02.2011)