A look at Japan's anti-government protests

Reversing the image of a public that is rarely moved to speak out, thousands of Japanese are taking to the nation's streets to oppose legislation that could send Japanese soldiers to war. Julian Ryall reports from Tokyo. 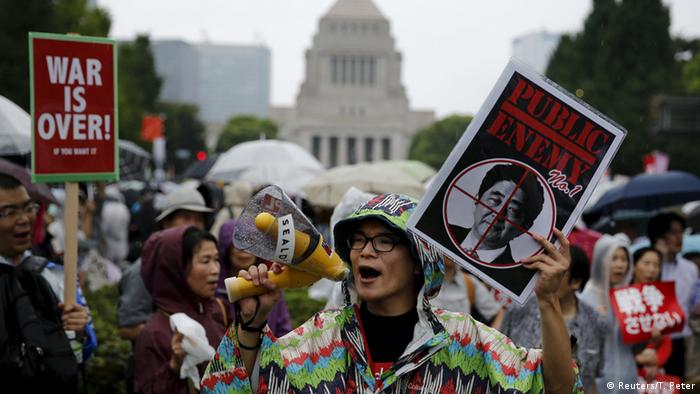 Waving flags and banners and shouting slogans, the protesters come from all walks of Japanese life. There are angry students alongside concerned mothers, union members demonstrating beside lawyers and academics, the musician Ryuichi Sakamoto expresses his feelings in tandem with the historical sociologist Eiji Oguma. All of them are united in their opposition to bills that could see Japanese troops sent overseas on combat operations for the first time since Japan's surrender ended World War II in 1945.

Tens of thousands of demonstrators gathered outside the parliament building in Tokyo on Sunday, while as many as 300 other protests took place across the country on the same day, manifestations of the public's displeasure with the legislation presently being debated in the Diet. A vote on the new laws could take place in the Diet as soon as September 14.

And while privately they admit that the ruling Liberal Democratic Party's overwhelming majority in the Diet means that it is inevitable that it will ram through security bills that they believe trample across the nation's pacifist constitution, the demonstrators insist this is just the start of their campaign. 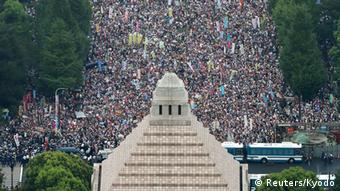 "People are joining this movement from all sides and from every part of Japanese society," Chie Matsumoto, a labor union activist, told DW.

"There are left-wing groups, unions, peace activists, human rights groups, students, citizens' organizations and they all have their own separate groups but they seem to have naturally gravitated together to form this huge and very visible opposition," said Matsumoto, who took part in Sunday's demonstration in Tokyo.

One of the prime movers has been SEALDs, or Students Emergency Action for Liberal Democracy, which is notable because it is almost the only organized and large-scale student movement to emerge since the student protests in Japan in the 1960s.

And there is a symmetry to two movements that are 60 years apart, believes Matsumoto. "There were people with us on Sunday who took part in the student movement in the 1960s," she said. "They were saying that then they had to overthrow [Prime Minister Nobusuke] Kishi, which they did, and now they're going to do the same to his grandson."

Tens of thousands of people have gathered in front of Japanese parliament to protest against security bills they believe to be unconstitutional. The proposed legislation would allow Japanese soldiers to fight overseas. (30.08.2015)

Japan's lower house has passed security bills that for the first time since WWII could allow the country's military to fight alongside allied nations in case of an attack. DW examines the implications of this shift. (16.07.2015)

In June 1960, a state visit by US President Dwight D. Eisenhower to discuss the Treaty of Mutual Cooperation had to be postponed after a preparatory visit by White House officials was badly disrupted by demonstrations. Prime Minister Kishi resigned the following month.

The protestors targeted Prime Minister Shinzo Abe on Thursday, August 3, and there is a growing sense of democracy being railroaded by his administration, Matsumoto told DW.

"The public was very unhappy with the government's efforts to restart the nuclear reactors too soon after the Fukushima accident, and that led to protests on the streets for the first time in generations," she said. "Then there was deep opposition to the secrecy law that the government passed.

"Many of the people who stood up against those policies are protesting again now because there is a real dissatisfaction with how the government is making decisions without the support of the majority of people.

"This is not a democratic government because the voting rate in the last election was only just over 50 percent and only half of those people voted for the LDP," she said. "That's not democracy. This government is acting like a dictatorship."

Japanese society has been taken aback at the vehemence of the demonstrators and the scale of protests that have become a regular occurrence, over different issues, since 2011. Organizers said 120,000 people took part in Sunday's event, although the police put the figure at just 30,000. The true figure is probably around 80,000.

"We have seen a drastic change in social activism in response to this government's policies," admitted Go Ito, a professor of international relations at Tokyo's Meiji University.

"As I see it, this legislation is only a minor change in the law and it does not mean at all that troops are going to be sent overseas the day after the law changes without any conditions attached to their actions," he said. "But that has not been communicated to the public, which has resulted in these expressions of anger by the public. 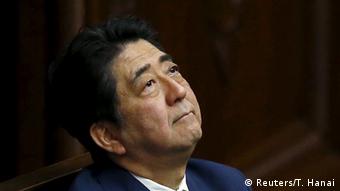 There is a growing sense of democracy being railroaded by Abe's administration, says expert

"The issue has become increasingly sensitive because people believe this government is turning its back on the legacy of Article 9 of the constitution, which forbids the use of war to settle international conflict," Ito said.

Despite the protests, Ito believes the demonstrations will have "little of no impact on changing the direction of the security bills."

"There are simply too many people who are deeply concerned at the recent aggressive actions of China, such as its grab for disputed islands in the South China Sea, for these bills not to go through," he said. "And, if you asked them, I'm sure that a lot of people who have been taking part in these demonstrations would have similar concerns."

Chie Matsumoto says whatever the politicians approve, the protesters will continue their campaign. "I know the bills will be passed in the Diet, despite what some politicians, lawyers and constitutional professors say about their legality, but the struggle will not stop at that point," she said.

"Preparations are already being made for further action, including suing the government through the courts.