A literature festival at the heart of a troubled city

It might well be worth noting on one's literary calender: the Karachi Literature Festival, which took place over the weekend in Pakistan's port city of Karachi. German author Peter Pannke was among the speakers. 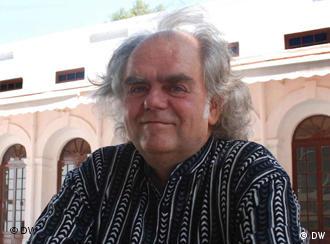 Peter Pannke, a German author on Sufism (mystical Islam) but also a musician well-versed in Indian classical music, participated in the Karachi Literature Festival on the weekend.

Deutsche Welle: Karachi is Pakistan's largest city and as trouble-prone as it is trouble-torn. What was your general impression of its relatively young literature festival?

Peter Pannke: The Karachi Literature Festival is a recent addition to the cycle of festivals in South Asia. I think the model was Jaipur festival which is now in its sixth or seventh year. And the Galle festival in Sri Lanka is now in the third year. And there are also similar festivals in Kolkata and other places. So its like a circle of festivals and quite a few of the authors who meet here, are attending several of these festivals. So it becomes a kind of a circuit. Especially the interest in India on the part of the Pakistani authors is quite high. Quite a few of the Pakistani authors have come back from Jaipur and the Karachi festival sort of ends the festival scene.

You were taking part in a panel discussion on Sufism...

Right. I was taking part in a panel discussion. I also have several books coming up in India as well as in Pakistan. Oxford University Press, Karachi is printing a book of mine on the Sufi tradition in Pakistan which had been published in Germany before.

It is very interesting that you have mentioned this circuit, this sub-continental circuit with which you are familiar. Would you say that there is such a thing as sub-continental literature?

Actually, to define that in national or local or regional terms is not correct any more. The Pakistani writers who are now very much coming up internationally, have all of them lived in England and in the United States. So that's already an international circuit.

Definitely so, because you see at this moment Pakistan is really shaken by the murder of the Governor of Punjab and by all the attacks on the Sufi shrines all over the country, and by the terrible situation about the blasphemy laws. The people who stand up for civil society are just in the process of forming initiatives and so on. So the literature festival brings together really a lot of the Pakistani intellectuals and there is also that very high security. There is something of course like fear. There is a lot of discussion going on about what could be done to really save Pakistan because obviously it's really under threat. People have been watching Cairo on TV all the time, so there is also a hint that something could happen in Pakistan.

Do you see a role for these young Pakistani authors in case a similar movement of whatever kind were to take place in Pakistan?

Mohamed Hanif was in Ramallah a few days ago and he was relating his impressions. His piece in the Dawn newspaper was called - Watching other people's revolution.

Hussein, in an interview with Deutsche Welle, talks about how the year 2010 went for Asian English writers in general, and the South Asian writers in particular. (31.12.2010)