A glimmer of hope for Delhi's mentally ill

Some 50 million people in India suffer from mental health issues, but the country's legislation and infrastructure are by no means fit to address the problem. A pivate initiative in Delhi is trying to make a difference. 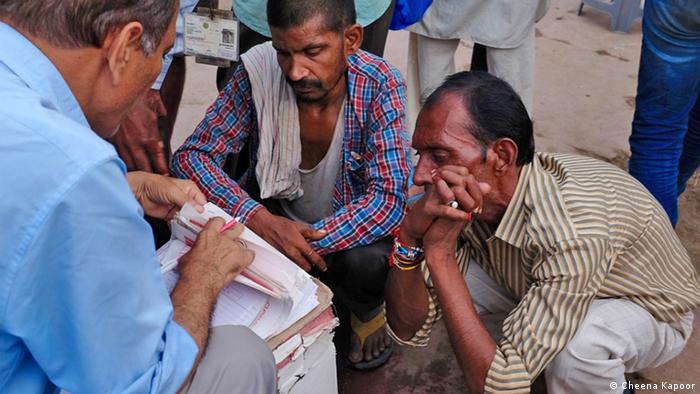 When you walk down the stairs leading to the main entrance of the historic Jama Masjid, Delhi's great mosque, you enter Meena Bazaar with its narrow rows with cramped stalls selling everything from jewelry imitations to plastic toys, clothes and footwear. A few steps across the busy lanes of the bazar you enter Urdu Park, a piece of barren land, where hawkers sit on their haunches to sell second-hand goods and spices. In the middle of this chaotic street market, a psychiatrist and a psychologist sit on chairs, attending to a line of patients.

Twice a week, together with other activists, they come to Urdu Park. Their mission is to help the mentally ill, meet patients and hand out free medicine.

Aashray Adhikar Abhiyan (AAA) was started more than ten years ago to help the homeless people, but today it is also known for its efforts to help the mentally ill. The Delhi-based NGO has established various street clinics in the past years. Since 2008, more than a thousand mentally ill patients have been referred to the street clinics. For the Urdu Park project, it has teamed up with medical specialists from The Institute of Human Behavior and Allied Science (IHBAS), formerly known as Shahdara Mental Hospital. 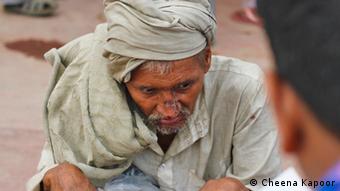 India is in dire need for nearly 54,750 medical and psychiatric personnel

"The primary objective is to improve their quality of life by addressing the core issues the mentally ill people are suffering from," Sanjay Kumar, the deputy director of AAA, told DW. The organization keeps records of the patients who come to the clinic so that their behavioral and overall improvements can be monitored. Also, the NGO provides food, clothing, hygiene items, shelter, and hands out prescribed drugs to the patients.

On a separate chair, the AAA aid workers have put up a container filled with medication for the patients. The surrounding air is filled with an almost unbearable stench of filth, open wounds on the patients' bodies, and a strong chemical odor of drugs.

Sajjan Lal is the supervisor of the street clinic. While he is handling patients' documents, he talks about the various challenges he and his colleagues face. "Many such cases, especially those of the homeless individuals, are referred to us by the local police. We have to consult the magistrate to get the approval before we can actually help the patient. Also, an acute lack of funds for basic medicine and legal obstacles relating to mass distribution of certain narcotics make matters worse for us. The IHBAS helps us in such cases."

The monthly medical expenses of around 25,000 rupees (330 euros) are almost completely covered by AAA.

Some members of the NGO are trained to watch out for behavioral and health patterns of a prospective patient and after a period of eight days decide how to treat them. 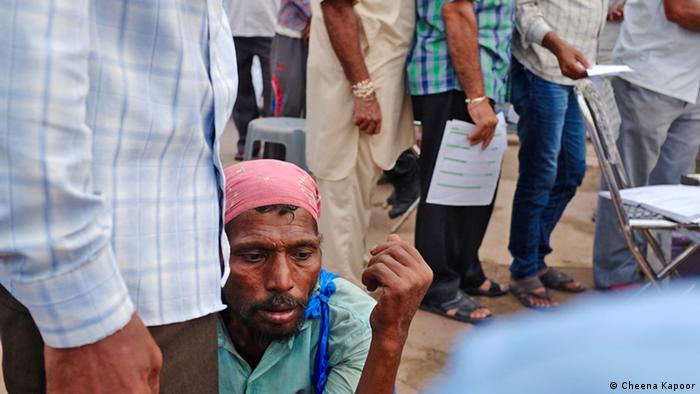 Neglected by their families

"Ritika Sharma, a patient recovered by the police, was referred to the street clinic and later to the IHBAS where after a month-long treatment she was discharged," Lal told DW.

Sonu, a man in his twenties, was first spotted roaming nude near the Kashmiri Gate area of New Delhi and after closely observing his actions for a week was taken to the street clinic where a psychiatrist referred him to the IHBAS.

The ongoing treatment and interaction with the patient revealed that his family lives in Faridabad, about 50 kilometers south of Old Delhi. However, no one has ever turned up to visit Sonu, even after his family was informed about his condition and whereabouts.

The street clinic and the IHBAS are overflowing with cases of patients leading a similar pitiable life who, besides their illness, have to face the insurmountable social stigma and outdated government laws.

Law-making in India is a time-consuming matter. The Indian Lunacy Act dates back to 1912 and was replaced by the Mental Health Act in 1987. Both laws mostly focused on the regulation of mental health care in institutions, rather than addressing the core issues of mental health problems or protecting the rights of the affected people.

The Mental Health Care Bill, drafted in 2013, was passed by India's Council of States, the Rajya Sabha, in early August. It is expected to be presented to the Lok Sabha, the lower house of parliament, before it becomes the official law. 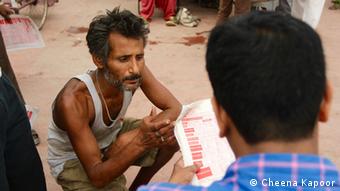 "While this new bill addresses the right to adequate healthcare under the umbrella of medical insurance, it pays very little attention to improving the deplorable condition of the homes and families of the patients," Sanjay Kumar, one of the pioneers of the street clinics, told DW. He thinks that the new legislation also fails to educate and spread awareness about the issue of mental illness. Kumar believes that unless core issues like the dearth of trained professionals and an acute shortage of funds are openly acknowledged and dealt with, it will be difficult to improve the condition of the mentally ill patients.

However, key questions still remain unanswered. Why are there so few mental health professionals and psychiatrists in a country with such a large number of mentally ill patients? A study by the Ministry of Health and Family Welfare estimates that India is in dire need for nearly 54,750 medical and psychiatric personnel, including clinical psychologists, psychiatrists, social workers and nurses. At the moment, the figure stands at 7000.

A Human Rights Watch report has shown that Indian women are at risk in mental hospitals, where many lack basic hygiene and face sexual violence. Hazy government figures have failed to show the true extent of the problem. (03.12.2014)

India: How COVID is hurting the battle against tuberculosis 29.03.2022

India's battle against tuberculosis has suffered a huge setback during the pandemic. An estimated half a million people died of tuberculosis in the country in 2020. Now, New Delhi is battling to make up lost ground.

People in India are dealing with another blow to their health, brought on by the coronavirus pandemic. Some experts think this crisis might outlast the virus.