A foodie's paradise: cookbooks and food culture at the Frankfurt Book Fair

Cookbooks are a sector of the book market unaffected by drops in sales, and they're well represented at the Frankfurt Book Fair. But sometimes, the books are not the main attraction. 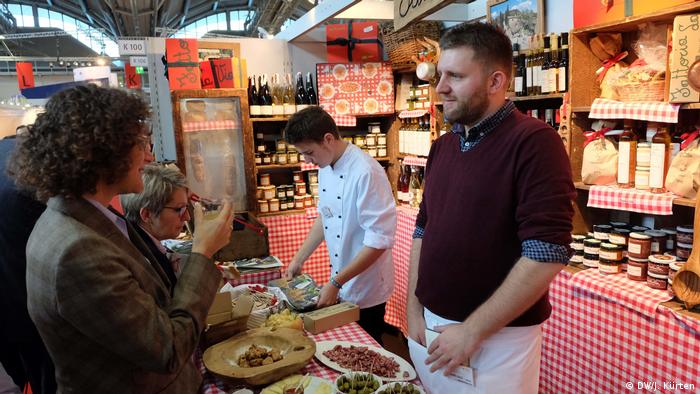 A Flemish beer tasting event, a show with the BBQ world champion and a dumpling party are all taking place in Frankfurt - amidst book stands.

The world's largest book fair has also become a prominent event to promote non-book products - an umbrella term that encompasses every other thing that could be sold in a book shop, from stationary to mugs.

Food and drinks play an important role in that market as well.

There are of course several German and international cookbooks on show at the Frankfurt Book Fair, and those stands are made attractive with free food samples. Yet sometimes the books are not even necessary.

The Gourmet Gallery on the first floor of Hall 3 at the book fair was enlarged this year. It now covers a few hundred square meters to provide enough space for more books and accessories than a foodie could ever dream of. 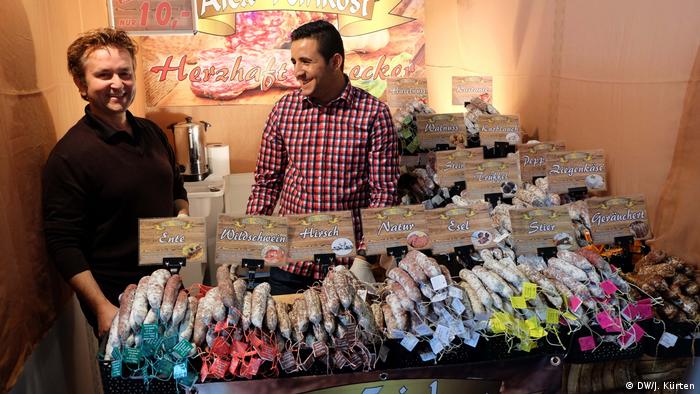 Some food stands don't even have a book to promote

"The Gourmet Gallery has become the annual meeting point of the cooking and food community," Martina Stemann told DW.

Stemann is the organizer of this colorful exhibition space. She confirms that this part of the fair is not only for cookbook publishers: "Kitchen utensil suppliers, different organic food companies, private and public initiatives aiming to promote healthy eating habits," for example, also hold stands and find business partners at the event.

Appealing to the senses

Cooking and cookbooks remain a tactile experience. "Our cookbooks are read in bed, on the sofa, in the bathtub. You don't do that with an e-book," added Stephanie Wenzel, program director of Germany's leading cookbook publisher, Gräfe und Unzer, or GU.

GU's top title for the fall is "Das Prinzip Kochen" (The Cooking Principle). It aims to appeal to young readers who can learn how to cook the "50 most important recipes" without being helped by their parents.

Even though it's a hardcover publication, digital networks will obviously contribute to reaching that market. "We'll promote it through Facebook, Twitter and Instagram, of course. Young people no longer go to bookstores; they order their books on Amazon," said GU's marketing expert Florian Landgraf.

Mouthwatering, with or without pictures

The British publisher Dorling Kindersley, or DK, is also in Frankfurt. They publish, among others, star British chef Jamie Oliver's books.

His latest "Christmas Cookbook" is bound to become a bestseller in the upcoming months. It's "a very personal cookbook, where he reveals his whole relation to cooking and shares several family photos," said DK spokesperson Natalie Knauer. Some books stand out without any mouthwatering photos. That's the case with Peter Heine's new book, "Köstlicher Orient - Eine Geschichte der Esskultur" (Delicious Orient -  A History of Food Culture). The Islamic scholar's book offers some recipes, but it mostly focuses on the cultural history of Oriental food, with chapters answering questions such as "Why is pork forbidden?" and others detailing slaughter rituals and fasting rules.

Through food, the Frankfurt book fair manages to bridge all cultures - from beer tasting to Islam's bans on alcohol and from grill shows to the Middle East's dietary restrictions on pork.

What Jamie Oliver learned from centenarians about superfood

During a visit to Berlin, Jamie Oliver tells DW how he got inspired for his book by traveling worldwide and cooking with 100-year-old people. They've shown him you don't need to be rich to eat like a king. (13.11.2015)

Jamie Oliver and 10 other iconic chefs

Jamie Oliver has revolutionized British cuisine and has been using his fame to promote healthy food. Here are 10 more top chefs who have changed the way we cook food. (11.11.2015)

Every day, artist Ólafur Elíasson serves up a home-cooked lunch for his Berlin studio team. The fresh ingredients, he says, "grow in sunlight, we virtually eat sunlight." Light is also the focus of his artistic work. (13.06.2016)