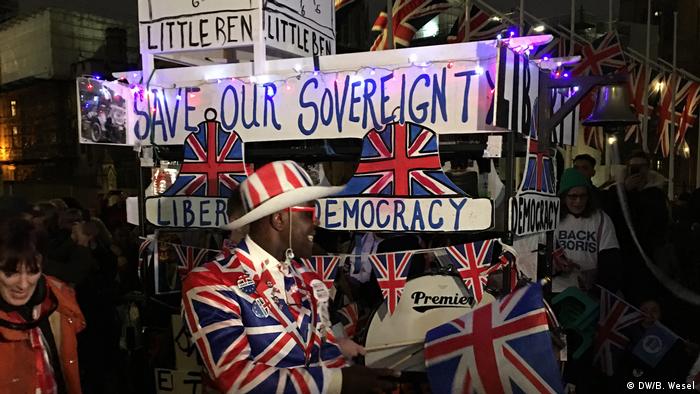 British Prime Minister Boris Johnson promised a "new era of friendly cooperation" with the EU, in an address released an hour before the UK left the now 27-member bloc, as thousands of Brexit supporters gathered to celebrate across the country.

Johnson said there may be "bumps in the road" ahead but vowed that the departure was an opportunity for "stunning success."

He also said Brexit was a chance for a new start and emphasized the country's ability to succeed now it had "taken back control."

"The most important thing to say tonight is that this is not an end but a beginning. This is the moment when the dawn breaks and the curtain goes up on a new act in our great national drama," said Johnson in a pre-recorded speech posted on his Facebook page at 22:00 GMT.

Brexit would give the UK government "new powers" to carry out policies that people in the UK had voted for, said Johnson. These changes would take the shape of "controlling immigration or creating freeports or liberating our fishing industry or doing free trade deals.

A close friendship with the EU

Johnson refrained from criticizing the EU in his speech, saying that the UK and EU had simply "evolved" in differing directions and calling the EU "friends."

"We want this to be the beginning of a new era of friendly cooperation between the EU and an energetic Britain." His sentiments echoed the rhetoric of the EU parliament as lawmakers said goodbye to Britain while stressing the importance of maintaining a close relationship. 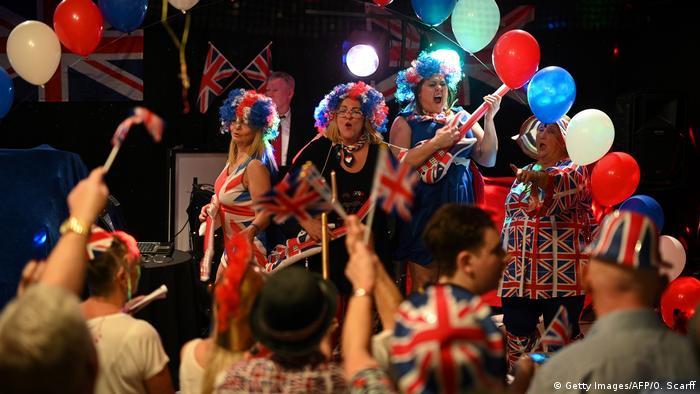 Brexit celebrations were held throughout the country, including Woolston Social Club in Warrington, north west England

Brexit celebrations were held across the country, with a large party in London's Parliament Square organized by Nigel Farage, head of the Brexit Party and a prominent leader of the Brexit movement.

Large crowds chanting "Brexit" gathered in the square to count down to 23:00 GMT, when the UK officially left the EU. The UK government projected a Brexit countdown clock onto the walls of the government offices in London and played a recorded sound of iconic clock Big Ben ringing, as the actual bell is undergoing renovation.

Farage joined the crowd singing the national anthem and later addressed crowds who were waving both Union Jack flags and the English red-and-white flag. "We can celebrate the fact that free from the constraints of the EU, we once again will be able to find our place in the world," he said.

A mixed reaction to Brexit day

Nicola Sturgeon, Scotland's First Minister, tweeted a picture of the EU flag and the words "Scotland will return to the heart of Europe as an independent country #LeaveALightOnForScotland." A majority of Scottish people voted to remain in the 2016 Brexit referendum, in contrast to England where a majority voted to leave.

EU and Scottish government buildings reflected Scottish EU lawmaker Aileen McLeod's request that the EU "leave a light on for Scotland." The Scottish parliament building was lit up in EU colors of blue and yellow, and the European Commission building in Brussels also projected a message showing the rest of Europe's love for Scotland.

US Secretary of State Mike Pompeo said that the US would keep building "strong" ties with Britain following its departure from the EU. "I am pleased the UK and EU have agreed on a #Brexit deal that honors the will of the British people," he tweeted.

Ursula von der Leyen, the European Commission president, spoke to DW, saying that "it's a very emotional day," but she reiterated that the EU and UK "will have a future partnership" due to the many interests and topics they have in common.

Joao Vale de Almeida, the new EU Ambassador to the UK, tweeted he was "looking forward to constructively engaging with British authorities and British people, laying the foundations for a solid EU/UK relationship."