Work is beginning on Europe's first commercial solar thermal power plant in Spain. But a lack of political and economic will means solar power is not realizing its potential as a renewable, clean energy of the future. 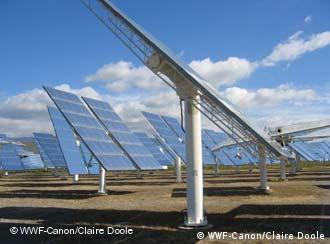 Scientists at the EU research center in Almería, Spain have found the secret to solar thermal energy.

The technology using the sun’s heat to make steam to produce electricity is currently in its infancy. It is still outshone by another type of solar power: the familiar photovoltaic panels which convert sunlight directly into electricity.

But this could change. Europe's first commercial solar thermal power plant is being built near Seville in Spain. It is the result of a decade of research by European scientists at the solar platform center PSA in Almería. They believe that solar thermal power could meet the world's energy needs in the future.

But the political support is missing, he adds. "I think we need a strong political will to promote these technologies because we are still a bit more expensive than conventional power systems and therefore we need some support and subsidies to go into the market."

At PSA, a multitude of mirrors turn and track the sun, directing its rays towards a massive control tower. Here, the energy is used to make steam out of water, which turbines then convert into electricity. 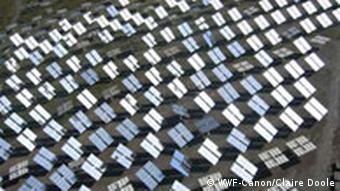 These solar thermal electric panels at PSA are the technology of the future.

This is one of the ways that researchers at the EU solar platform in Almería are looking into how to most effectively concentrate the sun's rays to produce electricity. This breakthrough technology will power Europe's first commercial solar thermal plant near Seville.

It is expected to be completed in 2006. It will be carbon dioxide neutral and be pioneering efforts to reduce carbon dioxide emissions to curb global warming and climate change.

Solar thermal is a technology in its early stages. But some believe it’s the vision for a clean energy future. For now, however, it is photovoltaics that are the only solar power commercially available.

Europe's biggest plant is being built on the same site as the solar thermal facility near Seville. Pablo Martinez from the developers ABENGOA says both solar technologies have potential.

"I believe that in 10 to 15 years time, both types of solar energy -- solar thermal and photovoltaic -- will produce as much power as wind does today," says Martinez. "It will really complement the oil and gas sectors. Of course, the authorities will need to push it a lot for it to get public support."

Solar power only makes up a fraction of Spain's renewable energy sector, lagging behind wind power and bio-energy. Few people have solar panels installed at home, put off by high installation costs and delays. 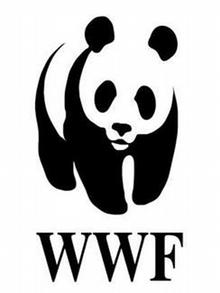 The Worldwide Fund for Nature is trying to raise awareness for renewable energies.

Mar Asunción, head of climate change at WWF Spain, says low public awareness and little political interest have resulted in poor reception to renewable energy. "The lack of political will has developed this situation, because it didn't send the right message to the producers and they didn’t make the switch from fossil fuels to renewables," she says.

WWF is working with the regional authorities to promote a package of renewable energies and energy efficiency in the fight against climate change. But it is an uphill struggle to turn the tide. Spain 's carbon dioxide emissions have gone up by 40 percent since 1990. Like many EU countries, it is currently failing to comply with its Kyoto Protocol commitments.

Deutsche Welle's series of interviews with leading experts of the United Nations Climate Secretariat on how global warming is affecting the planet and what can be done to combat climate change or least mitigate its effects.

The Worldwide Fund for Nature

Further information on how the WWF is tackling the climate change problem.

ESTIF represents manufacturers, national associations and service providers active in the solar thermal sector. It aims to improve the acceptance of solar thermal as a key element for sustainable heating and cooling in Europe.