Once a month, Euromaxx takes you into the homes of creative people across Europe with the "360° Open House". This time it is about a very special apartment in Austria. 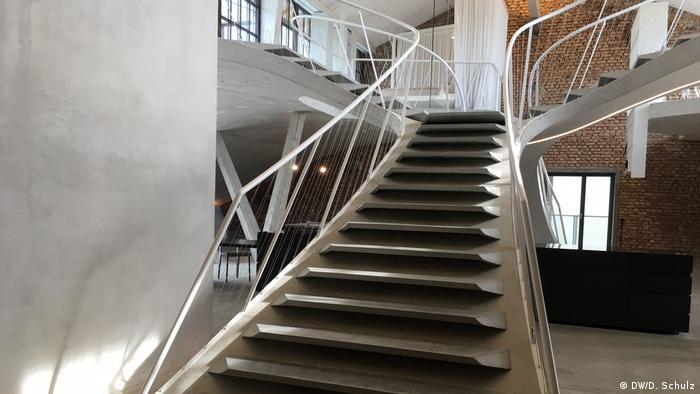 The staircase is reaching over two floors and is designed like a sculpture.

The curved concrete staircase is the centerpiece of this award-winning loft in a former tank hall (Panzerhalle) in Salzburg, Austria.

The Panzerhalle is a brick building, that was built in the 1930s in Salzburg's Maxglan district. It served as a workshop for military vehicles. Starting in 2013, the 18,000 square meter building was converted into a multifunctional event venue, housing a market hall, a restaurant, several exhibition rooms, offices, co-working spaces and a health and therapy center. 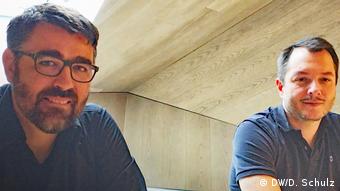 After winning an international competition, Christian Kircher and Philipp Buxbaum from the Vienna studio “Smartvoll” were commissioned to plan the loft apartment on the 350 square meter rooftop of the building. The architects wanted to keep the overall size of the room as well as details such as the historic brick walls.

Besides bricks and white painted steel, they used mainly polished and waxed concrete for their interior design. The room has a total height of eight meters. The glass shower, the lava stone kitchen and the staircase are striking elements. The concavo-convex shaped staircase is also used as a room divider between the living and entrance areas.

The kitchen is made from a lava stone monolith block. And there is a separate relaxation and spa area with a hot tub, and a functional and yet cozy fireplace at the entrance.

Whether it’s a loft in the city, a house by the sea or a cottage in the mountains, "360° Open Houser" presents excellent architecture, creative interior ideas and the people living inside – all over the continent.

Discover this lofty apartment in a former tank hall