Sawdust bread wrapped in barbed wire or a bloody butcher's block: a simple cube of oak wood bearing the traces of WWI was the starting point for the artworks in the exhibition "1914/1918 - Not Then, Not Now, Not Ever." 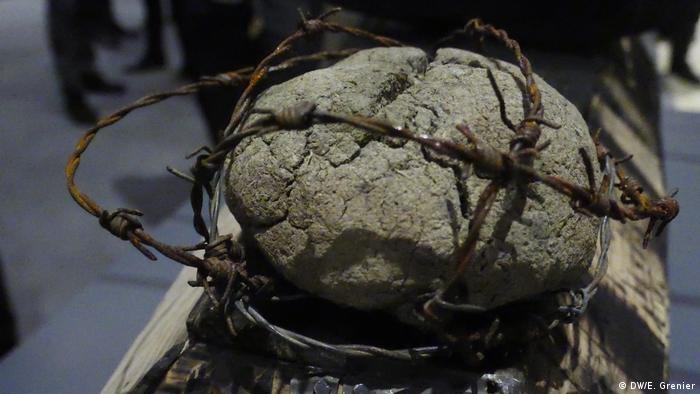 Many areas in northeastern France were completely destroyed during World War I. Because of the vast amounts of human and animal remains and the countless unexploded gas shells and grenades, some areas of the infamous "Zone Rouge" remain off limits to this day. A war that ended 100 years ago still leaves its traces in nature.

The Osnabrück artist Volker-Johannes Trieb, initiator of the project "1914/1918 - Not Then, Not Now, Not Ever," has often worked with wood that bears traces of this conflict. His idea was to get artists from the different countries involved in World War I to work with the same material to create a memorial exhibition underlining the 100th anniversary of the war's end.

Thirty-one internationally renowned artists were invited by curator Mattijs Visser to join the project. Each of them was asked to represent one of the 29 signatory states of the treaties of Versailles and the Paris Peace Conference, along with Russia and Ukraine, which had signed a separate peace treaty before the other countries. "We were surprised to see how quickly the artists accepted," he said.

Wood that witnessed the war

Each of them was given a cube of wood of 30 x 30 x 30 centimeters (approximately 12 cubic inches) that would serve as the starting point for their work. The wood came from the Hirtzbach forest in Alsace, one of the disputed fronts of the conflict.

The trees show discolorations from the pieces of projectiles they hold. "Such power and history come in the wood," said Australian artist Fiona Hall, who had traveled to Berlin for the opening of the exhibition in the German Reichstag on Wednesday. She created a sculpture that includes a loaf of sawdust bread wrapped in barbed wire, referring to the shortage of flour that led people to actually bake with sawdust during the war.

The series of works offers different perspectives on the conflict. Some of them only applied minimal alterations to the block and gave the work a title that tells a story of its own. For instance, Portuguese artist Pedro Cabrita Reis added small holes to his block, entitled Ares, the name of the Greek god of war; the Bulgarian Nedko Solakov added dashes of ink to portray his Dead Warriors.

American artist Kiki Smith gave her piece, which features a golden oak leaf and an acorn on a blackened piece of wood, a title that is practically a short story: There was a fire extinguisher business on Broome Street whose sign said 'what burns never returns' but in the case of some seeds it is necessary for there to be fire in order for them to open.

Other artists left their work untitled, allowing trademark elements of their style to take over, whether nails in the case of Günther Uecker (Germany) or non-reflective red pigment for Anish Kapoor (India). 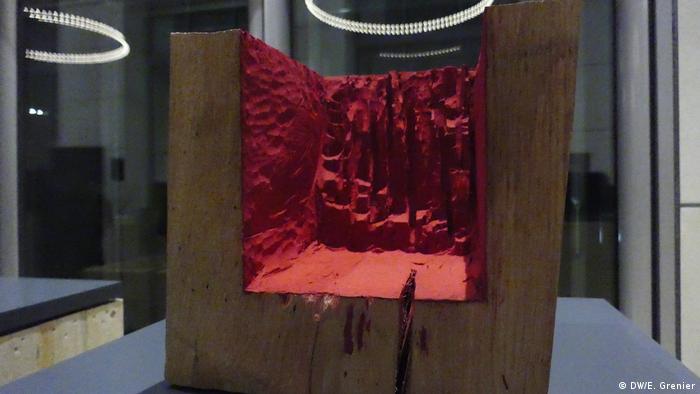 In some cases, the cube of wood was completely transformed. New Zealand artist David McCracken shred it into wood shavings and placed it in a box as protective material for his stylized sculpture of a bomb. The Ukrainian artist Aljoscha burned his block, allowing the particles of the smoke it produced to spread throughout the world; the ashes are integrated into a pink silicon installation representing "how humans are biologically predestined to violence," he said. 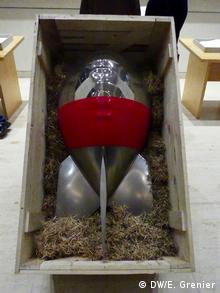 "The artists all had an immense respect for the material," said curator Visser. Even though he was hoping to get works symbolizing peace, many of them came up with propositions that rather dealt directly with war.

However, Visser added that, no matter how dark the works are, "they all serve as a memento mori," or artistic reminders of mortality, "that make us more aware of the value of life."

Echoing this idea, Wolfgang Schäuble, President of the German Bundestag, said at the opening of the exhibition, "Our remembrance of the year 1918 shows that neither peace or democracy can be taken for granted," referring to the fact that the period of peace following World War I didn't last long.

The name of the project borrows from the title of a book by Truus Menger-Oversteegen, a Dutch woman who was a resistance fighter against the Nazis. "Not Then, Not Now, Not Ever" can be seen as an call to continuously resist war, as deadly conflicts still affect European countries and the world to this day. 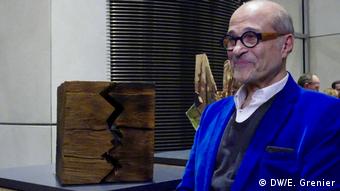 At the exhibition, artist Jean Boghossian didn't hesitate to touch his work as he discussed its meaning, showing how his sculpture was divided in two pieces that were actually complementary. Double World shows the tension between conflicting parties, the losers and the winners of the world threatening each other with their sharp edges, "yet the two pieces of wood are also designed to fit perfectly well together if they communicate," the sculptor said. "I'm an optimist, and I hope that's what they will do."

What is the origin of war? Why do humans resolve disputes through mass killing? Is war inevitable? A unique exhibition in Vienna draws on new archaeological research to trace the evolution of war across 7,000 years. (23.10.2018)

French President Emmanuel Macron has started a six-day tour of World War I battlegrounds. German President Frank-Walter Steinmeier attended a concert with him at the cathedral of Notre Dame de Strasbourg. (04.11.2018)