What is the origin of war? Why do humans resolve disputes through mass killing? Is war inevitable? A unique exhibition in Vienna draws on new archaeological research to trace the evolution of war across 7,000 years.

"War. Tracing an evolution," a timely new exhibition hosted by the Natural History Museum Vienna (NHM), marks 100 years since the end of the First World War in 1918, and 400 years since the beginning of the Thirty Years' War in 1618. Mapping the often senseless evolution of war via a growing body of compelling archaeological and anthropological research, the exhibition also digs deep into some of Europe's most brutal hostilities.

In cooperation with the Saxony-Anhalt State Museum of Prehistory, "War. Tracing an evolution" postulates on the initial evolution of massacres and mass killing by showing how "the earliest conflicts between humans in the stone age might be the predecessor to wars," Christian Köberl, director general of the NHM, told DW.

Battered skulls discovered in the oldest battlefield in Europe in Mecklenburg dating to 1200 BC show, for instance, how wooden clubs were wielded to devastating effect during ancient regional disputes.

The archaeological exploration of war has become a fast-growing research field in the last two decades: battlefields and fortifications have been dug up, mass graves recovered, innumerable skeletons with battle scars investigated, while pictorial representations of war and historical texts have also been analyzed. 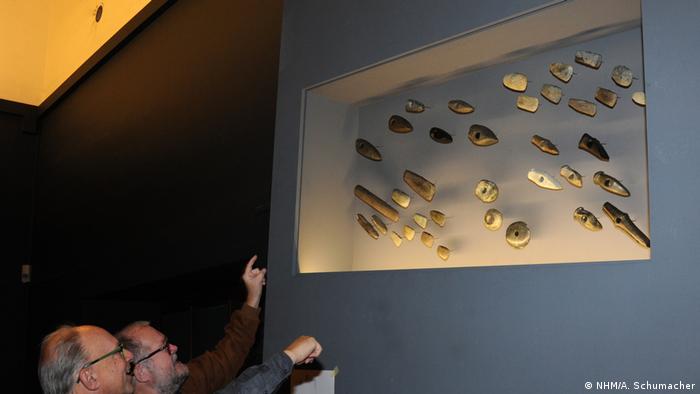 Basic stone age tools that evolved into weapons of war

"War. Tracing an evolution" draws on this material to show how basic hunting or agricultural tools evolved into weapons, how duels between two people transformed into mass murders, or how the mythical war hero became a nameless soldier serving as cannon fodder.

"The main focus in on trying to use archeology and anthropology to derive information about past wars and the fate of their victims," Köberl explained. The exhibition gives context to the fact that, according to the Global Peace Index, only 10 countries in the world were conflict-free in 2016.

The face of war

The horror and trauma of war is particularly revealed through the remains of a mass grave discovered at the site of the Battle of Lützen in Germany in 1632 during the Thirty Years' War.

Fought between the Swedish and Holy Roman Empire armies in just over six hours, the battle saw more than 6,000 men slaughtered in the fields around the small town between Leipzig and Naumburg. In 2011, researchers dug out a 55-ton earth block which, now fixed to a wooden and steel structure in Vienna, shows the remains of 47 soldiers who died in the battle.

Researchers have investigated the 47 bodies found in the mass grave and have reconstructed significant details about the victims and the causes of death, thus giving an identity to nameless soldiers who had long been forgotten. 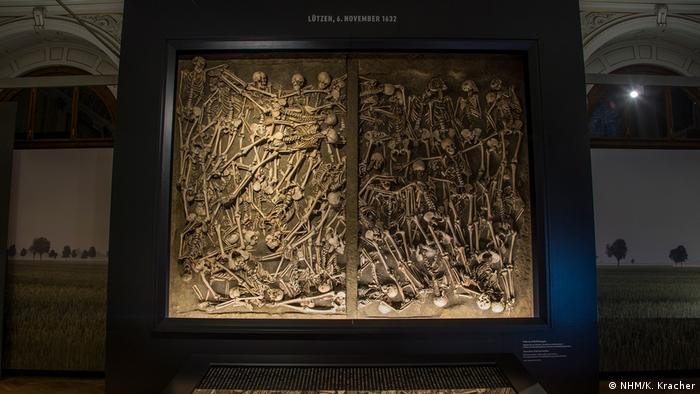 So while the exhibition offers a plethora of facts and information about the wars themselves and also presents some of the objects used — 2,700 lead bullets fired from pistols, carbines and muskets that were found with metal detectors on the Lützen battlefield, the "focus is mainly on humans, both active participants and victims, and their fates," Köberl said.

In this way, a forensic-anthropological investigation of the bones of soldiers who were killed during the Napoleonic war on the battlefields of Asparn and Deutsch Wagram give personal insight into the destinies of individuals who perished during the battle.

War to end all wars

The exhibitions's search for the first traces of war begins with the display of 7,000-year-old weapons and ancient human skulls bearing the scars of battle, including evidence of the oldest-known human massacre in Schletz, Lower Austria.

The destructiveness of war, even for survivors, is demonstrated by crude prostheses designed for mutilated soldiers after the First World War that form part of the Collection of Anatomical Pathology of the NHM Vienna.

The so-called "war to end all wars," which killed some 40 million people, was unprecedented in its scale and is the logical endpoint for the exhibition as NHM holds the world's largest collection of objects derived from from this global conflict — which are held in a separate location, the appropriately named Fool's Tower.

“War. Tracing an evolution” is part of the European Cultural Heritage Year 2018, and runs October 24 through April 28, 2019. Click through the picture gallery above to view more highlights from the exhibition.

The award, worth more than a million dollars, has been given jointly to Denis Mukwege and Nadia Murad for their efforts to end the use of sexual violence as a weapon of war. Murad is the second-youngest laureate. (05.10.2018)

The UN said deliberately targeting and murdering civilians are serious violations of international humanitarian law that amount to war crimes. UNAMA has called for a peaceful settlement to the conflict. (10.10.2018)

Endless war: The rise of our mania for weaponry

When did humans start fighting wars? Is war part of human nature and, therefore, inevitable? A new exhibition at a Vienna provides vital archaeological perspectives on an age-old question. (23.10.2018)