Belgium was the first victim of World War I. Historian Herbert Ruland tells DW about the German invasion 100 years ago and its effect on relations with Germany and Belgium's German-speaking minority. 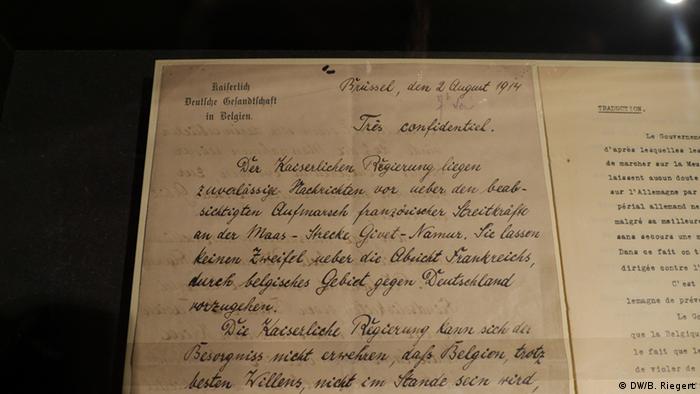 DW: Dr. Ruland, in 1914 Belgium was a neutral country. The German army still invaded. How great was the shock for Belgians on August 4? Or was the war not unexpected?

Herbert Ruland: The war was not unexpected. Let's go back to the assassination in Sarajevo on June 28, when a Serbian nationalist assassinated the Austrian heir to the throne. The people in Central Europe thought this was only a Balkan crisis that they had nothing to do with. The people who could afford it were away on holiday.

But with the Austrian ultimatum to Serbia, then the declaration of war on Serbia, and the entry into force of the European alliance systems, it was clear that the war would not be limited to the Balkans and that the countries of Central Europe would be affected.

On July 31, even before the German mobilization, Belgium and the Netherlands announced their own mobilization. On August 2, the Belgian government received the Germans' ultimatum demanding free passage across Belgium for its troops. This, of course, it rejected, and beginning August 2, it became obvious to all Belgians what was going on. 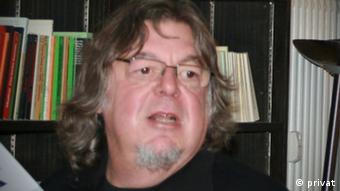 Herbert Ruland is a specialist in the German-Belgian border region

Here in the border region, fortifications around Liège were prepared for combat. Trees were cut down, houses demolished and walls built. Roads were torn up at the border. Trains stopped crossing the border on August 2. Food quickly became scarce. Horses and cattle were requisitioned. The people realized what was happening.

In Germany ,it's not well known and hardly publicized that the imperial forces acted with brutality and impunity against the Belgian civilian population. There were massacres, war crimes, crimes against humanity, as we would say today. The following four years of occupation brought hardship and misery. How did Belgium's view of Germany change?

Completely! Here in the border region, there really was no frontier before 1914. People went to wherever they found work. The beginning of the war represented a complete break with this.

In the first week, German soldiers murdered 950 civilians between Aachen and Liege. Hundreds of houses were burned down intentionally. That still affects the German-Belgian relationship today, particularly among the Walloons in French-speaking southern Belgium.

Many people on the Belgian side who were in both world wars say World War I was worse than the second. Indeed, the fighting took place here in this country. The repressive policies against the civilian population, even after the invasion in August 1914, continues to shape opinions today. 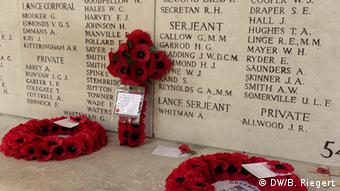 Belgium was never completely occupied during the World War I. Western Flanders was a battlefield for four years. There, the Belgian Army, the British and many other allies fought against the Germans. How important was this for the Belgian government, the Belgian nation?

Incredibly important! You have to imagine one thing: The area that was still held by Belgium was only 800 square kilometers in size, the last tip of West Flanders. The French repeatedly demanded that King Albert march there and fight on the Somme (the river along the front in northern France]. The king demonstratively rejected this. For he knew that if he left, then he'd probably not be going back to his country.

For Belgium, this fight at the Yser [river in West Flanders] probably meant its survival as a nation. It was an incredible story.

Belgian losses were also relatively limited, because the Belgians fought mainly in the trenches. They were not actually as heavily involved in the offensive. The major offensive was at Passchendaele in 1917, where the British recorded 400,000 dead and wounded in four months as they advanced eight kilometers (five miles). Incredible battles, but the Belgian losses were relatively small.

Let's look again at your home region, the German-Belgian border. In 1914, at the outbreak of the war, the districts of Eupen and Malmedy belonged to the German Reich, and were thus part of the aggressors. In 1920, they were finally given to Belgium. The German-speaking inhabitants were first German, then Belgian. What effect did that change have on the people? 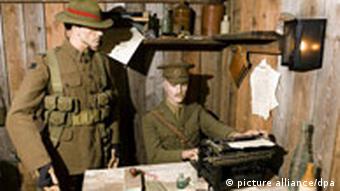 The Memorial Museum Passchendaele near Ypern

As I said, the year 1914 represented a complete break with the past. Before then, there were cross-border marriages, people went on pilgrimages across the border. They spoke the same dialect on both sides of the border.

Our region here - Eupen, Malmedy and also Aachen - was the region from which the invasion began. In 1918 the Allies then marched in here. Aachen in Germany was occupied by the Belgians. Eupen and Malmedy were awarded to Belgium by the Treaty of Versailles, which was confirmed definitively by the League of Nations on October 20, 1920.

I can tell you, most people felt they had been betrayed and sold out in Eupen and Malmedy. Since the beginning of the century, there had always been problems with the Prussians, but the people had become part of Germany. They felt German and without asking the people, they made them Belgians. Beginning in 1925, when the area was made equal to the rest of Belgium, most voters chose pro-German parties. In 1933, after the Nazi seizure of power in Germany, a so-called patriotic front formed along the lines of the Nazi Party. The population was then split into pro-German and pro-Belgian. 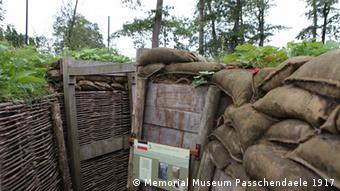 Visitors to Belgium can walk the trenches

When the Germans invaded for the second time in 1940, most people in Eupen and Malmedy were in favor. Pro-Belgian individuals had already fled to inner Belgium. Eupen firefighters hoisted the swastika flag. On Eupen town hall hung a large poster, not put there by the Germans, but by Eupen Nazis: "Führer, we thank you!" So that led to a revisionist movement, which some pro-Belgians resisted. But at that moment the pro-German movement was stronger.

After the Second World War the area was returned to Belgium. After the wars, there was ultimately a reconciliation between the Belgians, the Germans and the German-speaking Belgians. Is this, as German President Joachim Gauck put it, something close to a miracle after everything that had happened?

This is indeed a miracle. In the first years after the war, the population in Eupen and Malmedy faced hard times. Throughout Belgium, every 60th person was put on trial for collaboration. In the German-speaking region, it was every third or fourth. Anyone who fought in German uniform was thrown in jail at first. The borders with Germany were initially closed, but the German-Belgian relationship then amazingly stabilized in a relatively short time.

Herbert Ruland is a historian at the Autonomous University of the German Community in Belgium. The German-born teacher and researcher lives in the Belgian town of Eupen and is considered an expert in the history of the Belgian-German border region and World War I. The 70,000 German-speaking residents along the eastern border with Germany now have a protected status as an autonomous minority in the Kingdom of Belgium.

The French and German presidents met Sunday in Alsace to commemorate the outbreak of the First World War. Thousands died a senseless and gruesome death on Hartmannswillerkopf mountain near the German-French border. (03.08.2014)

100 Years Ago - The beginning of World War I