15.4 million people are learning German as a foreign language 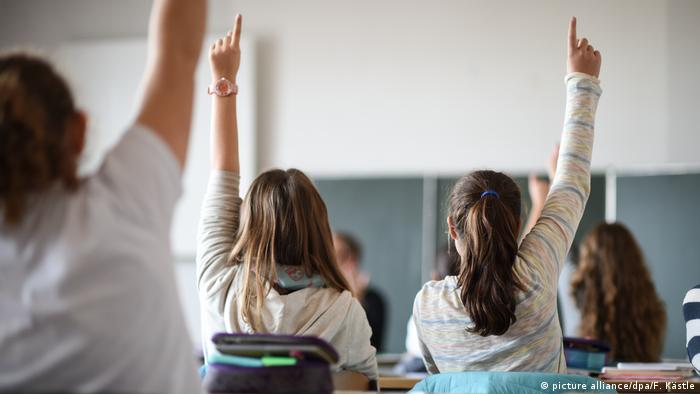 How many people around the world are learning German as a foreign language? Every five years, the German Foreign Office aims to answer this very question. Their most recent findings were published in a 56-page report presented in partnership with Deutsche Welle, the Goethe-Institut and DAAD in Berlin on June 4.

The data shows that the number of German language learners at schools, universities and language institutes around the world hasn't changed dramatically since the last survey in 2015, increasing only by several thousand people.

Michelle Müntefering, Minister of State at the Federal Foreign Office, is delighted by the rise, however slight: "Learning German as a foreign language creates a bond with Germany," she said. "We want as many people as possible to become enthusiastic about our country."

Conducted every five years, the study is called "German as a foreign language worldwide" and began in 1985. While the current figure of 15.4 million is by no means a poor showing, the number of German learners peaked in 2000 when 20.1 million were learning the language. It's important to note that the survey does not, however, include those learning on their own.

Read more: Denglish: How to use English to sound like a true German

Europe continues to lead the way

The undisputed winner of the continent with the most German learners is Europe, where around 9.3 million people are learning the language, despite the tongue-twisting grammar and tricky case system.

In some countries, the number of German-learners is on the rise. An increase of up to 62% was recorded in Denmark, the Netherlands and France, while the number of learners in other countries took sharp dips.

In Poland, for example, there were 15% less students of the German language, and in the UK the number dipped by 25%. Müntefering stated that Brexit was likely the primary cause for the decline. Statistics pertaining to individual regions can be found in the infographic published in the study.

Learning online during the pandemic

With so many people staying indoors during the coronavirus pandemic, it should come as no surprise that interest in Deutsche Welle's online German courses has increased dramatically. Data recorded by DW shows an increase of over 100% in visits to the online course materials website between January and April 2020.

The number of page impressions rose by approximately 140%, which means that these resources were not only used more frequently, but also more intensively. "The coronavirus pandemic and the associated restrictions have brought the importance of digital components in knowledge transfer into focus," says DW Director-General Peter Limbourg. In the future, he hoped that politicians would support "new digital possibilities for disseminating German language and culture around the world."

Despite improvements, the German government's latest report on the state of immigrant integration noted major gaps in education. Calls are now growing to make German language tests a requirement to enter school. (03.12.2019)

German to go – on the road and at home

Learning is becoming digital in the time of Corona. With Deutsche Welle's online offer it is not only easy but also entertaining to learn German at home. There is something for every language level! (19.04.2020)

New government figures estimate that 1.2 million Germans live elsewhere in Europe. Almost half stayed where there was no language barrier — and roughly a quarter plumped for a more accommodating tax code, too. (06.05.2020)