Using coasters in pubs to improve understanding of the teachings of Islam in Germany is not going down well with some Muslim groups. They believe the connection between alcohol and the religion is unwise. 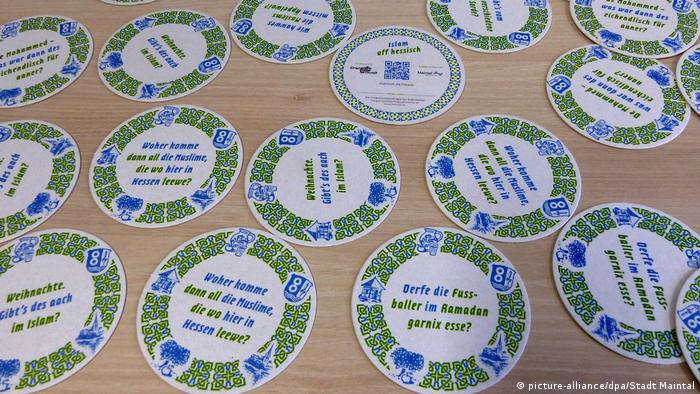 The distribution of Islam-related questions on beer mats in the towns of Maintal and Offenbach near Frankfurt has been harshly criticized. The mats show questions on Islam written in the local Hesse dialect. On the back, a QR code can be scanned that directs mobile users to the city council's website, where the answers can be found.

The initiative was supposed to promote dialogue and understanding of Islam among non-Muslims.

However, the idea has backfired, as Salih Tasdirek, the Turkish-born chairman of the city of Maintal's advisory council for foreigners, who has lived in Germany for almost 40 years, believes Islam should not be associated with alcohol.

Apart from being distributed in pubs, the coasters also show a Bembel on them, a pitcher used for the regional alcoholic specialty that is similar to cider.

Tasdirek told Spiegel Online he finds inter-religious dialogue and exchange good but "why should that mean going to the pub? You could have done a postcard action or bus advertising."

"We were not consulted on this matter," he told public radio Hessischer Rundfunk.

Maintal and Offenbach councils distribute the mats, which were complied by Islamic scholars, in pubs and restaurants. There have been similar initiatives in the southwestern city of Freiburg, where students first came up with the idea, and in the eastern state of Saxony.

The Integration Commissioner for Maintal, Verena Strub, disagrees with Tasdirek. She said it is a case of bringing the "big social issues into conversation" and sees this action as part of it. "I can understand that someone associates the coasters with alcohol, but not that anyone associates Islam with alcohol just because the questions are on the coasters."

Strub told public radio that the intention was to inform "in a relatively neutral and humorous way."

"The questions and answers are also formed by Muslims," ​​said Raban Kluger, who organized the initiative. The texts were created by Aiman ​​Mazyek of the Central Council of Muslims and the National Center for Civic Education Freiburg. Kluger assured: "It is not our intention to associate Islam with alcohol."

World's alcohol consumption expected to rise 17% in next decade

Alcohol consumption is expected to increase 17% over the next decade after rising steadily for the last two, the medical journal Lancet has found. Half of all the world's adults are expected to be drinking by 2030. (08.05.2019)