With Robert Mugabe's political days numbered, the ruling ZANU-PF party has sacked him as leader. Its Central Committee says he must resign as president by noon Monday or impeachment proceedings will start. 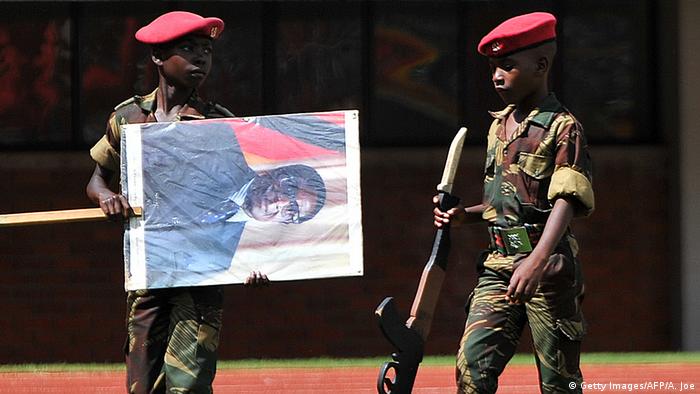 The central committee of Zimbabwe’s ruling ZANU-PF party on Sunday removed President Robert Mugabe from his post as party leader. The party also announced that it had appointed Emmerson Mnangagwa in his place.

Mugabe's deeply unpopular wife, Grace, was also thrown out of the party.

A day after the country erupted with joy at the prospect of an end to the Mugabe era, it is the first formal step that has been taken to remove him from office. The meeting comes ahead of a second round of talks between Mugabe and the army commander on finding a dignified end to the aged ruler's presidency.

ZANU-PF official Obert Mpofu, who chaired the meeting said,  "(Mugabe's) wife and close associates have taken advantage of his frail condition to usurp power and loot state resources. Our people are demanding ... the recall of the president and first secretary of ZANU-PF from his position in the party." 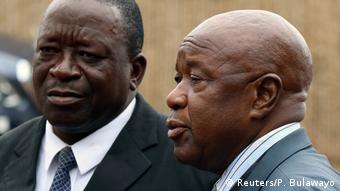 Chris Mutsvangwa, who led the campaign to get rid of Mugabe, said that the party meeting’s agenda also includes reinstating former Vice President Emmerson Mnangagwa and removing the president's wife, Grace Mugabe, as head of the ZANU-PF Women’s League.

"We are going all the way," Mutsvangwa told the Reuters news agency on his way into the meeting, also saying that he thinks Mugabe should just resign and leave the country. "He's trying to bargain for a dignified exit, but he should just smell the coffee and gap it."

The Central Committee said Mugabe must step down as president by noon on Monday, or impeachment proceedings would start when parliament resumes on Tuesday.

Former Mugabe supporters are turning from the beleaguered nonagenarian in droves. The influential ZANU youth league issued a statement on Sunday calling on Mugabe to step down, and for his wife, Grace, to be thrown out of the party.

The Youth League has previously been extremely loyal to Mugabe, but now says he should resign "so that he can rest as the elderly statesman he is."

Impeachment set for next week

Zimbabwe's main opposition party, Movement for Democratic Change - Tsvangirai (MDC-T), has said it will "definitely" put in process a motion to impeach Mugabe, adding that there have been discussions with the ruling ZANU-PF party.

MDC-T party member Innocent Gonese told the Associated Press news agency, "If Mugabe is not gone by Tuesday, then as sure as the sun rises from the east, [the] impeachment process will kick in."

The Herald, a state-run newspaper in Zimbabwe, confirmed that Mugabe met with army leaders who seized power from him last week.

It is alleged that the military would prefer Mugabe to voluntarily resign for the sake of creating a veneer of legality in the leadership handover. There is speculation that Mugabe may be using whatever power he has left to try to preserve his legacy as one of the leaders of Africa’s liberation, or perhaps to protect himself and his family from prosecution.

The talks are believed to be going ahead without the South African delegation that was involved in the first round. South Africa’s President, Jacob Zuma, on Saturday described the negotiations as being in the "early days."

Next Tuesday, the Southern African Development Community (SADC) will discuss Zimbabwe's political crisis when it meets for a four-day summit in the Angolan capital, Luanda.

Things must not 'go back to normal' after this week's events in Harare, says ZAPU opposition party leader Dumiso Dabengwa. DW correspondent Victoria Schneider spoke to the former interior minister in Johannesburg. (17.11.2017)

Several major world powers and even members of the president's party have indicated they would like to see President Mugabe resign. Most branches of his ZANU-PF party have passed votes of no confidence against him. (17.11.2017)

Zimbabwe's military takeover has caught the attention of the world – but could China have known about the coup? Beijing has long been a close ally, and Zimbabwe's top brass recently paid a visit to leaders in Beijing. (16.11.2017)