Grace Mugabe is suing a diamond dealer over a ring purchase gone sour. The presidential family's spending habits face scrutiny in light of the economic struggle faced by most of their compatriots. 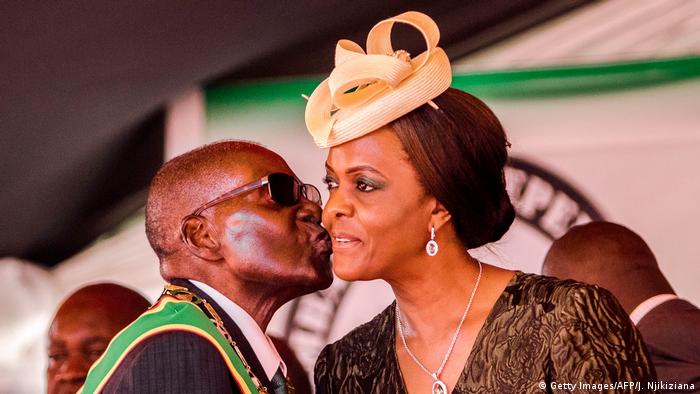 The wife of Zimbabwean President Robert Mugabe has sued a businessman for allegedly failing to deliver a 100-carat diamond ring worth $1.35 million (€1.14 million).

Grace Mugabe had ordered the ring in 2015 to celebrate her 20-year wedding anniversary. Mugabe's lawyer Wilson Manase on Wednesday said his client was instead offered a ring valued at $30,000.

Read more: Africa is rich in diamonds but still poor

Zimbabwe's state-owned newspaper The Herald reported that Mugabe refused to take possession of an inferior ring and demanded a refund, but the dealer, who The Herald described as "fugitive Lebanese businessman Mr. Jamal Joseph Ahmed" only paid her back $120,000.

Mugabe was suing Ahmed for the balance, the newspaper reported. It's the latest episode in a long-running legal saga over the diamond ring dispute. In January Ahmed went to court in an attempt to stop Grace Mugabe from seizing his properties in Zimbabwe over the spat. Mugabe has denied attempting to seize the properties.

Hamed told the Reuters news agency from Belgium that he had not been served with the court papers. His Harare-based lawyer, Beatrice Mtetwa, said she had not seen the papers.

"We have not received anything at all and I am not in Harare to be served any claim or false allegations," Hamed said.

Grace Mugabe is an influential figure in the longtime president's ruling ZANU-PF party and is seen as a potential successor to him. Critics have dubbed her "Gucci Grace" in reference to her reputation for extravagant shopping trips. Robert Mugabe is also known for his lavish spending habits, including a 93rd birthday party this year which cost the country up to $2 million.

Read more: Zimbabweans stock up on essentials amid fears of hyperinflation

Zimbabwe is facing a mounting economic crisis and the UN World Food Programme reports that 63 percent of the country's population lives below the poverty line.

South Africa has granted Zimbabwe's first lady diplomatic immunity, allowing her to fly home. Mugabe was accused of assaulting a model she found with her sons in a Johannesburg hotel. (20.08.2017)

The wife of President Robert Mugabe has claimed diplomatic immunity after being accused of assaulting a South African model. Many Zimbabweans have condemned her behavior. (16.08.2017)