Robert Mugabe's former ally, whose sacking triggered the chain of events that led to the president's resignation, has returned to Zimbabwe. Emmerson Mnangagwa could be sworn in as president on Friday. 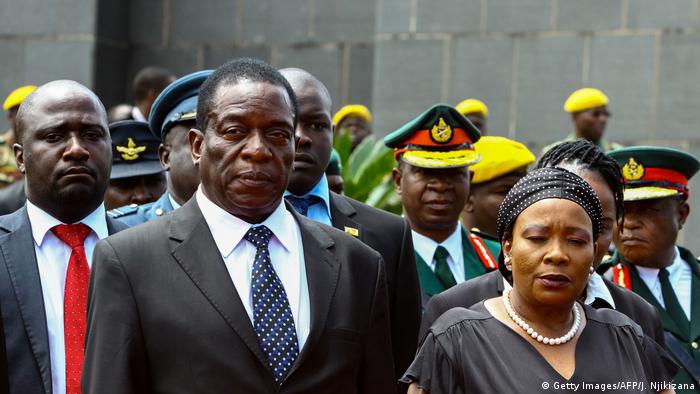 Emmerson Mnangagwa will be sworn in as president of Zimbabwe on Friday, state media reported on Wednesday, following the shock resignation of Robert Mugabe after nearly four decades in power.

The former vice president — who fled for safety after Mugabe sacked him two weeks ago — arrived in the capital Harare late Wednesday afternoon. Upon his arrival, he addressed his supporters, saying a new chapter had started in his country's politics.

"Today, we are witnessing the beginning of a new unfolding democracy," Mnangagwa told the cheering crowd in his first public speech since returning to the country. Thanking Zimbabwe's defense forces for peacefully taking over control of the southern African nation, the 75-year-old said he felt "great respect, humility and profound gratitude."

"The will of the people will always succeed. I pledge myself to be your servant," Mnangagwa added. He also talked about Mugabe's alleged plans to have him killed after firing him for being "disloyal" to him earlier this month - a move that forced Mnangagwa to flee to neighboring South Africa.

"I said to myself, I should not wait for them to eliminate me, but with you, the people of Zimbabwe, make our voice heard," Mnanagagwa explained.

The bloodless coup and its aftermath

The German DPA news agency reported that after his return to Zimbabwe, Mnangagwa was driven to a private meeting with Mugabe, and then the army leadership. Mnangagwa's sacking by Mugabe had at least partially prompted the military takeover that eventually forced Mugabe out of power. The bloodless coup brought an end to Mugabe's 37 years as president of Zimbabwe, with the ruling party Zanu-PF urging him for a week to step down.

In the hours before Mugabe's eventual resignation, Mnangagwa called on Zimbabweans to work together in the interests of the country.

"Never should the nation be held at ransom by one person ever again, whose desire is to die in office at whatever cost to the nation," Mnangagwa had said in a statement issued from hiding on Tuesday. His arrival back in the capital Harare was widely awaited, as thousands of Zimbabweans had been waiting for hours in the hot sun in front of the Zanu-PF headquarters in the city centre in the hope their new leader would address them.

Some Zimbabweans, however, remain skeptical that 75-year-old Mnangagwa, a former ally of Mugabe, will bring real changes to the country. The former defense and justice minister — who earned the nickname "crocodile" during the decades he served as Mugabe's enforcer — has been dogged by allegations of human rights abuses.

Many opposition supporters believe he was instrumental in the army killings of thousands of people, when Mugabe moved against a political rival in the 1980s.

People were seen dancing in the streets of Harare late into the night on Tuesday as they celebrated the downfall of the 93-year-old dictator.

"Everyone is happy; it's a new future," Francis, a domestic servant in his 60s, told DPA on Wednesday. "Now everyone wants to know what's happening next."