He has finally stepped down. The era of Robert Mugabe has ended. His successor Mnangagwa must harness the momentum to build political bridges — otherwise the turning tide could take him with it, says Claus Stäcker. 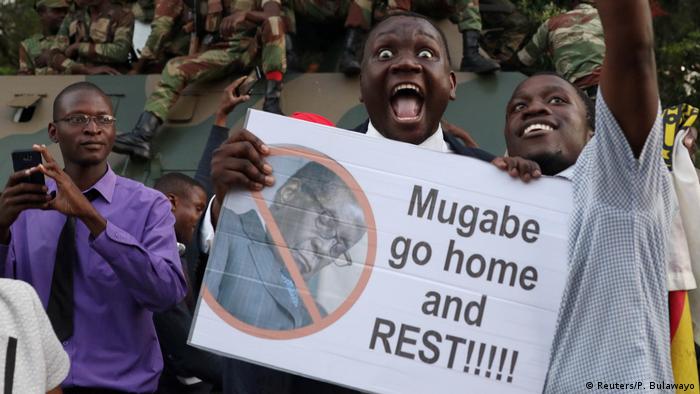 Sometimes, spring takes a little longer to arrive. For two days the 93-year-old clung to the presidency, rambling on about the next party conference under his leadership in a bizarre TV appearance that unsettled not just his obedient generals, but half the world. The people of Zimbabwe, who had already begun celebrating, held their breath in horror. The shadow cast by the dictator is long. But soon after Robert Mugabe resigned — as parliament, controlled by his ZANU-PF party, was working to impeach him — the Zimbabwean Spring took to the streets.

"I never thought I would see this day," tweeted the commentator and newspaper owner Trevor Ncube. "Mugabe has resigned in my lifetime. This is a stepping stone towards a Zimbabwe we want. It won't be easy."

For the second time in 48 hours, people of all skin colors, generations and political camps are hugging in the streets. Zimbabwe is experiencing a very special African Spring. After 37 years, the Mugabe era is history. The leaden times that started with the first falsified election in 2002 and dragged on with no apparent end in sight are finally over. The entire country, across the whole political spectrum, feels as if a dam has burst. There is a sense of infinite relief.

So now the work begins — and perhaps the hangover, too. The new strongman, Emmerson Mnangagwa, a freedom fighter and long-term loyalist of Mugabe's, with whom he once shared a cell, has displayed a keen instinct for assessing the political mood and using it. He is now feverishly holding talks with a host of Mugabe's enemies — those he alienated, fired and humiliated — to try and form alliances. It has to look harmonious, constitutional; it must represent the interests of the state and be in the service of the people. He must succeed in sending out signals of reconciliation. He is even said to have already spoken to dispossessed white farmers.

Mnangagwa must be calculating on leading the governing party ZANU-PF to election victory in 2018, from a position of power and with the support of the military. The chances are good, because the opposition is divided as never before. Egotism and intransigence have caused the once-strong Movement for Democratic Change (MDC), which even won the election in 2008, to splinter into numerous smaller groups.

The man of tomorrow?

Ten years on, this curious coup could be followed by a legitimate victory for ZANU-PF. The quiet Mnangawa, nicknamed "The Crocodile," is a man of the past: a guerrilla fighter, Marxist and secret serviceman. He heads a junta-like military circle that urged Mugabe, even before he lost the election in 2008, to cling to power by any means. This is the same clique that, with the help of elite North Korean soldiers, organized the massacre of up to 20,000 recalcitrant Ndebele in the early 1980s. This mass murder has still not been addressed, even though many Zimbabweans are prepared to forgive.

Mnangagwa may therefore be the man of the hour, but he is not the man of tomorrow. That's why it was all the more important that the hundreds of thousands of Zimbabweans who took to the streets at the weekend refused to be instrumentalized as a march for ZANU-PF. They showed how many different voices there are in the country — and what potential there is in this unity. This is exactly what must be reflected in the next election: It must be free, fair and democratic, and must represent all of Zimbabwe's many voices.

Zimbabweans have lost their fear. But the man of the hour, Emmerson Mnangagwa, should fear this revolutionary momentum, because the tide could soon turn against him.

President Robert Mugabe hasn't always been popular with German politicians — but that doesn't mean they're overjoyed that he has been deposed. German leaders hope any changes in Zimbabwe will be democratic. (16.11.2017)