Europe needs a "radical" shutdown, including industry and schools, to bring coronavirus infections down to zero, say petitioners in Germany and Austria. 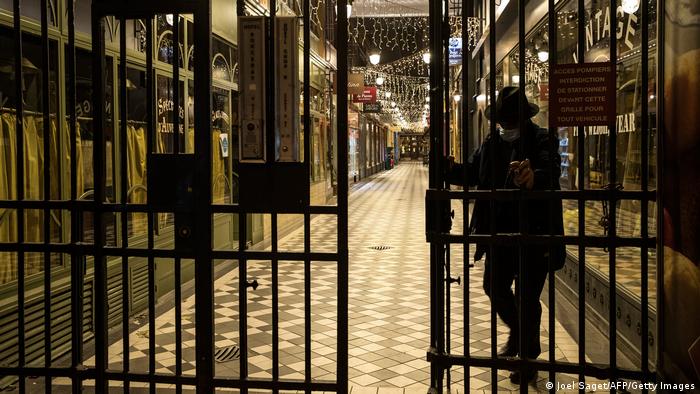 The petiitioners are calling for a Europe-wide hard lockdown

A petition to impose a hard lockdown across Europe gained rapid momentum on Thursday.

The "ZeroCovid" petition, launched in Berlin and Vienna before dawn, had drawn 17,000 signatures by late Thursday as campaigners declared Europe's one year of patchy efforts since the pandemic's outbreak as "failed."

"Thousands of people die every day, even more get infected," wrote campaigners, who said Europe's "enormous wealth" held by a "few individuals" should assist people on low incomes via a "covid-solidarity fee on high estates."

Instead of trying to "flatten the curve" depicted in infection statistics, the "radical" goal of reaching zero required a "proper shutdown of the economy," they said, urging all European nations to "act swiftly and at the same time."

"Shutdown means: we reduce our direct contacts to a minimum — also at our places of work", said petitioners, adding: "schools must be closed," with tuition online and labor unions focused on solidarity during the "short" pause.

Protecting health and democratic rights was "no contradiction," they insisted, saying once case numbers were low, local outbreaks must be contained "energetically."

The petitioners, including medics, intellectuals and activists prominent on other issues such as climate change and refugees, cited the End Coronavirus campaign begun in Britain early last year and a call made by European scientists via the Lancet magazine in mid-December.

Those scientists' message was: "break" the wave through stringent restrictions, avoiding a third wave through "testing, contact tracing, isolation," coupled with vaccinations.

Likewise, "ZeroCovid" campaigners said wages needed to be raised for health and care work, asserting that "profit-oriented" clinics endangered common health and urging that vaccine production shift into the public realm as "a global common."

Among the Berlin-based first signatories, philosopher and author Bini Adamczak told the leftist newspaper TAZ: "We have to get away from the lurching course in which governments always react to predictable things — only after the fact."

"The measures that are then adopted restrict life just as severely, but then have to remain in place longer in order to have an effect," she said.

TAZ readers' reactions ranged Thursday from "we should have throttled the first wave [in March, April] even longer" through to an incredulous rejection of campaign-sought expropriations "and whatever else stands on the list."

Amid 93 million cases of infection worldwide and nearly 2 million deaths over the past year, Australia's toll stood at 909 deaths and New Zealand's at 25 deaths in total, according the Johns Hopkins registry in the United States.

Coronavirus: WHO team arrives in Wuhan to probe virus origin

The WHO has sent a team of experts to Wuhan, ground zero of the COVID-19 pandemic, to probe the origins of the coronavirus. The visit comes as China reports its first death in eight months.

Rohit Sharma, Rishabh Pant, Shubman Gill, Prithvi Shaw and Navdeep Saini were spotted inside a restaurant in Melbourne by a fan. Australia has only allowed Indian cricketers to dine outdoors.