You've Got Mail (From the Pope)

Germans who can't attend the pope's final mass of the World Youth Day celebrations on Sunday need not despair. A mobile service will relay the papal message to their cell phones. 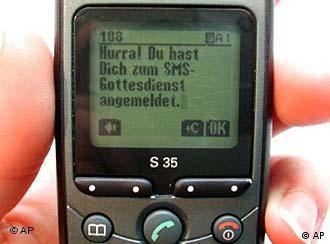 When Pope Benedict XVI delivers his final mass on Sunday to end the World Youth Day celebrations, it'll be a difficult feat for any of the 800,000 strong crowd of pilgrims expected to get anywhere close to the pontiff. Instead he will come to every single one of them -- provided they have signed up for a text messaging service organized by the German Bishop's Conference and TV broadcaster RTL.

For those who have subscribed, every evening over the past week has seen a short but significant quote taken from a statement made by the pope on that day arrive on their cell phones, said Dietmar Heeg, a Catholic Priest who is in charge of organizing the service on behalf of Germany's Catholic Bishops.

"In this way the core theological statements of the German pope have been spread widely and quickly," he added. To subscribe, the believers only had to send an initial message to a service number to receive the quotes. 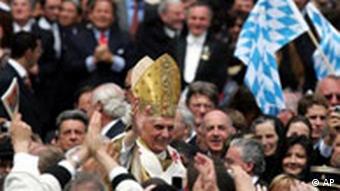 Heeg, who works with a Catholic TV Production company in the city of Frankfurt am Main, has been responsible for selecting the quotes which have been sent via the mobile networks. "In the run-up to the pope's visit, we started the service by sending out statements Benedict XVI. made in connection with World Youth Day," explained Heeg.

160 characters for the Pope's message

To condense the papal utterances into 160 characters of a text message is certainly no mean feat, but the priest is no newcomer to the field of mobile spiritual guidance -- and the limitations that come with it.

At the Frankfurt based company he already runs another service. The "SMS-Abendgebet" relays the "text message evening prayer" penned by a number of preachers on two of the country's major TV networks -- to the cell phones of the believers.

The service does come at a price -- around ten eurocents for the evening prayer and 0.29 for the new daily text message from the pope. But Heeg insists neither the production company nor the church is making any profit, the fees just about cover the costs of relaying the texts.

While Heeg's company is fully responsible for the evening prayer service, the higher price for the pontiff's quotes comes about because in this case broadcaster RTL covers the technical side of the service and offers it as part of their premium rate text messaging. Any surplus would therefore end up in their coffers.

Starting a week prior to WYD Germans were able to register for the mobile messages from the pope. "This is the first time we offer a service of this kind together with the Catholic Church,"said Simone Danner of broadcaster RTL, who declined to comment on the number of subscriptions received for the week-long event.

Although text messages can be sent out to up to 1,000 people at the same time, she admits the service is "not a mass product" as it is aimed at "a specific group of people" and not likely to be as popular as their weather and news mobile services.

Dossier: The 2005 World Youth Day in Cologne, Germany, is an event of superlatives. With some 800,000 youths from more than 190 countries descending on the Rhine region for a week of prayer and religious festivities, the cities of Cologne, Bonn and Düsseldorf will be hard at work showing they are the perfect hosts. (Aug. 10, 2005)

The world's largest gathering of Catholic youth -- World Youth Day -- is taking place in Cologne, Germany in August 2005. Various projects and events are planned in the run-up to the festival celebrations. (July 25, 2005)