Hillary Clinton has the backing of many Democrats, but young voters are flocking to her socialist rival, Bernie Sanders. His call for a "political revolution" has struck a chord with America's millennial generation. 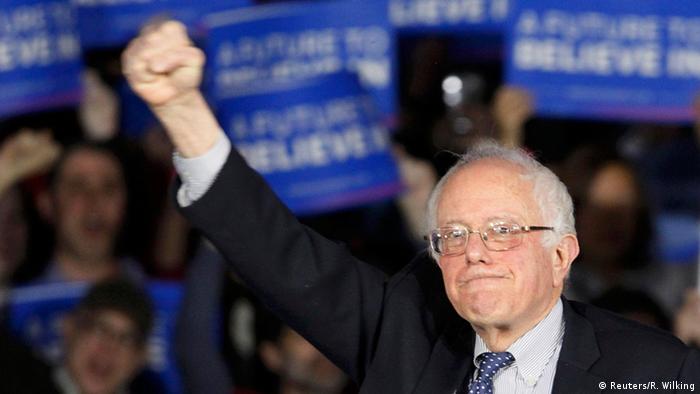 Two weeks later, her father was laid off from his job working construction in the Chicago suburbs. Soon the bank came and foreclosed on the family's home.

Rubio was 15 when tragedy struck her family. She was angry, but still too young to place what happened in a broader social context. During college at DePaul University, Rubio became politically active in progressive student organizations.

"We bailed out the big banks," Rubio told DW, "but we didn't bail out the people who were taken advantage of."

After graduating with $60,000 in student debt, she joined the campaign of Will Guzzardi, a progressive state representative in Illinois. At 25, Rubio is now his political director.

From Guzzardi's headquarters, she's helping to organize grassroots support in Chicago for Bernie Sanders, the socialist presidential candidate who nearly beat establishment favorite Hillary Clinton in Iowa. Sanders is calling for a "political revolution" against the "billionaire class."

"It's about eradicating corporate power, which has a lot to do with what we see happening in our communities," Rubio said.

'The youth are getting a later start'

Six new volunteers show up to a phone bank organized by Rubio in Chicago's Logan Square neighborhood. They either work the phones trying to convince voters to support Sanders over Clinton, or they help out with data entry.

Almost all of them are under 30, and most have faced economic struggles since college. Jorie Moore is a 28-year-old preschool teacher. Between her student debt and her house bills, she can't afford her $450 (403 euro) health insurance premium. 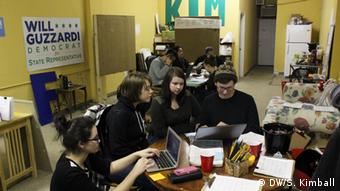 Jamie Corliss, 23, graduated from Columbia College with a major in cultural studies. She's currently unemployed with $22,000 in debt.

"Because I'm unemployed, I can't start paying it back," Corliss said. "It's accruing by the day."

Her story is not unusual. The US unemployment rate has dipped below 6 percent, but millennials make up 40 percent of those who remain jobless, according to an analysis by MarketWatch.

And more than 40 percent of recent college graduates are underemployed, which means they work jobs that don't require their expensive degrees.

In 2014, two-thirds of college graduates were burdened with an average debt of $30,000, according to the Institute for College Access and Success.

Kristen DeRosier, 27, had to live with her parents for three years to pay down $40,000 in student loans before moving out. She's now an export sales associate.

"The youth are getting a later start," Kristen said. "It's hard to get out on your own."

Under-30 vote key in Iowa

Jacob McDermott, 28, got a late start. When he decided to major in civil engineering at the University of Wisconsin Madison, a job after college was virtually guaranteed.

Then the financial crisis hit and the job market bottomed out. McDermott had to work odd jobs in a kitchen and as a shuttle bus driver at a hotel. It took him three years to find a civil engineering job.

"I feel like my career was put on hold as a direct result of the housing crisis," McDermott said. "Everybody was buckling down or laying people off - it was a difficult job market."

Sanders has struck a chord with McDermott, who also has student debt. The promise of tuition-free public universities and replacing private health insurance with a public system resonates with many millennials who have experienced difficult times. 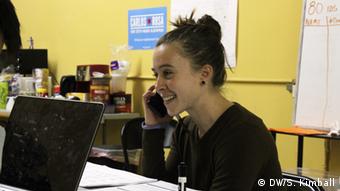 McDermott made the trip from Chicago to Iowa to campaign for Sanders. Though Clinton won the first contest of the Democratic primaries, the margin was razor thin. She carried Iowa by three-tenths of one percent, a far cry from the 40 percent lead she held in June.

At 74, Sanders would be the oldest president inaugurated in American history. Yet the Vermont senator swept 84 percent of Democratic voters under the age of 30 in last week's contest in Iowa.

"There's no question - if Sanders hadn't gotten a good sized turnout and support from under-30 voters in Iowa, this race would be over in my opinion," Zachary Cook, a professor at DePaul University who researches millennial voters, told DW.

Clinton was more popular with older voters in Iowa, though by smaller margins. Fifty-eight percent of voters between the ages of 45 and 64 supported the former secretary of state, according to the Des Moines Register. Sixty-nine percent of voters over the age of 65 backed her.

"Sanders has to do well and better amongst voters over the age of 30 in other states in other upcoming contests if he has a shot at beating Hillary," Cook said.

As the party now turns to the primary in New Hampshire, the youth vote could have a significant impact on the outcome. There are 129,000 eligible voters in the state who were too young to vote in the 2008 primary, according to a recent University of New Hampshire study.

"Right now, the age split within the Democratic cohort is real," Cook said. "The question is: After this primary, whoever wins, will they all come back together again?"

For her part, Rubio views Clinton as a "corporate Democrat." According to the Washington Post, the financial services industry has provided $21.4 million to Clinton's campaign, while Sanders has received $75,000 from the finance sector.

Rubio said she'll vote for Clinton over any of the Republicans, but she's not enthusiastic about the prospect: "I wouldn't do as much work on the ground," she said.

US Republican presidential hopefuls met in the state of New Hampshire on Saturday for the final debate before the primary. Senator Rubio drew several attacks from other candidates who alleged that he was inexperienced. (07.02.2016)

Tensions between the United States and Russia on nuclear arms control are a sign of a strategic transition, which also opens up opportunities. DW spoke with Rafael Grossi, head of the International Atomic Energy Agency.

Protests turned violent after the introduction of new restrictions, with second-wave lockdowns being implemented across Europe. Meanwhile, both Germany and the Indian capital New Delhi reported a daily record for cases.

The women were subjected to invasive examinations in the hunt for an abandoned baby's mother earlier this month. Qatar "regrets" harming personal freedoms but has not yet explained why officials conducted the searches.