Rioters have set fire to 30 cars and torched a school and a nursery in poor immigrant suburbs of Stockholm. Three nights of unrest in one of Europe's richest capitals has marred Sweden's reputation for social justice. 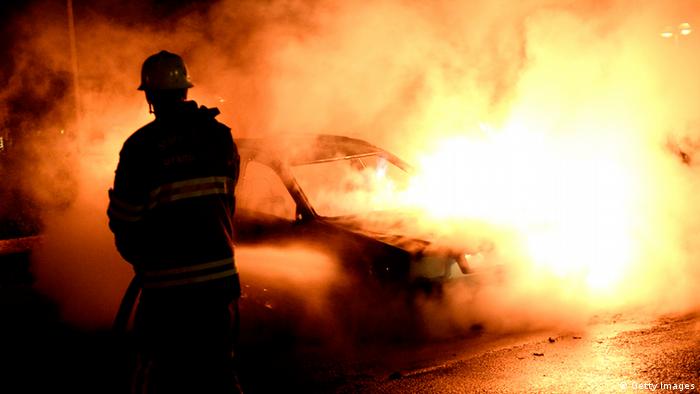 Swedish police said Wednesday they had arrested eight young men during a third night of urban unrest in low-income suburbs of Stockholm from Tuesday into Wednesday.

The rioting had erupted on Sunday after police shot dead a 69-year-old man on May 13.

Police said officers had acted in self-defense when the man wielded a machete in the northwestern suburb of Husby. The shooting was being investigated by a special police unit.

A group Megafonen which works with youth in deprived areas, accused police of being heavy-handed and targeting immigrants indiscriminately. Cuts in services and closures of youth centers have fuelled discontent, said its spokesman Rami al-Khamisi.

Prime Minister Fredrik Reinfeldt, who heads a center-right government, told the news agency TT that "burning your neighbor's car is not an example of freedom of speech, it's hooliganism." He appealed to "everyone" to take responsibility for restoring calm.

Stockholm police spokesman Kjell Lindgren said "around 30" cars had been set ablaze in the greater Stockholm area as rioting spread to southern Stockholm.

A school and a nursery had been torched and rocks thrown at police and firefighters.

On Tuesday, Reinfeldt referred to heated Swedish debate on immigration by attributing the outburst to failed integration.

"Sweden is a country that receives large groups from other countries. I'm proud of that," he said, adding that the government had sought to improve Swedish language education.

The anti-immigrant Sweden Democrats party, which has risen to third in surveys ahead of a general election due next year, said the Stockholm riots were the result of an "irresponsible" immigration policy.

"Never before has so much money been spent on immigrant-heavy suburbs as today," party leader Jimmie Aakesson told the daily newspaper Svenska Dagbladet.

Anna-Margrethe Livh of the opposition Left Party wrote in the Svenska Dagbladet: "We have failed to give many of the people in the suburbs a hope for the future,"

Reinfeldt's center-right government has over six years reduced social welfare benefits for which Sweden once had a world-wide reputation. As a result sharp inequalities have emerged, according to the Paris-based Organisation for Economic Cooperation and Development (OECD).

The left-leaning tabloid Aftonbladet said the riots represented a "gigantic failure" of government policies, which had underpinned the rise of ghettos in the suburbs.

Some 15 percent of Sweden's population is foreign-born, the highest proportion in the Nordic region. Unemployment among those born outside Sweden stands at 16 percent, compared with 6 percent for native Swedes, according to OECD data.

OECD figures also show that Reinfeldt's reforms, as well as earlier changes, some under the Social Democrats, introduced since a 1990s crisis, have given Sweden the steepest increase in inequality over 15 years amongst the 34 members of the organization.

Sweden has come out on top in the 2013 Ice Hockey World Championship, with a crushing win over wildcard finalist Switzerland. (19.05.2013)