Youth for Peace: Inspiring ideas for 'old men with ties' 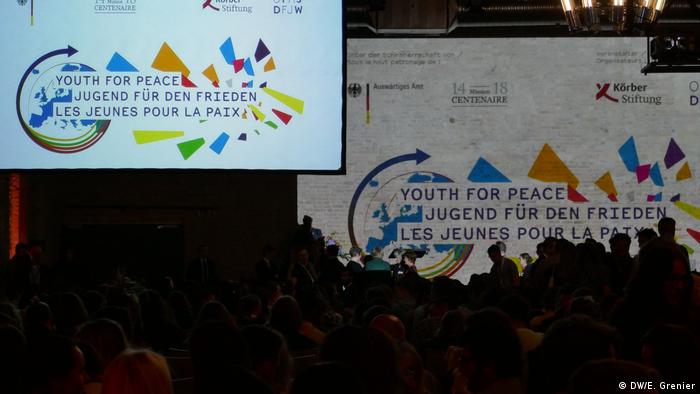 Five hundred participants from 48 different countries are coming together in Berlin for the international youth meeting "Youth for Peace — 100 Years after World War I, 100 Ideas for Peace." During three days of workshops, they will develop different ideas for peace that will be handed out to German President Frank-Walter Steinmeier and French President Emmanuel Macron at the closing ceremony on November 18.

In his opening remarks at the youth meeting's kick-off event on Wednesday evening, Andreas Michaelis, State Secretary of Germany's Foreign Office, reminded that 1918 was not only the year World War I ended, but one of international transformations. Borders were redrawn, new nations were proclaimed and women in Germany obtained the right to vote, for example.

"Today we are once again living in a period of upheaval," said Michaelis, and added the main question we need to answer now is: "Where are we headed?" "That's where you come into play," the state secretary told the young participants. "The future should not be determined by old men with too long ties," quipped the politician who was wearing a long tie himself. 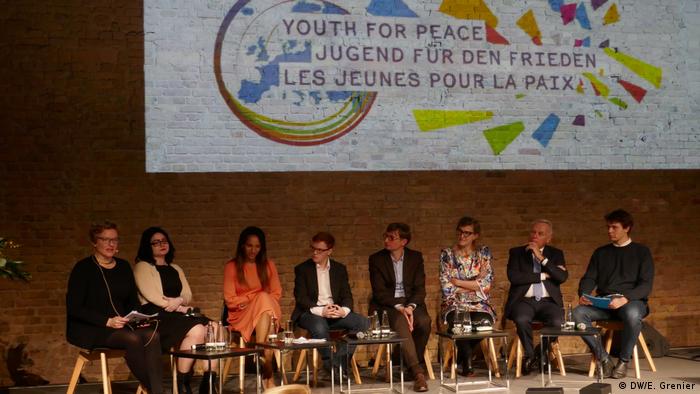 Franco-German reconciliation as an inspiration

Organized by the Franco-German Youth Organization (FGYO) in cooperation with the Körber foundation, the project is based on the idea that the Franco-German reconciliation can serve as an inspiration to the participants from various countries across the European continent as well as neighboring southern and eastern states.

The former enemy countries developed the idea of the European Union as a project of peace. "This heritage is, however, fragile," said former French Prime Minister Jean-Marc Ayrault.

With the current strong ties between France's President Emmanuel Macron and Germany's Chancellor Angela Merkel, the fact that both of them commemorated together on November 11 might seem like a given, but it was actually the first time two French and German leaders underlined the end of the war together, pointed out French ambassador Anne-Marie Descôtes. 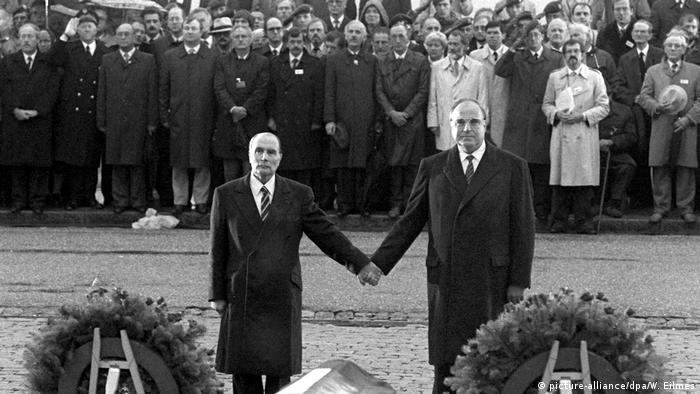 In a similarly strong symbolic act, German Chancellor Helmut commemorated with French President François Mitterrand in Verdun on September 25, 1984, 70 years after the start of the First World War

Ayrault stressed the importance of such symbols to commemorate history, since all people who were involved in the conflict are now dead. "Symbolic acts are strong acts, we do not need to be afraid of them — but we shouldn't just settle for them either."

More concretely, the young high school and university students of the Youth for Peace meeting will be participating in various workshops with topics ranging from how WWI was covered by the media in different countries to war-related migration, or from a peace talk with activists from the International Campaign to Abolish Nuclear Weapons, which was the winner of the 2017 Nobel Peace Prize, to a civil disobedience class with the Peng Collective.

Most importantly, beyond the insight the participants will get through the program, they will also meet people from different countries and perhaps create lasting international friendships. "The presence of so many people here is proof that we all agree that war has no purpose," said the 17-year-old Youth for Peace participant Julius Niewisch.

Such a meeting might allow young people to "gain perspective on how we can create a common history," said Latvian law student Anete Kalnina during the panel discussion.

The German historian Sönke Neitzel however pointed out that this goal could be difficult to reach. The opposing national narratives of each country "make sense to the people who exploit them," he said, whether it's a pro-Brexit politician or the Polish conservative government, for example.

"What we can achieve, however, is a better understanding of the different perspectives and narratives," Neitzel added. That would make it easier for people to accept differences instead of seeing them as a threat. 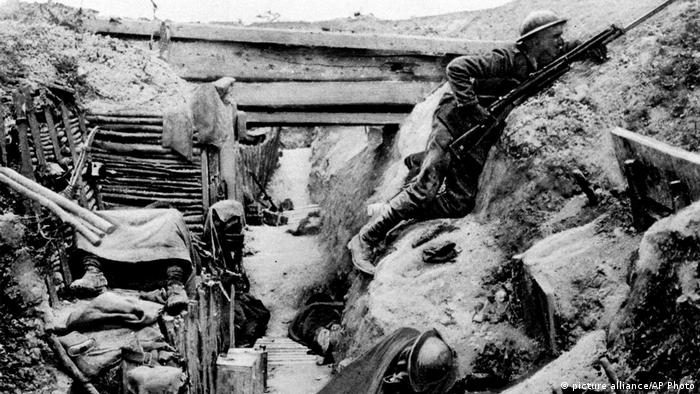 Winners, losers and long-lasting consequences: Each country has developed its own narrative of the war

In her keynote, British author Afua Hirsch used personal stories and historical facts to provide a sense of the current leading narrative in her home country. Her paternal grandfather was German — a decorated WWI soldier who had to flee Berlin in 1938 since he was Jewish.

While Germany has since focused its national narrative on its sense of guilt following World War II and the Holocaust, the Brits "are obsessed with glory," through their depictions of the same conflict, she said. However, "our sense of glory risks undoing what we fought for," she added.

As a Black female with Jewish-German-Ghanaian roots, her strong views, which she makes public through different media platforms, are often received with racist reactions of the type, "then why don't you go back to your own country…" These comments have become even more blatant after the Brexit vote, especially via the author's Twitter account.

The Bosnian filmmaker Jasmila Zbanic said that her role as an artist was to challenge these official narratives. Pointing out that nowadays no one could technically "remember" the First World War from having experienced it directly, some Europeans however still have a recent experience of conflict. As a 17-year-old, Zbanic witnessed how quickly a conflict could escalate as her own country slipped into war in the 1990s.

She feels more human stories need to be heard, and particularly those of women. Through war, family members were killed; women were massively raped.

No matter from which country these stories come from, there's "no more national glory left" when you hear them, said the filmmaker whose Golden Bear-winning debut feature, Grbavica (2006), was about the systematic rapes of women during the Bosnian war. 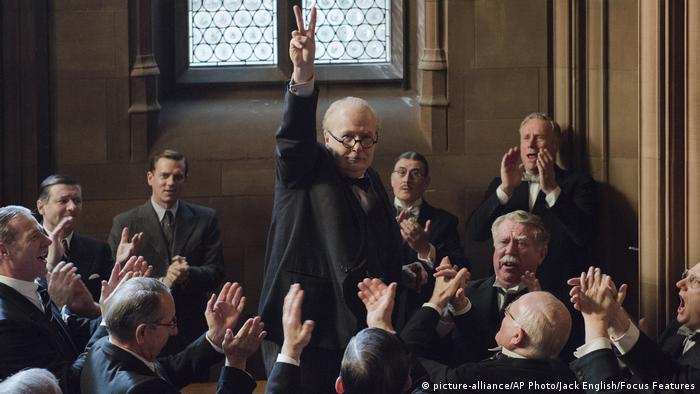 A demonstration of the Brits' obsession with their own glory, according to Hirsch: A scene from "The Darkest Hour"

Afua Hirsch quoted another example of a movie glorifying the British The Darkest Hour, which is an account of the early days of Winston Churchill as Prime Minister during World War II.  It shows Britain as a small and isolated island taking on Hitler, but it dismisses the fact that the UK at the time was an incredible imperial power with international resources and manpower at its disposal worldwide.

"What I worry about is that the way we commemorate is making us stupid," she said, referring to this film and the different glorifying depictions of Churchill and the war. "When we reinforce these narratives that are based on half-truths, or very selective history, it actually encourages us to forget the things we should be remembering."

"Our role, and it's something everyone can do, is to challenge the narratives that are presented to us as facts when they are not facts," Hirsch also pleaded.  "If people did that, then things would genuinely change."

'Aftermath: Art in the Wake of World War One' reveals deep scars a century on

Marking 100 years since the end of World War I, a new exhibition at London's Tate Britain explores how artists across Europe responded to the physical and psychological horrors of the "war to end all wars." (05.06.2018)