Violence and a lack of prospects are driving many Afghans to leave their homes and come to Europe. Many of the asylum seekers are under age and their trips here are often long and perilous. 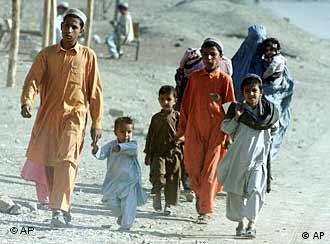 The German language is not easy for Omar. He has been living in a youth center in northern Germany for around two months now. He has his own room. It is a simple room with posters of famous singers on the walls. Omar, whose real name is not being used, appears to be a normal 17-year-old. But his trip to Germany was a long and dangerous one.

"We were at sea for 28 hours until we reached Greece," Omar explains in his mother tongue Dari. "There were 25 of us on a plastic boat that was tied to a tugboat." He explains that the rope had to be cut at one point due to extreme weather conditions. "Our boat rocked and just floated around on the water." 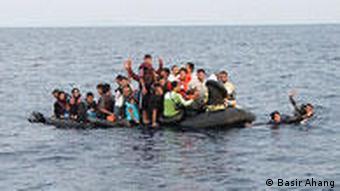 The journey to Europe can be very dangerous

Four years ago Omar lived in a village in northern Afghanistan. He decided to leave the village and join one of his relatives in Germany. Talking about his trip brings up painful memories. "Our boat didn't sink. But we almost died anyway. Water kept getting in the boat and we had a lot of effort getting it out. We had to drink water from the sea." Omar was one of the lucky ones who survived.

Thousands of Afghans embark on the long and often dangerous trip to Europe every year. Many of them are children and teenagers. Each and every one of them has their own reasons for setting out in search of a new future abroad.

Ali, who wished not to mention his real name, also had reasons for leaving his country for Germany 17 years ago. He emotionally retells his story: After the death of his grandfather, there was a family dispute over inheritance of his land. Ali's father was badly injured in the dispute. "I lost my brother and my cousin in the inheritance fight. They died. My father's relatives were rich and powerful. We were no longer welcome there."

Fearing further casualties, Ali's family sent him and a cousin away from Afghanistan. They set off to meet up with another cousin in Denmark. The first few nights were spent in Iran with an uncle who hired a smuggler for the boys. 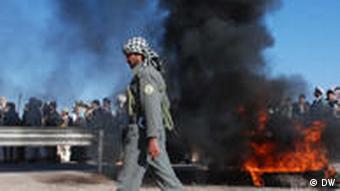 Many Afghans are plagued by violence and poverty

Omar left his village because of deadly conflicts between his and a neighboring village. He also crossed through Iran, where he briefly found work at a construction site. He sent money to his family, who had gone with him to Pakistan and ended up staying there. Omar stayed in Iran for 18 months before continuing his journey to Europe. His next stop was Istanbul, Turkey. With the help of a smuggler, he then made it to Greece.

"I was in Athens for a month. Some nights I had to sleep in dumpsters," he recalls. He says he saw many Afghans there - around five to six thousand, all of whom were poor and miserable. "Most Afghans in Greece are homeless. Many of them end up penniless after being scammed by smugglers."

"The situation is especially extreme for under age refugees in Greece," explains Bernd Mesovic from the rights organization Pro Asyl. He says kids are often incarcerated with adults in tiny cells in which there is hardly any room to move.

Omar did not go to jail while in Athens. He didn't stay there very long before continuing on his way to Germany. Ali also had luck finding a smuggler relatively quickly. He caught a ride from Athens to Italy in a refrigerator truck. "Around 20 people were hiding on that truck. We were in there for two days and two nights. It was very rough."

"We were very close to death by the time we got to Italy. Had they opened up the door just five or ten minutes later than they did, we would have all died. There was hardly any oxygen in there."

Ali finally arrived in Germany after a few short stops in Italy and France. A few weeks after Ali reached his destination, Omar also reached his. Both boys ended up in the same youth center and moved into rooms next to each other. Youth can stay in so-called "clearing houses" for a few months. At the moment, there are 11 under aged asylum seekers who are unaccompanied by adults. A staff of five people work there in rotating shifts. The children receive German classes and participate in sport activities. They have contact to lawyers who handle their asylum applications. Ali and Omar like their new home. 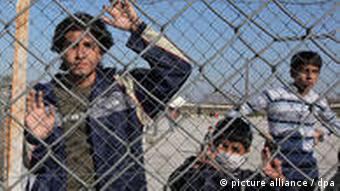 Many Afghan asylum seekers live in poverty in Greece

But is not the case for all such houses in Germany. In Bavaria, 60 young Afghans recently went on a hunger strike to demonstrate against their unsanitary accommodation in military barracks. They also spoke out against not having enough German lessons. Their applications for asylum, apparently, had not been taken seriously. The Bavarian provincial government has promised to improve the children's conditions.

Ali's and Omar's hopes for the future are beginning to take shape. "I want to be an excellent photographer," says Omar, adding: "I also want to lead a happy life with my family." Ali has humble hopes. "I want to lead a quiet lilfe here and go to school. That is all I want."

A German court will soon decide whether or not the boys will be granted asylum. Until then, they will have to wait to see what becomes of their hopes and dreams.

The European Court of Justice has warned Britain and Ireland against shipping asylum seekers back to squalid Greek refugee camps, overruling the EU's standing migration procedure. (21.12.2011)

Created in 2010, a European Union agency for asylum policy is slowly starting to do some good where help is most needed: in Europe's brimming refugee camps. But the problems are far from resolved. (15.12.2011)

New hope for refugees in Thailand

This week, 90 Ahmadi Muslim refugees from Pakistan were released from an immigration detention center in Bangkok. The event marked a new program of cooperation allowing the legal processing of refugees without detention. (09.06.2011)