Yemen risks an imminent collapse of its health care system, according to the WHO. The UN health agency has estimated the latest death toll from fighting in Yemen at 944. 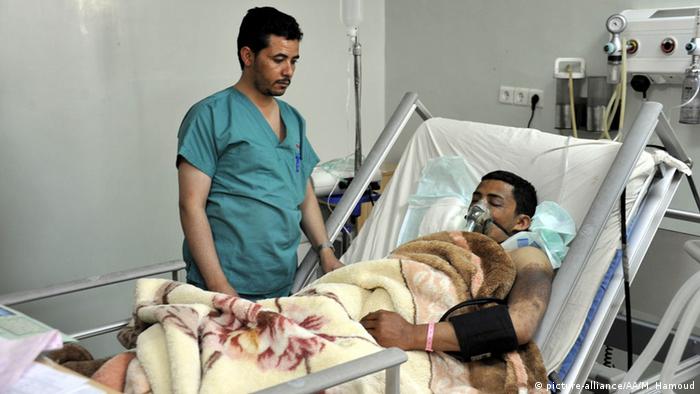 Yemen's health services were on the brink of collapse with life-saving medicines and key medical supplies running out, the World Health Organization (WHO) warned on Tuesday. "Power cuts and fuel shortages also threaten to disrupt the vaccine cold chain, leaving millions of children below the age of five unvaccinated," the WHO declared in a statement.

"This increases the risk of communicable diseases such as measles, which is prevalent in Yemen, as well as polio, which has been eliminated but is now at risk of reappearing," the statement added.

According to the WHO, the number of patients able to access health facilities had decreased dramatically since the escalation of hostilities in Yemen. "The major hospitals will soon be completely unable to provide humanitarian and emergency services or to perform operations and provide intensive care to needy patients," the WHO quoted the country's health ministry as saying, adding that there was a lack of medicines for kidney dialysis, cardiac and cancer treatment.

The impoverished country on the Arab peninsula was plunged into chaos last year when the Shiite Houthi rebels seized the capital, Sanaa.

The United States announced that it was sending two warships to waters off Yemen. The New York Times quoted US government officials as saying that the move was a warning to Iran as well as a signal of support to Saudi Arabia.

An airstrike on a missile base in Yemen's capital has killed dozens of people and wounded hundreds, according to medics and Houthi rebels. The Saudi-led strike sparked powerful explosions and flattened houses. (20.04.2015)

Yemen's Houthi leader vows to never give in to Saudi 'aggression'

The leader of Yemen's Houthi militia has accused Saudi Arabia of plotting an invasion. The UN says thousands of people have been displaced since a Saudi-led campaign launched strikes against the rebels three weeks ago. (19.04.2015)

Iran has presented a plan to the UN in a bid to end the conflict in Yemen. The proposal calls for international action to put an end to the Saudi-led airstrikes against Houthi rebels believed to be backed by Tehran. (18.04.2015)