Shiite rebels and their allies have seized the presidential palace in Aden. The capture followed heavy clashes in the commercial center of the southern Yemen coastal city. Unidentified troops have also reportedly landed. 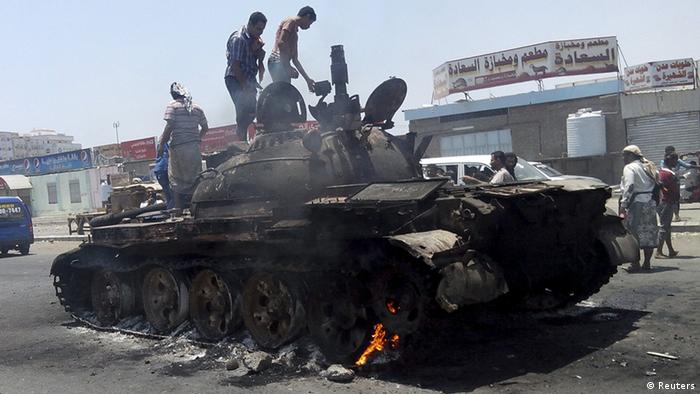 According to medics and a military official in Aden, at least 44 people were killed in the fighting between rebels and supporters of Yemeni President Abed Rabbo Mansour Hadi on Thursday.

Eighteen civilians and six members of a local militia resisting the rebels' advance died in the clashes. A military official said 20 Houthi Shiites were also killed.

"Dozens of Houthi militia and their allies arrived in armored troop carriers and entered Al-Maashiq presidential palace," said the official, who witnessed their advance into the complex. The palace was President Abed Rabbo Mansour Hadi's last seat of power before he fled to Saudi Arabia last month as the rebels advanced on Aden.

Yemeni security officials said Thursday's capture came despite week-long airstrikes in Yemen by a Saudi-led coalition trying to halt the advance of the Houthi rebels.

Aden residents also said the rebels, who are widely understood to be backed by Shiite Iran, pushed deeper into the city's central districts of Khor Maksr and Crater, defying the coalition bombing.

A bomb blast at a dairy factory on Wednesday in the Red Sea port city of Hodeida killed at least 35 workers. It was not immediately clear whether the airstrike was a result of the coalition bombing or an attack by rebel forces.

The violence on Thursday came amid reports of unidentified troops landing from the sea.

An official at Aden harbor, however, denied reports that foreign troops had landed at the southern port. The official told the German Press Agency that a Chinese warship had arrived at the port to evacuate Arab and foreign nationals who are currently stranded there.

Al Qaeda militants in Yemen have stormed a jail and freed hundreds of prisoners including a prominent terrorist leader. In another side of the complex conflict, Saudi-led troops beat back Houthi rebels in Aden. (02.04.2015)

A panel commissioned by the UN has found that the number of would-be militants and their countries of origin have increased dramatically. The report calls Syria and Iraq "finishing school" for foreign extremists. (02.04.2015)