A bomb blast at a dairy in Yemen has killed at least 35 people. It was not immediately clear if an airstrike from the Saudi-led coalition or rebel forces caused the blast. 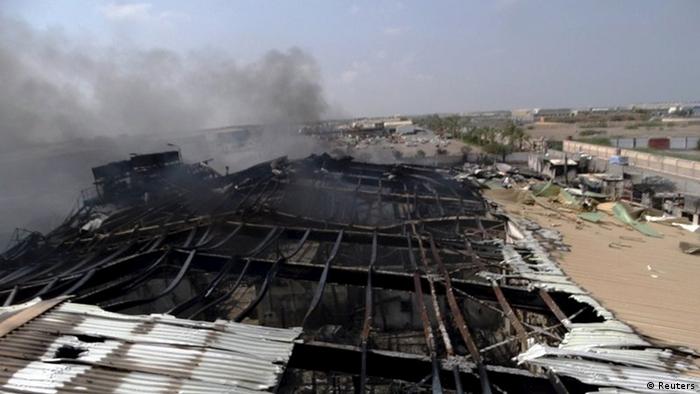 The bombing at a factory producing dairy products on Wednesday occurred in the Red Sea port city of Hodeida and hit some of the warehouse buildings. At least 35 workers were killed, according to medical officials, with many deaths caused when workers were crushed by the rubble or were burned to death.

The cause of the explosion could not immediately be confirmed, meaning it is unclear if an airstrike from a coalition led by Saudi Arabia who are trying to defeat Shiite Houthi rebels in Yemen were responsible for the blast, or if it was caused by rebel forces.

Airstrikes from coalition forces, which are fighting to keep Yemeni President Abed Rabbo Mansour Hadi from being overthrown by the rebels, hit other targets on Wednesday as well. The Houthis are allied with former president Ali Abdullah Saleh, forced out as part of the Yemen's 2011 Arab spring uprising.

Ground troops on the way?

In an interview with the AFP news agency, Yemen's foreign minister called on the Suadi coalition to increase its participation in the fight against the Houthis.

"I'm calling for [ground forces] because I think at some stage airstrikes will be ineffective," AFP quoted Riyadh Yassin as saying on Wednesday. "I am suggesting to start as soon as possible."

On Tuesday, the military leader of the coalition Ahmed Assiri said that there was currently no cause for a "land intervention," but added that this could change at any time.

International aid organizations have expressed concern about the civilian toll that has already occurred in the week-old conflict between the Houthi rebels and Yemeni forces. The International Committee of the Red Cross (ICRC) said Tuesday that a shipment of medical supplies was supposed to arrive Tuesday but had been prevented from doing so.