An airstrike in the northwest of Yemen has killed at least 40 people in a camp for displaced people, and injuring many more. A Saudi-led coalition has been pounding Shiite Houthi rebels positions for days. 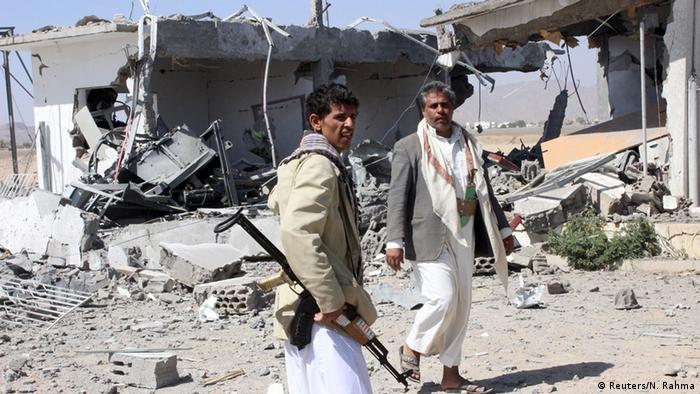 The UN said the strike hit the Al-Mazrak camp on Monday. A number of sources say at least 40 people were killed, and potentially hundreds wounded.

"There is confirmation that the camp (in Hajja province) has been hit ... We know there are dead and wounded," said the UN Office for the Coordination of Humanitarian Affairs.

The dead and injured were taken to a hospital nearby where the humanitarian organization Doctors Without Borders (MSF) operates.

"It was an air strike," said an MSF spokesperson, adding that it was likely that more were dead.

Since 2009, the camp has been housing Yemenis displaced in the conflict between northern Houthi rebels and the central government. The MSF said 500 families had arrived at the camp over the past two days.

It comes as a Saudi-led coalition continues a campaign of airstrikes against the Houthis in Yemen for a fifth day running. Many of the strikes are reported to have hit targets in and around the capital, Sanaa, which is under the control of Shiite Muslim Houthi rebels fighting to overthrow Yemen's internationally recognized president, Abed Rabbo Mansour Hadi.

Sunni Saudi Arabia and several regional allies, which launched the aerial campaign against the rebels last Thursday, have vowed to continue the airstrikes until the Houthis "withdraw and surrender their weapons."

Despite the air strikes against them, the Houthis appeared to be continuing to advance on the southern port of Aden, Yemen's economic center and the provisional capital declared by Hadi, before he fled the country last week.

The Houthis are allied with former president Ali Abdullah Saleh, forced out as part of the country's 2011 Arab spring uprising.