World's oldest champagne: to drink or not drink?

In Finnish Aland, bottles of the world's oldest drinkable champagne were found. It fetched a record price at auction. But according to a UNESCO convention, the bottles should never have been sold. 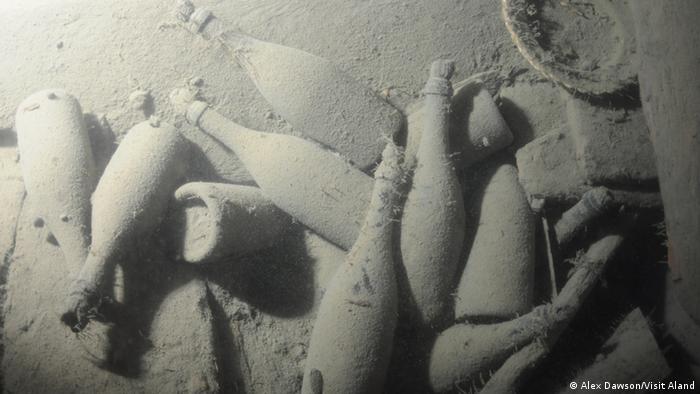 The bosses of the fine French sparkling wine house Veuve Clicquot thought Christian Ekström was a prankster when he first called them in 2010.

The professional diver and brewery owner discovered dozens of bottles of exclusive champagne at the bottom of the Baltic Sea in a schooner wreck, most likely sunk in 1840 close to Aland.

Now eight bottles of the select antique cargo are being auctioned in Mariehamn, the capital of the 6,700 autonomous Aland Islands which belong to Finland. 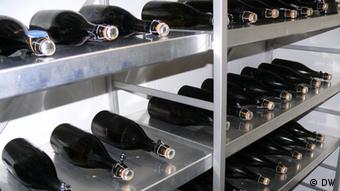 It was already the second attempt by Aland's government to sell a part of the 164 bottle haul. "We wanted to turn the eyes of the world on the archipelago," explained Johan Ehn, Aland's minister for culture and education.

It was a media coup for the small, autonomous region: "We used the champagne as a marketing tool."

Veuve Clicquot's chief historian, Fabienne Moreau, and Sweden's champagne "pope" Richard Juhlin confirmed the authenticity of the corks and the class of the content.

The conditions in which the bottles were situated, 45 meters (nearly 150 feet) deep in the sea under five bar pressure and at a temperature of five degrees Celsius (41 degrees Fahrenheit), were ideal for preserving the champagne.

Alongside the Veuve Clicquot treasures, a number of other Heidieck branded bottles and dozens from the sparkling wine house Juglar were also discovered in the wreck. They are not just a collection of rare drops, but also the oldest champagne ever discovered. 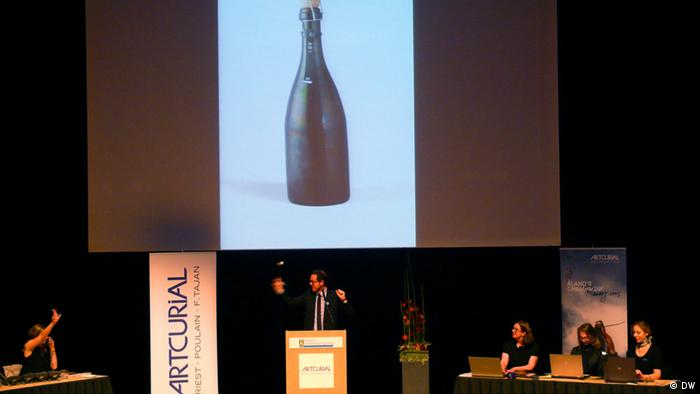 Some of the bottles already went up for auction

But then things changed. Eight of the precious rarities sold within the estimated price range of 10,000 to 15,000 euros. Three of the bottles were withdrawn by Åland's government because the bids were even lower.

The rest of the bottles waiting to be auctioned were taken to a secret location on Aland and stored in an underground bunker, complete with an alarm and heavyweight steel door.

There, in one of the refrigeration rooms, the precious haul is protected from climate fluctuations, bomb attacks and radioactive waves and can be kept for future auction.

But more significant than the auction is the dispute over the exclusive drinks: Should the bottles of champagne be auctioned at all? Are they not historical artifacts, just like the shipwreck and the plates, jars and nautical instruments found with them?

"Clearly yes! There is no doubt about that," said Kerstin Odendahl, a professor of international law at the University of Kiel and a specialist on the issue of the international protection of cultural objects.

"Evidently they are the oldest bottles of champagne in the world to have been found and which are still drinkable. They have a unique historical value. They lay underwater for over 100 years, and in this respect we have the UNESCO Convention on the Protection of Underwater Cultural Heritage from 2001," Odendahl said.

By the terms of the convention, the precious champagne is not permitted to be auctioned.

Jenny Lucenius, an archaeologist who works for Aland Museum, also agreed. "From an archaeological point of view, they are all artifacts which were found in the wreck, doubtless artifacts. Because of that the bottles of champagne can not be sold," she said. 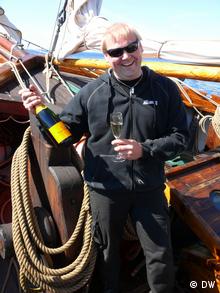 Christian Ekström, the diver who discovered the bottles, shared one with friends

But politicians have followed a different agenda and classified the champagne as a pure commodity and "drinkable foodstuff."

Aland's Culture Minister Johan Ehn sees things differently. "For us, the champagne is not a cultural object but a commodity like apples or pepper. And at some point it will evaporate. Think about the carbon dioxide," he explained.

But the commercialization of the antique drinks was also criticized and rejected at the UNESCO headquarters in Paris. Further still, according to the terms of the convention, the actions of Aland could be considered looting an archaeological site.

That is nonsense, said Ehn, who believes that Aland has not broken any international laws. Nevertheless, the government was not entirely behind the decision to sell the haul. The auction returns are to be directed to a foundation supporting archeological projects.

That Aland's government has not complied on a juristic level has to due to the fact that Finland has not yet signed up to the UNESCO Convention on the Protection of Underwater Cultural Heritage. Nevertheless, Ondendahl views Finland's non-compliance with the spirit of the convention "as at least a moral transgression."

Still, there is one winner in all this: Christian Ekström, the diver who discovered the champagne at the bottom of the ocean was not only the first, misjudging their worth, to have emptied one of the champagne bottles with friends aboard his diving vessel.

At the last auction he also seized the opportunity to secure one of the precious bottles for the minimum price of 10,000 euros for his local pub.

There are a few vineyards dotted around Berlin but real aficionados of Dionysus's favorite nectar stick to whites made in Germany's southern regions or reds from sunnier parts of the world. (13.04.2012)

New Year's concerts from the Vienna Philharmonic to KISS 30.12.2020

Partying at home on New Year's? Here's a list of livestream events that will bring pop, rock and classical music concerts straight to the living room.