The United States is one of almost 40 nations skipping UN talks to create a treaty banning nuclear weapons. Washington and a number of allies say provocations from countries like North Korea make a treaty unrealistic. 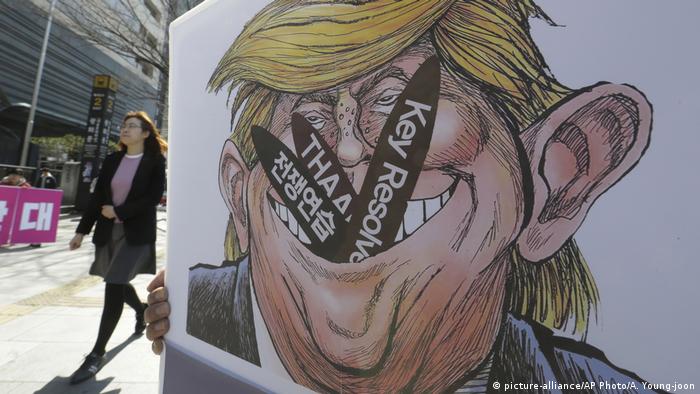 More than 100 countries on Monday launched the United Nations' first round of talks on an outright nuclear weapons ban. It would be considered a diplomatic milestone and among the greatest strides towards disarmament, if there weren't some notable absentees - namely the world's nuclear powers.

Last October, Britain, France, Israel, Russia and the US all voted against the UN's proposal to create a legally binding treaty banning nuclear weapons. The remaining nuclear powers - China, India and Pakistan - all abstained and also intend to boycott the talks. More than 30 other countries have announced plans to skip the negotiations, including Japan, the only country to have suffered a nuclear attack, in 1945.

The president-elect said that he did not mind an arms race because it would only benefit the United States. A spokesman explained that Trump intends to block other countries from boosting their own nuclear arsenals. (23.12.2016)

The Obama administration is reportedly mulling a change in its nuclear arms policy that would rule out using them first in a conflict. Such a move is not only unlikely - it would also be little more than symbolism. (15.08.2016)

Meanwhile, the countries leading the call for a prospective ban include Austria, Ireland, Mexico, Brazil, South Africa and Sweden. Hundreds of NGOs have also backed efforts towards a ban.

Those countries leading Monday's talks have cited the ever-growing threat of nuclear disaster - exemplified by mounting tensions over North Korea's nuclear program and an unpredictable new administration in Washington - as reason for agreeing a form of ban, even without the world's nuclear powers.

Margot Wallstrom, the Foreign Minister of Sweden, one of the countries leading the disarmament efforts, said the most important aspect of the talks was making progress on the nuclear issue. "I expect that this will take a long time, let's not be naive," she said at the UN last week. "But it's very important in these days when you see more of this rhetoric, and also sort of power demonstrations, including threatening to use nuclear weapons."

"Quite a high number of countries are actually interested in saying we have to break the deadlock that has been on this issue for so many years," she added.

The US ambassador to the UN, Nikki Haley, told reporters that the world's nuclear powers were skipping the negotiations so they could instead remain committed to the Non-Proliferation Treaty, an agreement signed in the 1970s that aims to prevent the spread of nuclear weapons.

"There is nothing I want more for my family than a world with no nuclear weapons," Haley told reporters. "But we have to be realistic. Is there anyone that believes that North Korea would agree to a ban on nuclear weapons?" 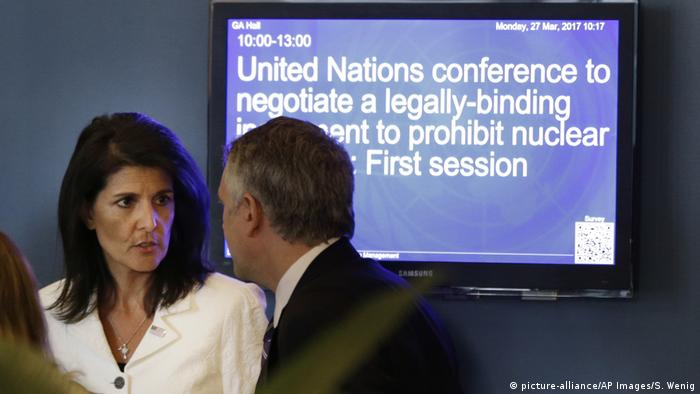 The US and her nuclear counterparts see little point of a treaty banning nuclear weapons.

Haley added: "In this day and time we can't honestly that say we can protect our people by allowing the bad actors to have them and those of us that are good, trying to keep peace and safety, not to have them."

Britain's ambassador to the UN, Matthew Rycroft, justified the UK's absence on the ground that it did not believe negotiations would progress towards global nuclear disarmament. His French counterpart, Alexis Lamek, said security conditions were not right for an outright ban.

The state of nuclear affairs

Even without the world's nuclear powers at the table, this week's talks could have an impact on the international communities' slow-moving nuclear disarmament process.

Beatrice Fihn, director of the International Campaign to Abolish Nuclear Weapons, an international coalition of NGOs, said there was a "good chance" of a treaty being adopted, even if not during the first phase of negotiations and not including the world's nuclear powers.

"Even if major (nuclear weapon) producers don't sign it, (treaties) have a big impact," Fihn said. "Look at Russia denying using cluster bombs in Syria. Why? They did not sign (the cluster munition ban), but they know it's bad."

Nevertheless, the rhetoric around nuclear weapons has escalated in recent years - from talk of disarmament to demonstrations of power.

In 2009, then-US President Barack Obama vowed to reduce the role of nuclear weapons, with the goal of eventually eliminating them. However, last year, in the final months of his presidency, he urged NATO members to boycott the UN's treaty talks, saying a ban would obstruct cooperation and hamper the alliance's capacity to respond to a nuclear threat.

President Donald Trump took that rhetoric further in a tweet shortly before he took office in January by seemingly threatening a nuclear arms race with China, saying "we will outmatch them at every pass and outlast them all."

Last week, a White House aide said the administration was reviewing the US' pledge towards a world without nuclear weapons - an aim required by a key arms control treaty.