The world's longest tunnel took shape Friday deep beneath the Swiss Alps. The Gotthard Base Tunnel will become an important part of Europe's high-speed rail network and hopefully save the Alps from environmental damage. 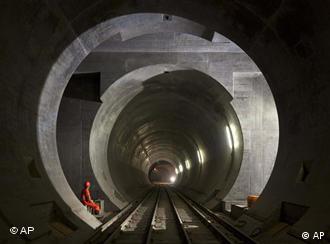 Before a crowd of expectant workers and journalists, a gigantic 9.5-meter (31-foot) wide drilling machine called Sissi on Friday chewed its way through the remaining 1.5 meters of rock that joined the two ends of the Gotthard Base Tunnel, some 2,000 meters under the Swiss Alps.

It's hoped the 57-kilometer (35.4-mile) tunnel will take heavy trucks off the roads and reduce pollution over the Alps when it opens in 2017.

"The Gotthard will forever be a spectacular and grandiose monument with which all tunnels will be compared," said Moritz Leuenberger, Switzerland's transport minister.

The breakthrough made the Gotthard Base Tunnel the longest tunnel in the world, exceeding the 53.8-kilometer Seikan rail tunnel linking the Japanese islands of Honshu and Hokkaido and the world's longest road tunnel, the 24.5-kilometer Laerdal in Norway. 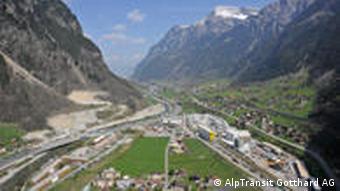 The 9.8 billion Swiss franc (7 billion euro/$10.2 billion) tunnel is part of a larger project to shift the haulage of goods from roads to rails, spurred mainly by a concern that heavy trucks were destroying Switzerland's pristine Alpine landscape.

"The heat and exhaust fumes from the trucks traveling over the Gotthard Pass each year damage plants, which are more sensitive at higher altitudes," Thomas Bolli from Swiss the environmental group Alpen Initiative told Deutsche Welle.

Another problem is the noise pollution. Sound waves can travel much further in an upward direction.

"On the top of a mountain, you can hear the motorway 3,000 meters below you, which obviously has a negative impact on people living in the mountains," Bolli added.

At least 1.2 million trucks cross the Swiss Alps each year and about a million of them pass through the St. Gotthard road tunnel. It's hoped that the number of freight vehicles will be halved once the Gotthard rail tunnel opens in 2017.

Around 300 trains should be able to speed through the Gotthard's twin tubes every day, at up to 250 kilometers per hour for passenger trains, according to planners.

Passengers will ultimately be able to speed from the Italian city of Milan to Zurich in less than three hours, cutting the journey time by an hour.

The Gotthard Tunnel is an engineering marvel

Switzerland struggled to convince skeptical European neighbors to support its ambitious and costly transalpine rail plans in the 1990s.

In a shock referendum in 1994, Swiss voters supported a green motion to stop heavy trucks crossing the Alps.

The tunnel has cost each Swiss taxpayer almost 1,000 euros and a nationwide opinion poll published on Wednesday suggested that the Swiss think it was worth the money.

Sixty-seven percent of those surveyed support a ban on truck traffic through the St. Gotthard road tunnel, according to the poll commissioned by an Alpine environmental lobby group.

In recent years, Austria, France and Italy have set in motion two similar and monumental rail tunnel projects through the eastern and western Alps.

EU hopes to charge trucks for air and noise pollution

A long-disputed proposal for taxing road haulage companies for air and noise pollution could gain momentum this week when EU transportation ministers meet to try and end a two-year deadlock. (13.10.2010)

Germany's Mosel Valley produces some of the world's best Rieslings. But now this pristine winemaking region is threatened by a bridge that is to span the valley, against the wishes of many locals and winemakers. (17.04.2010)

Swiss call on pope for help over climate change

The inhabitants of two small Swiss villages are appealing to Pope Benedict XVI to alter a long-standing vow which they hope will help stop a glacier melting. (07.08.2009)