EU hopes to charge trucks for air and noise pollution | Business | Economy and finance news from a German perspective | DW | 13.10.2010

EU hopes to charge trucks for air and noise pollution

A long-disputed proposal for taxing road haulage companies for air and noise pollution could gain momentum this week when EU transportation ministers meet to try and end a two-year deadlock. 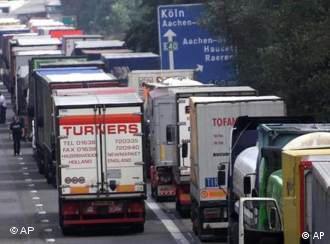 Germany has no shortage of trucks on its highways

European Union transportation ministers meeting in Brussels to amend the "Eurovignette" Directive could strike a deal on Friday to make truck operators pay a pollution fee. But they aren't expected to approve a more controversial proposal on a congestion charge.

The ministers have been discussing changes to the directive for more than two years. Among the contentious issues: charging truckers for environmental damage, which isn't mandatory under the current legislation.

The new rules would require truck operators to pay for the air and noise pollution caused by their vehicles, in addition to the tolls they're already paying for road building and repair. The additional costs could be as high as 0.5 euro cents per kilometer. 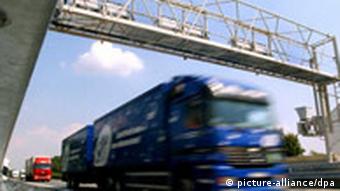 Truckers already pay a toll to use German autobahns

Germany already has a toll system for heavy goods vehicles and currently charges between 17 and 18 cents per kilometer, according to Adolf Zobel, managing director of the German Freight and Waste Trucking Association (BGL). A part of the fee goes to air and noise pollution infrastructure measures such as noise-reducing asphalt and noise retention walls, he told Deutsche Welle.

While Zobel acknowledges the reasons for charging a pollution fee, he objects to the current proposal that would allow EU member states to decide how the revenue should be spent. "We say it must go entirely to infrastructure, including air and noise pollution measures; roads need to have their own financing system," he said. "But Brussels is considering allowing member states to use the money as they please."

BGL and nearly all other European trucking associations object to the proposed road congestion charge. And they're not alone. Numerous national governments, worried about compounding truckers' expenses, oppose the plan as well

To win them over, the EU has weakened the proposal. Under a compromise now on the table, any congestion fee would have to be "revenue neutral". That means if national authorities, for instance, charge truckers higher tolls to use roads in peak hours, then they would have to reduce off-peak tolls by the same amount.

"A big problem with the revenue-neutral idea is that a lot of truckers really can't decide at what time of the day they can drive," Zobel said. "That decision is often made by their customers."

Nor are environmental groups excited about the current proposal – but for a completely different reason. "Everything has been watered down," said Nina Renshaw, deputy director of Transport and Environment, an organization that promotes the "polluter-pays" principle. "It's really important that congestion be part of the new directive." 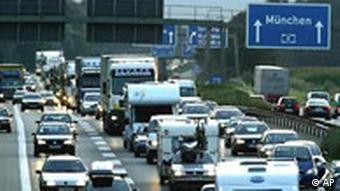 Congestion is a popular word in Germany around vacation time

Congestion, she told Deutsche Welle, is a significant contributor to both air and noise pollution, so a mandatory fee aimed at reducing it only makes sense.

The Eurovignette Directive was first adopted in 1993. It was revised in 2006 before member states’ squabbling over further changes brought talks to a standstill in 2008.

The directive was put back on the European policy agenda by Belgium, which has taken over the six-month rotating presidency of the Council of the EU.

If the transportation ministers reach an agreement on amending the directive, then the proposed legislation must go to the European Parliament for final approval.

The European Commission has adopted rules to encourage a single system for electronic toll payments on the bloc's roads, potentially saving drivers the hassle of queuing up or digging out credit cards at toll booths. (06.10.2009)

In the Fast Lane to Controversy

The Autobahn is a German icon, right up there with beer and Oktoberfest. So a controversial proposal to sell off the country's renowned highway system has, expectedly, kicked up a storm of protest. (17.10.2005)