"Big John," as the dinosaur was nicknamed, went for millions above the initial estimate from French auction house Druot. 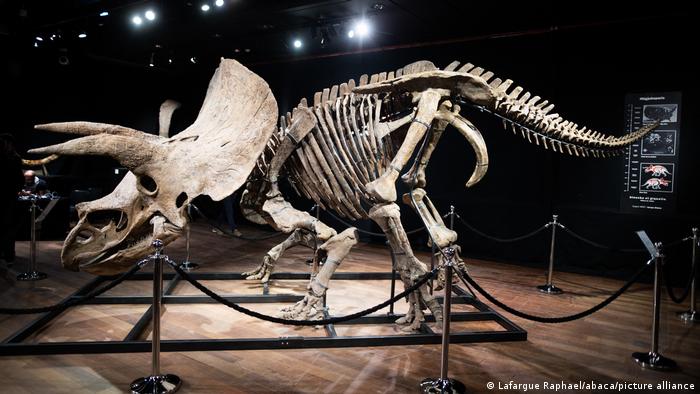 The dinosaur died in an ancient flood plain, allowing the conservation of his skeleton in mud.

An anonymous collector in the United States is now the proud owner of the biggest triceratops fossils ever discovered by paleontologists. Dubbed "Big John," he sold for a whopping €6.65 million ($7.74 million) at a Paris auction on Thursday.

"Big John" refers to the land where the remains were found, in modern-day South Dakota. The fossils are more than 66 million years old, and have been certified by the Guinness Book of World Records as the largest example of its species ever found.

Djuan Rivers, a representative for the buyer, said "that individual is absolutely thrilled," at acquiring the piece.

The triceratops was uncovered over years of painstaking work by scientists. The first piece of bone, a fragment of the dinosaur's mammoth 2.62-meter long skull, was discovered in 2014. By the end of 2015, 60% of the fossils had been uncovered. It is rare that so much of a skeleton is able to be dug up.

The fragments of the animal's bones were then painstakingly put together in a lab in Italy.

"The history behind this and the curation of it is absolutely impressive, so to be able to be a part of preserving something of this nature that was actually found in the US, in South Dakota, is also something extremely special," Rivers said.

'Big John' died from blow to the head, researchers believe

As they worked to piece over 200 pieces of skeleton back together, researchers discovered that "Big John" had died from a blow to the head, most likely having been struck by another triceratops.

French auction house Drouot had initially estimated the skeleton would fetch between €1.2-1.5 million, and then bumped the price to 5.5 million including all fees and others costs.

"It's a record for Europe," said auctioneer Alexandre Giquello, adding that the relatively new market of dinosaur fossils was growing exponentially.