The US and Italy have pressed Libya’s divided factions to lay down their weapons and back a UN brokered peace plan. Forming a national unity government is key to the talks which may halt ‘IS’ militants. 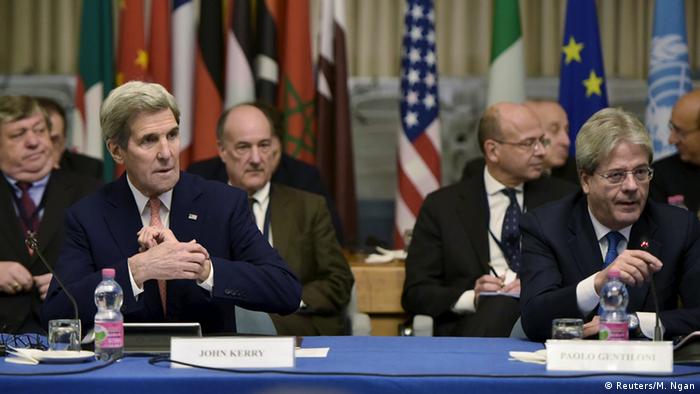 Italy and the United States are leading an international diplomatic push to get Libya's warring factions to put their names to a deal to form a unity government which diplomats hope will ultimately halt the spread of “Islamic State” (IS) extremists.

US Secretary of State John Kerry and his Italian counterpart, Paolo Gentiloni were among ministers from 20 countries at a conference in Rome on Sunday intended to maximize the pressure to end the chaos that has devastated the country since its dictator Mohmmar Gadhafi was overthrown in 2011.

Delegates, including officials from the UN, the EU and the Arab league, pledged their support for the North African state.

“We came here today because we cannot allow the status quo to continue,” Kerry said at the close of talks.

The ministers were joined in the afternoon by 15 Libyan officials from the country's rival parliaments, an internationally-recognized one in Tobruk and an Islamist-backed assembly in Tripoli.

From inside the meeting, Kerry posted this tweet about the need to establish a secure and unified country.

Last week delegates from Libya's two rival governments agreed to December 16 as a date to sign the tabled deal in Morocco, but opponents are still resisting.

Kerry insisted that the majority of both parliaments supported the peace plan, adding that only fringe players were obstructing the progress.

Officials who came to Rome “have decided they are not going to let Libya be the prisoner of one or two people or small groups,” Kerry added.

UN envoy Martin Kobler, who brokered the accord, said “they represent the majority, the voice of the people.”

Speaking on condition of anonymity, a senior US State Department official said Saturday's meeting endorsed the Libyan agreement, hoping it would give the people confidence to move ahead knowing they were backed by the international community.

“Libyans wanted to know that if they took this step the international community would support them on it,” the official told the Reuters news agency.

‘Libyans want to fight back'

The proposed agreement would permit a new Libyan government to request international military assistance to fight the growing presence of IS, which has increased since a US-backed mission toppled Gadhafi.

“Libyans want to fight back, they want international help in fighting back,” the official said. “That is up to the Libyans, ultimately, but we expect that they will do so, and the outsiders will then help with training and equipping in appropriate ways.”

Libya is less than 300 kilometers (190 miles) across the Mediterranean Sea from Italy, with Rome seeking to focus international attention on Libya since last month's deadly terrorist attacks in Paris.

Delegates from Libya, the UN, and other global powers have gathered in Italy to broker a deal for a unity government. Rival factions have already tentatively agreed to a truce in order to fight 'IS' terrorists. (13.12.2015)

Libya's opposing parties aim to form a unity government at a meeting in Rome. The conference will also aim to mobilize international aid for the country. Time is short, as "IS" is growing stronger in Libya. (12.12.2015)

Rival parliaments have agreed to sign a UN-backed deal next week to end chaotic fighting. Both sides want a national unity government to confront rise of Islamist militias. (12.12.2015)