Berlin is the German city that's profiting most economically from the crowds of foreign World Cup tourists descending on the country. Aside from watching games, some visitors are spending a fortune. 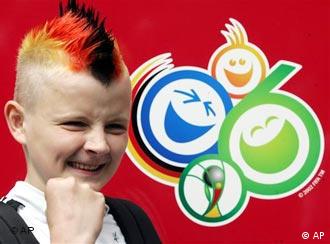 Berliners have every reason to be happy about the World Cup

For the cash-strapped German capital, the soccer World Cup is a real boon. With 500,000 new arrivals in the city every day, Berlin boasts more visitors than any other city that's hosting the soccer matches.

Of the half a million visitors here per day, no fewer than 200,000 stay in hotels and bed-and-breakfast places. Many shops in downtown Berlin are registering record turnovers with soccer-related souvenirs selling like hot cakes.

"All the guests from foreign countries visiting Germany are coming in this shop," said one street vendor near the Brandenburg Gate. "It's not the German people, it's just outside people that come in here and they are especially interested in souvenirs for the world championship." 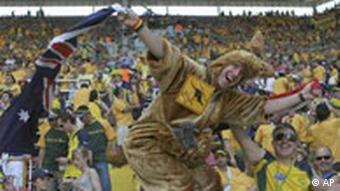 Australian fans may look funny, but they're bringing much-needed cash to Germany

An Australian tourist nearby, who had accompanied his team to their first World Cup in 32 years, was just about to get a feel of the city and find his way around.

"I'm just going around, seeing the sites and eating the wonderful German food," he said, adding that he is certain that at the end of his stay in Berlin his pockets will be much emptier as he only gets about 50 euro cents (60 US cents) for one Australian dollar.

"We have to be careful with what we spend," he said. "But the prices here do seem to be quite reasonable. So even with the exchange rate it's always on par with what I would spend in Australia."

According to the latest statistics, the ordinary Berlin visitor during the World Cup spends about 180 euros on average, hotel costs included. This means that Berlin collects some 50 million euros from tourists every day. 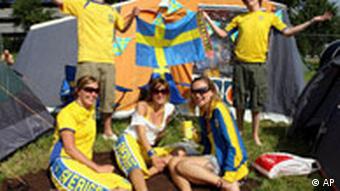 Some Swedes are roughing it, but they do love German beer

The Swedish tourists, for example, who were in town for Thursday's match pitting their team against Paraguay, were certainly willing to add to the windfall. But how much money were they willing to spend here?

Two hundreds euros, said one man, who was echoed by a female fan.

Lots of beer and sausages 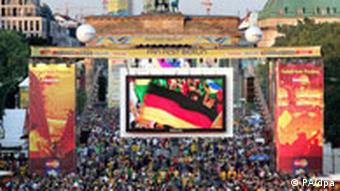 The so-called fan mile in front of the Brandenburg Gate

Business has been particularly brisk on Berlin's so-called "fan mile" -- a two-kilometer-long (1.2 miles) stretch for soccer buffs in the city center that starts right behind the Brandenburg Gate.

The mile boasts several public viewing areas, with street vendors flanking the street. Among other things, they've already sold one and a half million liters of beer and one and half million German sausages.

Germany's influential DIW economic research institute released a forecast that the World Cup would not significantly aid the country's economy. Yet Portugal's experience in 2004 was slightly different. (May 21, 2006)

And the Winner is … German Tourism

With a million foreign visitors expected for the 2006 World Cup soccer games, and another 40 million television viewers globally, the German tourism industry is eager to promote curry sausages and the Cologne Cathedral. (March 12, 2006)

Germans are not exactly known as a nation of charmers, but the World Cup mania may change all that. A national friendliness campaign is pumping millions into putting the smile on every German face. (March 8, 2006)