Paul Pogba's late lob spared France's blushes after Les Blues were taken to the wire by unfancied Australia. Pogba's intervention was neccessary after Mile Jedinak's penalty had levelled things up for Australia. 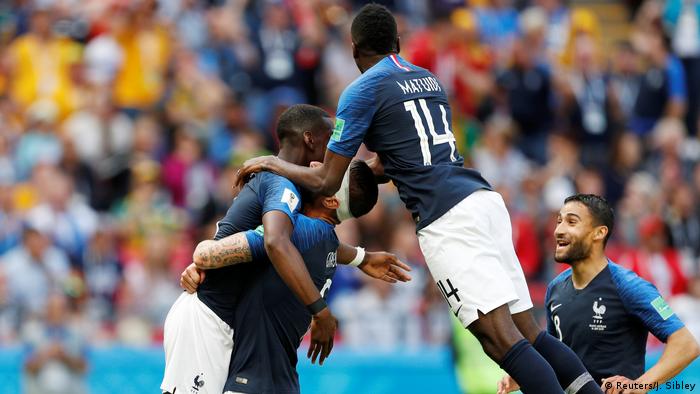 It’s safe to say this match won’t be included in any "Best of" montage reels when all is said and done. France, so unimaginaive for practically the entire 90 minutes, are off to a winning start, but there is very little else they can be pleased with on an afternoon when they made life hard for themselves.

That both France goals arrived thanks to the intervention of technology speaks volumes about how unnecessarily tight this game was. Antoine Griezmann dispatched his penalty with ease to give his team the lead on the 58 minute mark, though one suspects it wouldn’t have even been awarded at previous tournaments, given the refree allowed play to continue before reviewing the incident by the side of the pitch. On balance it was the correct decision, Josh Risdon catching a whole lot of the Griezmann as the Atletico striker homed in on the Australia goal.

The Socceroos, obdurate from the opening whistle, struck back almost instantly. The refree was at the centre of things again, awarding a penalty after the ball struck Samuel Umtiti’s arm in the penalty area. Mile Jedinak never looked like missing. 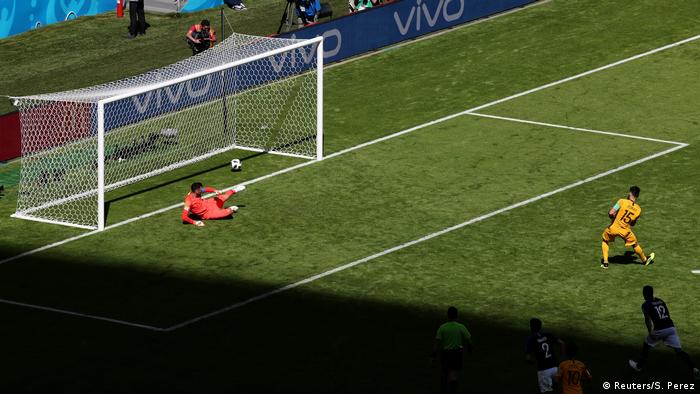 Mile Jedinak equalizes from the spot for Australia

If fans were hoping a quick-fire pair of goals would liven up a turgid game, they were soon disappointed. The dross that preceded Griezmann’s opener continued as Australia dug deep and France did their very best not to trouble Matthew Ryan, Brighton and Hove Albion and Australia’s no.1.

Just as Australia fans were daring to believe a point had been secured against one of the pre-tournament favorites, France took the lead again. Paul Pogba, who had vacillated between anonymous and wretched for the preceding 80 minutes, looped a hopeful ball towards the Australia goal and appeared as surprised as anyone when it dropped in off the underside of the bar. The referee consulted his smartwatch and Australia’s heartbreak was confirmed.

France fans will be hoping the performance was a result of jitters, as opposed to issues with cohesion and tactics. Australia, bruised and beaten, will take heart from a solid performance but know another loss will likely spell the end of their Russian adventure.

+++ Refresh page for live updates. All times in CEST+++

FULL TIME: That's it. A big let off for France, who were pretty poor throughout but pick up the three points thanks to a rare moment of quality from Paul Pogba. It's a cruel blow for Australia, who matched their more illustrious opponents for most of the match. But with Peru and Denmark to come, it's far from over for the Socceroos. France will need to be much better than this to match their expectations.

90+4 - Australia try a couple of crosses and have a deep throw-in. Last chance.

90+2 - Ryan gets himself in a spot of bother with a cleraance and hacks out of play. Time running out.

90' - Mbappe hares through on the left and Ryan's out of the box to meet him . The PSG man lobs a ball back in but France can't get a shot away. There'll be five minutes of injury time.

89' - The ball is at the wrong end from Australian perspective. They can't get out of their half.

87' - Have Australia got anything left? They look tired and Bezich goes in to the book for a frustrated grab of Fekir's shirt.

83' - The goalline technology has just flashed up and that can't have been more than a centimeter over the line. So tough to take for the Aussies and this looks like being a huge let off for France. Australia have to gamble now and Arzani replaces Kruse.

80' - GOAL! France finally get themselves together and carve out a lovely move, Pogba exchanges passes with Giroud and dinks it over Ryan beautifully. It hits the underside of the bar and lands just over the line. That's cruel on Australia.

78' - Last change for France. Matuidi for Tolisso. The game is very scrappy now but tiredness may well play a role in the closing stages. Australia have done a lot of running.

76' - A cynical trip from the otherwise-anonymous Tolisso earns him a booking.

73' - Pavard tries an outrageous and misguided scissor volley that is not even remotely close.

71' - Another sub for Australia. Irvine on for Rogic. That looks like an attempt to tighten things up from Bert van Marwijk.

70' - The French pair are on. Giorud for goalscorer Griezmann and Fekir for Dembele, who has been poor.

68' -Fekir and Giroud look ready to come on for France. They need something here, they have lacked fluency all game. Giroud should at least ensure the ball sticks up front.

65' - Australia make the first change of the day. Juric replacing Nabbout up top.

62' - GOAL! Jedinak rolls it down the middle and the Socceroos are level!

60' - PENALTY TO AUSTRALIA! Unbelievable. Umtiti is penalized for handling the ball as it went over his head. Totally unneccessary that one.

59' - France come again through Dembele and Griezmann gets a shot away. But he's off balance and screws wide.

58' - GOAL! Griezmann absolutely leathers it in to the right corner. France lead.

55' -  We have a VAR call.. Griezmann races clear from Pogba's through ball and hits the deck under challenge from Risdon. Looks a penalty to me but the referee didn't initially give it.

53' - Leckie finds Risdon on the overlap after some smart hold up play but his cross is just behind the man. Decent stuff from the men in gold.

50' - Dembele looks to play an ambitious ball out to the left but it runs straight out of play. Fair to say France haven't exactly flown out of the box.

46' - The players are back out and we're off. Can Australia keep this up?

HALF TIME: The referee does us all a favor and blows up. After a promising first 10 minutes, France have shown next to nothing going forward. Despite clinging on early, Australia probably came closest when Pavard almost deflected in to his own net and they will be very happy with their first half work. But there's a fair way to go yet.

45' - Leckie has a pop for Australia but it's not troubling Lloris.

44' - Dembele swings a hopeful cross straight in to the arms of Ryan. This is very poor from France. At least they have options to change it up. They may need them.

40' - This is pretty soporific stuff now, which is exactly what Australia want. France seem to be waiting for things to happen. Griezmann is dropping deep becuase his team are not moving the ball well through the lines. It's all very ponderous.

36' - Mooy makes an excellent slide tackle to deny Mbappe the chance to run. The Aussie fans loved that one.

33' - Pogba forces the ball wide to Hernandez. It's a decent opening but he takes too long, drags the shot across goal and it's cleared. France stepping it up a gear though.

31' - Griezmann almost latches on to a dinked ball over the top but Milligan just about makes up the ground to nick it off his toe.

28' - Mooy has another free kick, this time on the right, but Lloris makes a dominant claim. France have been somewhat muzzled after their fast start and the Aussies will be delighted with their work so far.

23' - Didier Deschamps is not happy with the referee. Sainsbury looked outsripped by Dembele and seemed to block the Barcelona man's path but the man in the middle was having none of it.

22' - That spell from Australia seems to have calmed them. They looked in big trouble early on but it's a little more even now.

17' - Another free kick from Mooy in a similar area and Australia go so, so close. Someone gets a flick and Pavard deflects it towards his own goal. But Lloris is down well to paw it away. The resulting corner comes to nothing.

12' - Mooy lifts in a free kick from the left that Kruse gets a head to it but it's harmless. At least Australia have got their foot on the ball a little in the last couple of minutes.

8' - Risdon brings down Hernandez. Australia are struggling enormously with France's pace.Griezmann grazes the free kick with his head but it bounces off a defender and in to Ryan's arms.

6' - Another save from Ryan as Griezmann chances his arm from 25 yards. That's three saves in the first six minutes from the Brighton keeper.

5' - Milligan clips Mbappe on the edge of the box and France have a freekick in a dangerous position. Pogba strikes it straight at Ryan, who is probably in for a busy 90 minutes.

2' - A beautifully-weighted through ball from Pavard sets Griezmann off straight away. The angle is tight but he forces Ryan to tip round the post. Big early warning for the Aussies.

11:55 - We're almost ready to roll in Kazan. There look to be less empty seats for this game than some of the early matches.

11:50 - The players are in the tunnel and the enormous flags are being unfurled on the pitch. What's a decent result for Australia today? Would they take a 2-0 loss?

11:45 - Hello, and welcome to day three of Russia 2018. Hopefully we've all had time to recover from that absolute pearler of a game between Portugal and Spain last night. While we're waiting, why not have a read of our forensic analysis of that instant classic?

The teams have been announced for today's early game and there's a bit of a shock for Les Blues, who name Stuttgart's Benjamin Pavard at right back. He's winning his seventh cap after a stellar rise over the last couple of years. France's forward line looks, on paper, as good as any at the tournament while they opt for Bayern Munich's record signing Corentin Tolisso in midfield.

There's no place for 38-year-old Australian talisman Tim Cahill in their starting lineup but they do boast a scattering of players from major league's. Huddersfield's Aaron Mooy will attempt to conduct from midfield while the pace of Hertha Berlin's Mathew Leckie may cause a few issues for the 1998 champions.