Wolfsburg overcame the heartache of their recent Champions League exit with victory over rivals Bayern Munich in the German Cup semifinal. Only Eintracht Frankfurt stand between Wolfsburg and a seventh straight cup. 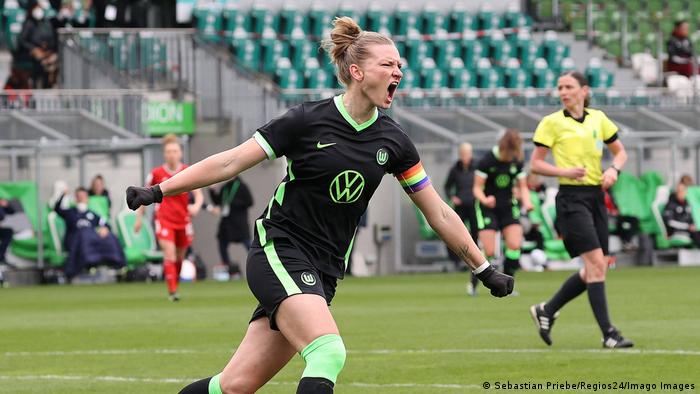 Wolfsburg's quest to retain their German Cup crown remains on track after overcoming the greatest hurdle that they're likely to face — inflicting a first defeat of the season on Bayern Munich in the process.

For Wolfsburg, it's a victory that means so much. They came into the game fresh from a demoralizing and comprehensive 5-1 aggregate defeat by Chelsea in the Champions League, a loss that had suggested something of a changing of the guard at the top end of the women's game on the continent.

Faced with Bayern Munich back home in the German Cup, it would have been easy for Wolfsburg to feel sorry for themselves against an opponent in astounding form. They'd won all 26 games they'd played this season, leaving Wolfsburg in their wake in the Bundesliga, too. 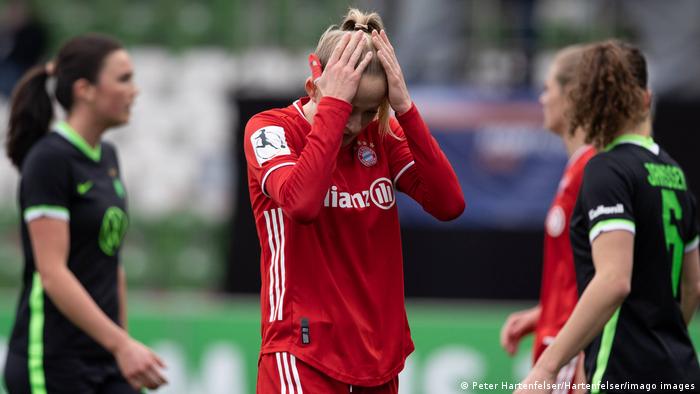 So this victory was redemption for Wolfsburg, whose domestic and European dominance has come under threat from teams such as Chelsea and Bayern, sides who are beginning to invest more into their female teams and challenge the supremacy Wolfsburg have enjoyed over the past decade.

"We are still a top club and we showed that today," said Wolfsburg midfielder Lena Oberdorf at full time. "We dominated the game really well."

Bayern coach Jens Scheuer was in agreement, paying tribute to the "robustness" shown by his team's opponents.

"In the end it was a deserved win for Wolfsburg - we have to recognize that," Scheuer conceded. "We wanted to dominate the game but we let the robustness of the Wolfsburg women determine the outcome."

Wolfsburg's performance demonstrated their maturity, taking an early lead and not sitting on it until they had a two-goal cushion. Bayern buckled under the pressure and had no response, it may prove to be the blueprint for how to beat the Bavarians.

Captain Alexandra Popp had set Wolfsburg on the path to victory with a confident strike on the run, hammering home from just inside the box. Popp, a serial winner with Wolfsburg, was superb, setting the tone for her side, who were good value for the two-goal advantage by the time Ewa Pajor doubled their lead in first half stoppage time.

Bayern, whose hopes of a Bundesliga, Champions League and German Cup treble have now been dashed, created very little and, by the time last woman Simone Boye Sorensen was shown a straight red card for a professional foul, Bayern were well beaten. The only concern for Wolfsburg, who will meet Eintracht Frankfurt in the final in Cologne on May 30, came late on when Popp picked up a foot injury, forcing her off.

While Bayern remain well-placed to end Wolfsburg's run of dominance in the Bundesliga, this victory was a timely reminder that Wolfsburg are still a club to be reckoned with. And with Bayern returning to Wolfsburg in the Bundesliga on May 9, Wolfsburg may have just cracked the code for how to beat their rivals.

SC Sand are sinking ever closer to relegation, Eintracht Frankfurt are falling short of expectations and the debate around sexism continues. But there's more positive news for Chelsea and England's Women's Super League.