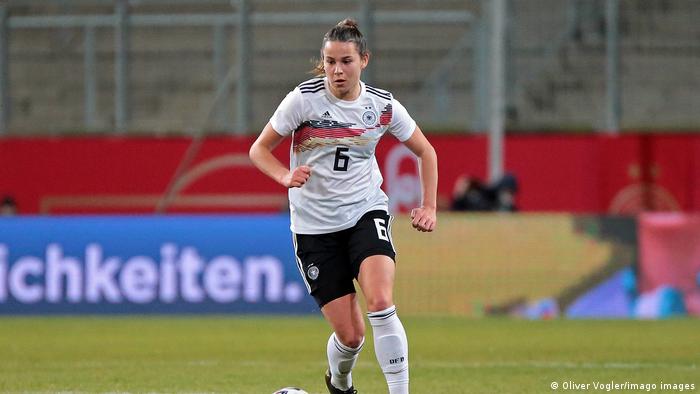 Lena Oberdorf has made her mark at both ends of the pitch.

DW: Lena Oberdorf, your game seems to be developing rapidly. What did you learn in Sunday's match against the Belgians?

Lena Oberdorf: I think I gain a bit of experience with every game. I let myself be brushed aside a bit for one or two headers. You notice the experience of your opponents when you come into contact just before the header. Now I know to keep a bit of distance and then go in to the challenge with a bit more momentum. That way I don't get the contact beforehand and I can win the duel. And, of course, you keep learning how to keep it simple and play the easy passes.

What has it been liked competing in this three-team tournament involving Germany, Belgium during a global pandemic?

It's actually quite relaxed for us. We arrive at the hotel, we stay in our rooms until the coronavirus test is done,  and then we get the results. It’s only then that are we together in our groups at the tables. All in all, we have a lot of rules: always wearing a mask, an spending a lot of time alone in our rooms. Naturally, it's a pity that you don't have so much contact with the other girls, except on the football field, but I think we just have to adapt. We just have to accept the rules and everything that goes with it. It's just nice to be on the pitch.

"Three Nations. One Goal" is the motto of this tournament which aims to help bring the 2027 World Cup to Belgium, the Netherlands and Germany. What would that be like?

That would definitely be really cool. In 2027, of course, we hope that there will be spectators again. That's why it would be even nicer, because families could come to the stadium again. The three countries are not so far apart that you can't come and watch the away games either. There are many beautiful stadiums in Holland, Belgium and Germany. I would definitely be very happy if that worked out.

You play central defender or defensive midfield, but you've already scored six goals this season for your new club, Wolfsburg. Are you more of a defensive player or more of a goal scorer?

I think it's important nowadays to be a defensive player who is also capable of scoring goals. In Wolfsburg, I benefit from the fact that I play further forward, unlike in the national team. But here I'm still allowed to go forward for corners and free kicks. And Martina [Voss-Tecklenburg, Germany head coach] is always calling for us defensive players to get involved up front, which is why you're actually both a defensive player and a goal scorer. 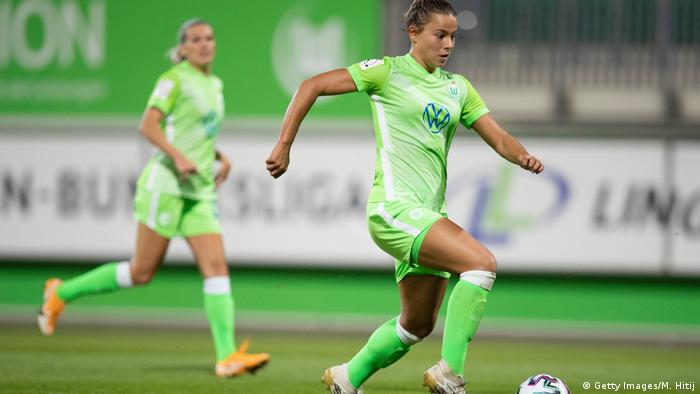 Oberdorf got her big move to Wolfsburg in 2020

In the national team you wear number six, but your club number is five. What is your favourite shirt number and does it perhaps have something to do with Bayern and West Germany legend Franz Beckenbauer, who also wore number five?

No, it has nothing to do with that. I don't really care what number I have, as long as I play from the start [laughs]. The number is secondary for me. I used to say, and my parents always told me: 'It's not important what's on the jersey, but who's in it.' And that's why I don't care what number is on the back. The main thing is to play.

Lena Oberdorf, 19, is one of the most promising talents in German women's football. She moved from SGS Essen to Wolfsburg in the summer of 2020. In April 2019, she made her debut for the senior national team. Oberdorf was European under-17 champion with Germany in 2017.

The interview was conducted by Steffen Focke.

Her coach says she's "fantastic," and Lena Oberdorf has made her mark at the World Cup while taking time out from school. With Germany through to round of 16, she could enhance her reputation against South Africa.