While 26 goals in six matches made for an entertaining 22nd and final matchday of the Bundesliga season, it also revealed glaring gaps in quality in the women's game. Here are five theses based on the season just gone. 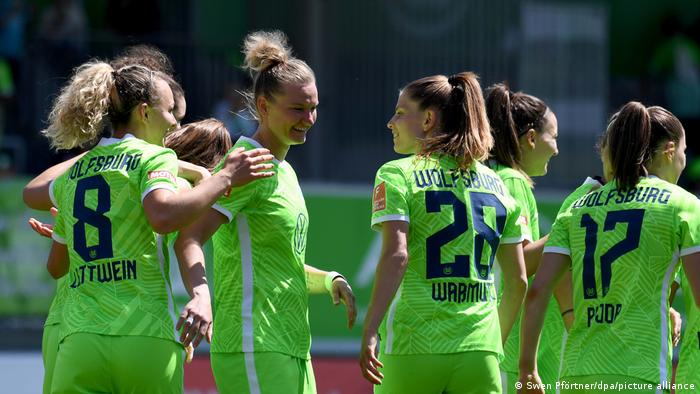 Two years ago, there would have been an outcry; now there's not much more than a shrug of the shoulders: It was COVID-19 that decided the title race. What would have happened if Bayern Munich hadn't had 11 players infected with COVID-19 at the same time during the decisive phase of the season? How would the key match for the Bundesliga title have turned out, in which a decimated Bayern collapsed 6-0 against Wolfsburg? Or the cup semifinal shortly thereafter, which was contested by a lot of players who had just recovered from a bout with the virus. No one will be able to answer these questions, and curiously, hardly anyone is asking them. The show must go on, after all, money must be earned. In a business in which there is no fair competition, the issue of fairness has been conspicuous by its absence, even when it comes to COVID-19. There was a complete absence of discourse. Bayern Munich, meanwhile, found themselves in the unfamiliar position of scoring sympathy points as tragic heroines.

Wolfsburg were the better team

Based on the evidence, the better of the two teams won the title. Wolfsburg, who closed out the season with a 7-1 win over Leverkusen, were more confident and creative than Bayern, especially in the second half – and had more individual class on the pitch. Tabea Wassmuth and Sveindis Jonsdottir were two of the big success stories, and with Dutchwoman Jill Roord at their heart, they've found a player who looks like she's been with Wolfsburg forever. And yes, in Tommy Stroot they got a new coach before the start of the season. The fact that he was forgotten about so quickly is a good thing. Last but not least, it's also worth looking at their head-to-head record: Wolfsburg also beat Bayern 3-1 in the cup, as well as taking their first encounter of the Bundesliga season 1-0. It's common wisdom that a team that beats its rivals three times in the course of a season belongs at the top. The additions of Merle Frohms, Jule Brand and Sara Agrez, underline the fact that Wolfsburg is still the top choice for anyone who wants to make it big.

Do miracles still exist? Possibly, but certainly not in the women's Bundesliga anymore. On the last matchday, everything fell into place as expected: The women of Frankfurt won 4-0 against Bremen and thus moved into third place and a Champions League berth. By losing 5-0 in Munich, Turbine Potsdam, still the most successful club in German women's football, slipped down to fourth. And the league as a whole is following the neoliberal model: No regulation, no separate pots for independent women's clubs. To the affluent go the spoils. Frankfurt slipped under the Eintracht umbrella just in time: The Champions League serves to create a new ruling class. But why duplicate a dysfunctional system? This is a good question that will be raised at some point. After all, as soon as the men's and women's first divisions look more the same in terms of teams, the leagues will look more similar. Those who took women's football seriously early on will be left looking up from below. Among those whom this applies to are SC Sand, who were relegated despite their 3-3 draw in Hoffenheim. 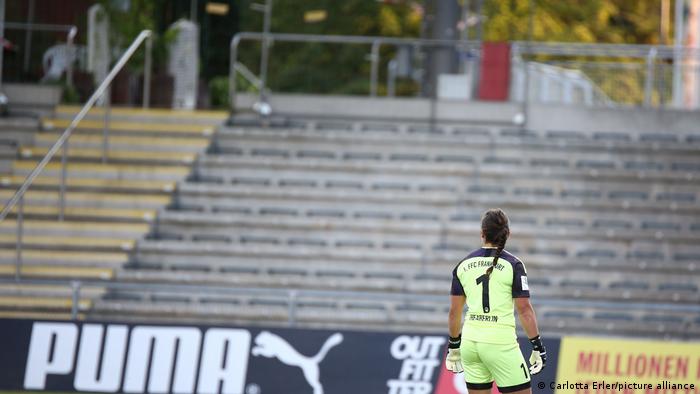 Sold out stadiums are a rarity in the Women's Bundesliga

Only those at the top are benefitting from the boom

The half-hearted gold rush has made it through the pandemic. Clubs like Union Berlin have announced their first division intentions, the European Championship in England is set to be the biggest event in the history of women's football, and the big crowd in Barcelona received a lot of attention. And not only there, but also in Paris, there are more and more links between men's and women's fan communities. More visibility, more respect, a good living: Long-standing demands are coming true. In the domestic leagues, however, everyday life looks different, where clubs are lucky to draw an average crowd of 1,000 – with numbers tending to slide. And the regional leagues can hardly find enough teams to operate. An influx of cash doesn't necessarily translate into a lot of interest. Television presence isn't everything. What is needed is what made men's football great: local relevance and bonds; upward movement from below and a critical community.

A turning point for women's coaches

It wasn't long ago that women's clubs were simply grateful when a male was willing to coach them. After all, the attractiveness of the job compared to the men's Bundesliga continues to be akin to a slice of crispbread vs. a Big Mac. Visibility is close to zero and the pay is comparatively low. For many years, firing a coach was an option exercised only in the event of extreme risk of relegation. After all, firing a coach also means finding a replacement. In this respect, the dismissal of Jens Scheuer, who guided Bayern Munich to second place in the final standings, is a turning point. He was unable to fulfill the ambitious mission of replacing Wolfsburg as Germany's top team. So here too coaches are up for the chop. Whoever succeeds Scheuer, Bayern will have to put more money on the table to attract a bigger name and at increased risk.

A record 91,553 attended Barcelona vs. Real Madrid on March 30 as women's football enjoys more exposure and interest than ever. But average attendances are still below 1,000 in Europe's top leagues.