Women seek a role in Afghanistan peace process | World| Breaking news and perspectives from around the globe | DW | 30.10.2010

UN Resolution 1325 calls on women to be given an equal role in peace negotiations in areas of conflict. But this is far from the case in Afghanistan, where many women are pushing for more participation. 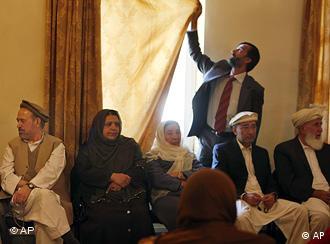 Marzia is a police officer in uniform, still a rare sight in Afghan society, even though the female component of the Afghan security forces is important in a Muslim society. If apartments need to be searched, then Marzia's job is to check the women's bedrooms and closets. 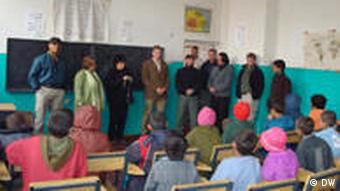 Women in Afghanistan are still struggling to make their voices heard

Marzia says there should be more Afghan women with jobs, and believes that the political climate is auspicious.

"The freedom of movement has improved for women," she said. "Women are now allowed to work alongside men. It doesn't matter where or what it is, women should get jobs."

Although Afghan society may be changing, women are still a minority in positions of responsibility when it comes to peace negotiations - as they are throughout the world.

It was for this reason that the United Nations agreed Resolution 1325 10 years ago, a document that demanded that women be given an equal role in conflict resolution in all regional, national and international institutions.

The prominent Afghan women's rights campaigner Soraya Parlika believes that her country is still a long way from this aim. She points to President Hamid Karzai's newly-founded peace council, of whose 69 members only nine are women. Seven of those nine have been appointed by Karzai, which Parlika believes limits their independence.

"These women are sitting together with men who only know war," she said. "They are not heard and they have no chance to influence the negotiations in any way." 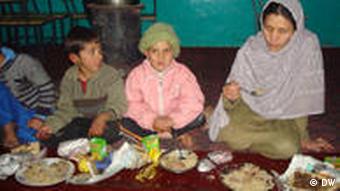 Golzum Seddiqi, director of an initiative for women lawyers in the western town of Herat, does not see the women on the peace council in a particularly positive light.

"Up until now, they don't have any plans or strategies for positions in which they have political or social responsibility," she said. "They need to get rid of other problems first. Some women with no qualifications have used the opportunity to get important positions through bribes and connections."

Peace starts in the family

But Herat provincial councillor Djamila Karimi believes that the lack of qualifications is a minor concern for the women on the peace council. She thinks women are not taken seriously as peace negotiators simply because Afghan women have been locked into a passive role in society that won't be changed overnight.

"These are women who constantly live with the fear of losing family members to the war. I think women can teach their children not to take up weapons in the future," Karimi said.

"A bearded warlord in Afghanistan won't listen to women's demands at the end of the war. But a child listens to its mother."

According to Karimi, many Afghan women want nothing more than to see their children go to school to learn how to build a new Afghan society, while very few want a political career. Instead, they still concentrate on their responsibilities within the family.

Karzai does not bow to pressure over security firms ban

President Hamid Karzai is insisting that he will halt the operations of private security firms in Afghanistan despite opposition from the international community. (26.10.2010)

Warlords to run the Wolesi Jirga all over again

Five weeks after the elections took place the results of the Afghan elections are out. Although they are only preliminary results, they clearly show who the winners and losers are. Ratbil Shamel has this opinion piece: (22.10.2010)

Diplomats from over 40 countries have met in Rome with US commander David Petraeus to discuss the situation in Afghanistan. The conference was chaired by German special representative Michael Steiner. (18.10.2010)