A Nigerian woman and a Kenyan woman are among seven candidates to become the next director-general of the World Trade Organization. The others come from Egypt, South Korea, Mexico, Moldova and Britain. 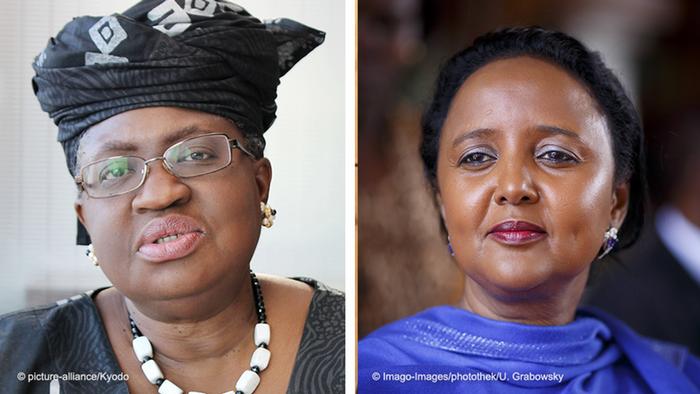 Nigeria's Ngozi Okonjo-Iweala, a development economist and former finance minister (left in photo), and Amina Mohamed, Kenya's sports, culture and heritage minister (right), are among seven candidates to be the next director-general of the World Trade Organization (WTO).

Okonjo-Iweala and Mohamed have been nominated alongside candidates from Egypt, South Korea, Mexico, Moldova and Britain. Nominations close July 8.

The Geneva-based organization is looking for a replacement for Brazil's Roberto Azevedo, who is stepping down in August — a year before the scheduled end of his four-year term.

Azevedo's successor will need to steer the WTO through reforms and negotiations in the face of rising protectionism, a deep recession caused by the coronavirus pandemic and growing trade tensions — notably between the United States and China.

There is broad support to pick a candidate from Africa and a woman, sources following the process told Reuters news agency.

No African has been WTO director-general since its founding in 1995, nor headed its predecessor organization, the General Agreement on Tariffs and Trade (GATT), which started in 1948.

Okonjo-Iweala is a development and finance specialist who spent a 25-year career at the World Bank as a development economist, rising to the position of managing director. 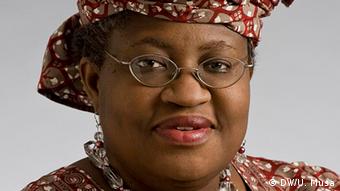 "Trade is a win-win for everybody if it is done properly," Okonjo-Iweala told DW

"Few doubt that Okonjo-Iweala is a force to be reckoned with," the US news site Politico reported in June, calling her a "political heavy hitter" in an article about her nomination.

Okonjo-Iweala was also Nigeria's finance minister twice, serving from 2003 to 2006 under President Olusegun Obasanjo and 2011 to 2015 under Goodluck Jonathan.

During her second term as finance minister, Okonjo-Iweala was "credited with developing reform programs that helped improve governmental transparency and stabilizing the economy," according to the US business magazine Forbes, which ranked her No. 48 among the world's top 50 "Power Women" in 2015.

The Harvard-educated economist, who holds a PhD from MIT, has also served as Nigeria's foreign minister.

The 66-year old sits on the board of the Twitter social media network and Standard Chartered bank, and chairs the board of Gavi, a global vaccine alliance.

"I'm interested in [the WTO] position because I believe in the power of trade to lead to a shared prosperity, to lift people's lives," Okonjo-Iweala told DW in a Facebook Live interview when her nomination was announced.

"Everybody knows that the WTO is going through a rough time," she said, speaking from Washington, DC.

"So I'll be looking to see what critical reforms members can subscribe to — either reforms to the dispute settlement system or in updating the rule book of the WTO, which will take time," Okonjo-Iweala said.

Read more: World Trade Organization in trouble — what you need to know

Okonjo-Iweala noted that Africa's share of world trade is only 3% — something that she believes she could help increase if she were to become the WTO's director-general.

Kenyan Sports, Culture and Heritage Minister Amina Mohamed is a lawyer, diplomat and politician who has vast public service experience at the national and international levels.

"She has been an important player in Kenya's multilateral negotiations in bodies like the Commonwealth and the World Trade Organization," according to the book Muslim Women in Postcolonial Kenya, which noted "her skills in economic and commercial diplomacy."

Mohamed, who is from an ethnic Somali family, also held the position of foreign minister from 2013 to 2018, becoming the first woman to hold this position and the first Muslim woman in Kenya's Cabinet.

Last Friday, she was officially admitted to the state bar.

The 58-year-old, who speaks English, Russian and Swahili, rose through the ranks in Kenya's diplomatic service to become Kenya's ambassador to the WTO and, in 2005, the first woman to chair the WTO's General Council.

Mohamed is a a former assistant secretary-general of the United Nations and deputy executive director of the UN Environment Program's Africa Office, in Nairobi.

She received a master's of law National University of Kyiv, in Ukraine, and later a postgraduate diploma in international relations at the University of Oxford.

Mohamed ran for the WTO director-general position in 2013, but lost to Azevedo. He was reelected in 2017 as the sole candidate.

Nigeria's security deteriorates as armed groups target the capital and abductions increase. Why is the government failing to protect its citizens? +++ The US unveils a new strategy for Africa. But can the two really be 'equal' partners?+++ Trash in Senegal: the residents trying to make a difference.