Wolfsburg the favorites to win yet another domestic double

Wolfsburg are the team to beat in Germany. Essen are the team out to stop the best team in the land from sealing another domestic double. But changing the status quo is not always easy. 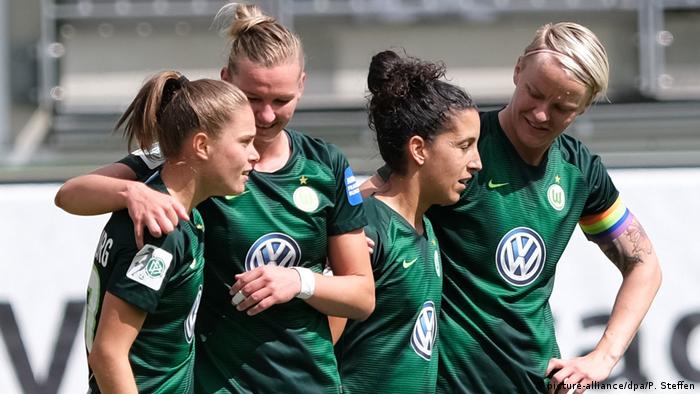 When SGS Essen play Wolfsburg on Saturday in the German Cup final, it is safe to say the team in green and white are the favorites. Wolfsburg is a team coming off its fourth straight league title and are chasing their fourth straight domestic double.They are a tour de force in Germany and one of the best teams in Europe, with a squad full of stars.

Essen is a team that has spent most of the last eight years finishing fifth or sixth in the 12-team German top-flight.

Head coach Markus Högner, who returned as head coach after working as an assistant at Wolfsburg for two years, doesn't need to tell his team that they are the underdogs.

"Of course we are," Högner told DW. "In my first stint as Essen head coach from 2010 to 2016 we made the final once, and in 2014 the situation was similar. Back then, FFC Frankfurt were one of the best teams in Europe with international players, and we were the underdogs. Compared to then (editor's note: Essen lost 3-0), our team is more mature and stronger. Women's football has also developed since then and I would say that Wolfsburg are a bit stronger than Frankfurt were then."

Essen are not only the underdogs; they are the stepping stone club. At the end of the season, Lena Oberdorf (18), Marina Hegering (30) and Lea Schüller (22) will all leave the club. Oberdorf, one of the most talented youth players in Germany, will join Wolfsburg, while Hegering and Schüller will move to league runners-up Bayern Munich.

The middle of the food chain is never an easy spot to be in, but Essen know their position and pride themselves of developing young players with potential, even if they eventually leave. Financially, they cannot compete. The further down the table you go, the greater the gap is.

"It must be said that the gap between the top two or three and the other Bundesliga clubs has widened. Two or three years ago things were much tighter," Wolfsburg sporting director Ralf Kellermann recently told DW in an interview.

This season Wolfsburg won 20 of 22 league games, scoring 93 goals and conceding just eight. Essen finished the season with 11 wins and nine loses and a +2 goal difference. A success, relatively speaking, but still world's apart from the team at the top.

Nevertheless, Kellermann is keen to stress that Wolfsburg don't have star players lining up outside ever year. "Imagine you were 25 years old, a top European player and you had your pick of Barcelona, Paris St. Germain, Olympique Lyon, Chelsea, Arsenal, Manchester City, Bayern and Wolfsburg. You can easily imagine that the economic situation of these other clubs will be quite different than ours, that the appeal of these clubs and cities is completely different."

In Germany though, Wolfsburg are streets ahead, thanks in no small part due to their backing by Volkswagen. Essen don't have that support and they are a different club. Essen offers a starting point, a place to develop. They lift up players, not trophies.

When asked whether he was concerned that Essen, one of the most traditional women's football clubs in Germany, would lose ground to the power of money at the top, Högner was defiant.

"Definitely not. We will continue to be a key part of the Bundesliga because we have a great academy approach. I am convinced that young players will still join our club to develop. We know, though, that it will be tougher because more and more men's clubs are making the jump into the women's game."

There is undoubtedly excitement about Schalke starting a women's team, the possibility of Borussia Dortmund doing the same, FFC Frankfurt merging into Eintracht Frankfurt and Hertha Berlin offering financial and sporting support to Turbine Potsdam. German men's football clubs seem to be waking up, finally, to the brilliance of the women's game — and how pivotal their role can be in helping it continue to grow. 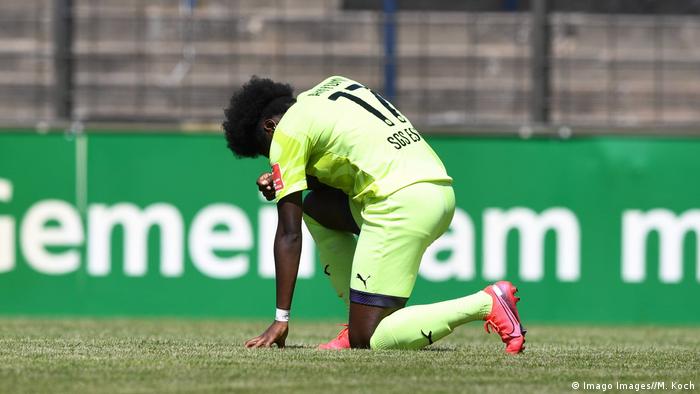 Nicole Anyomi is one of the most talented strikers at Essen

But for those established women's teams who are trying to survive the arrival of these teams poses yet another challenge. It is harder to survive if there are even more teams with greater financial backing than your own. Suddenly there might be four or five top squads to choose from for a player, rather than just one or two. The role of the developing club becomes harder.

But Högner and Essen's vision remains refreshingly steadfast. "In the men's game, there are also smaller clubs such as Freiburg, who have good people, a clear concept and are not pushed over by defeats," Högner said.

If Essen win the German Cup on Saturday, it will be the story of a great underdog team rewarding themselves with something tangible for their years of development.

If they lose, the status quo will have been maintained. It will be a story of Wolfsburg winning again, and another reminder that relying on a miracle from stable, mid-table teams is not enough to create a more competitive sport.

Women's football is not another type of sport

Bad news for the chauvinists at the football table. Scientists from Germany's Sport University Cologne have proved that women who play football can implement tactical approaches just as well as men. (06.06.2020)

A week of protest in the US has sparked worldwide support for the Black Lives Matter movement. In interviews with DW, three black German footballers speak about how they feel about racism. Here is what they told us. (05.06.2020)