Julian Draxler is set to leave Wolfsburg for Paris St Germain after the two clubs agreed on a deal to be completed in the January transfer window. Draxler had first demanded to be moved in the summer. 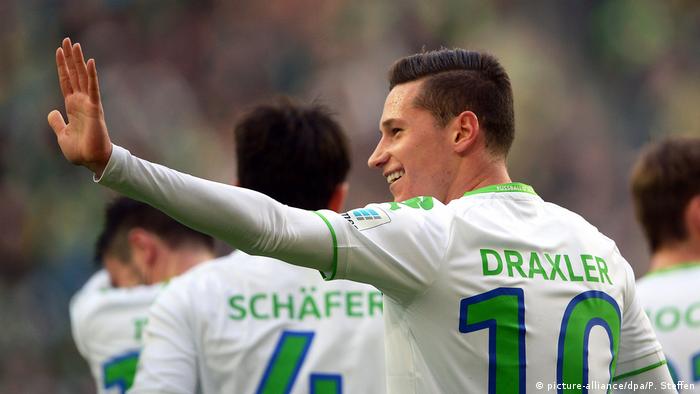 VfL Wolfsburg have confirmed in a statement posted on their website that they have reached agreement with Paris Saint-Germain to sell the 23-year-old Draxler. The deal is conditional upon the Germany player passing a medical.

"We've had some very intense but constructive discussions with Paris Saint-Germain, Julian Draxler and his management over the past few days and we're confident to have reached a satisfactory conclusion for all parties," said Wolfsburg's sporting director, Olaf Rebbe.

As is customary, the two teams have agreed to keep the terms of the deal confidential, but German and French media have reported that it is worth between 36 million and 40 million euros ($37.5 million - $42 million).

"Of course I'm sad to see Julian go, because he's an outstanding footballer. He gave everything in the recent matches against Frankfurt and Gladbach and once again showed how much this club meant to him. I hope his move to France provides him with a fresh challenge," Wolfsburg head coach Valerien Ismael said.

Draxler, who just over two years ago claimed he was happy to stay at Schalke long term, had only moved to Wolfsburg in the summer of 2015 and was meant to replace Kevin de Bruyne after the Belgian had departed for Manchester City.

During last summer's transfer window he demanded that Wolfsburg sell him,but the club initially refused. The team have struggled this season, with both coach Dieter Hecking and sporting director Klaus Allofs getting sacked. Draxler scored five goals in 34 Bundesliga appearances for Wolfsburg. He has 27 caps for Germany (three goals).