After a series of hair-raising setbacks, the Rosetta probe's Philae craft successfully landed on the duck-shaped comet called Chury. Philae seeks answers to the mystery of life on Earth. 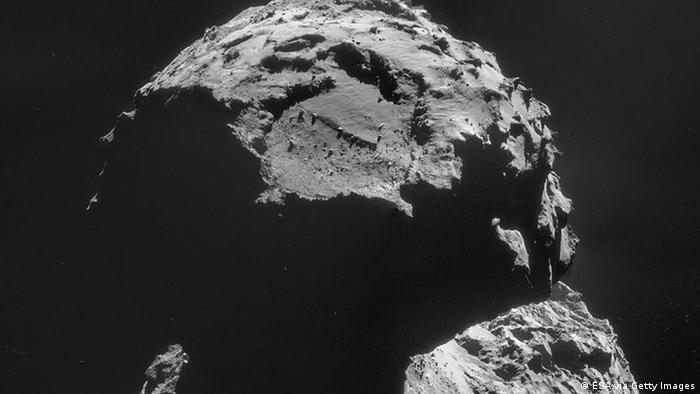 Who knew space exploration could provide so much dramatic tension? Wednesday's landing of the Philae craft on 67P/Churyumov-Gerasimenko (also know as Chury) - the first time a craft has ever touched down on a comet - kept countless space enthusiasts on the edge of their seats. With Chury currently about 500 million kilometers (310 million miles) from Earth, the landing concludes a 10-year chase of the comet by the Rosetta craft.

Despite several potential setbacks that seemed to bring the project to the brink of failure, the European Space Agency (ESA) reported that Philae succeeded in landing on Chury's surface. "A small jump for a robot, a giant jump for humankind ... and for Europe," ESA Director General Jean-Jacques Dordain said at the post-landing conference.

The landing operation got under way when Philae decoupled from Rosetta at around 0900 UTC. The ESA reported a "hiccup" when the craft was first powered up: Although the delay appears to have been only a minor glitch, it seems that Philae's active descent system was not properly activated, which would have provided reverse thrusting to help the craft land on the comet.

The small size of the comet means very low gravitational pull. Philae thus had to rely only on its system of harpoons and screws to keep from bouncing off the surface and floating off into space. "We'll need some luck not to land on a boulder or a steep slope," Philae lander manager Stephan Ulamec had said.

The two Twitter accounts @ESA_Rosetta and @Philae2014 kept a running conversation between Rosetta and Philae. The lander tweeted this after successful decoupling:

After the announcement, ESA scientists determined that the anchoring harpoons had not in fact deployed. However, based on telemetry, Philae was determined to have experienced a soft landing and appears to be resting on Chury's surface.

Now, Philae is using numerous instruments and sensors to take samples and measurements from the comet's surface, and its batteries will allow the rover about 64 hours to do so, with about an extra hour a day of energy provided by a solar panel on the craft. But, with Chury traveling at about 66,000 kilometers per hour (41,000 mph), it will soon reach perihelion, or its closest point to the sun, potentially exposing the Philae lander and the Rosetta craft to damaging radiation.

A problem with the signal from the lander is preventing full communication between it and Rosetta, from where the information can be sent to Earth. But Paolo Ferri, the ESA's head of mission operations, has said the data will be stored until it can be transmitted.

The Rosetta probe is named after the Rosetta Stone, which was discovered in Egypt in 1799 and allowed archaeologists to decode previously indecipherable Egyptian hieroglyphs as the inscriptions were also in Demotic script and ancient Greek.

Likewise, the Rosetta probe is hoped to decipher mysteries of the universe - specifically, the origins of life. The comet Chury is believed to be as old as our solar system, about 4.6 billion years, and may have preserved leftover elements from the solar system's birth.

Researchers will be very interested in evidence for the theory that comets brought the first organic matter and water to Earth, said Klim Churyumov, one of the comet's co-discoverers.

When asked if she likes the comet, Svetlana Gerasimenko, the other co-discoverer, said yes - it reminds her of a boot.

The ESA has narrowed down a single site for the Rosetta lander Philae to make contact with a comet in November. If the operation succeeds, it will be a first of galactic proportions. DW will be live-blogging the landing. (11.11.2014)

Sensoring devices on board the Rosetta spacecraft have detected chemicals in the cloud of comet 67P/Churyumov-Gerasimenko: hydrogen sulfide, ammonia, formaldehyde and hydrogen cyanide - in other words, it stinks. (24.10.2014)