Sensoring devices on board the Rosetta spacecraft have detected chemicals in the cloud of comet 67P/Churyumov-Gerasimenko: hydrogen sulfide, ammonia, formaldehyde and hydrogen cyanide - in other words, it stinks. 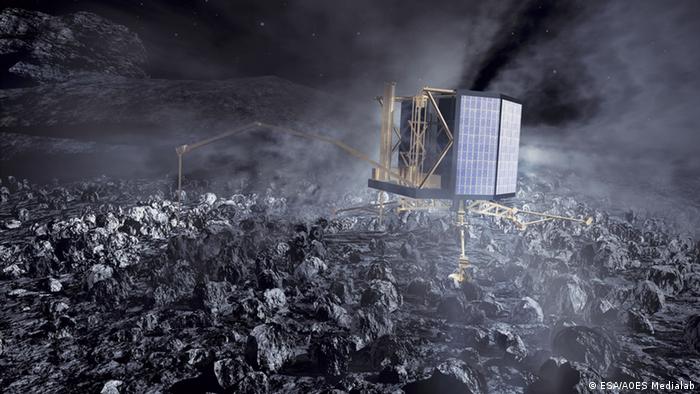 Philae is well suited to work even in stinky environments

The comet, on which Rosetta's lander Philae is supposed to touch down on November 12th, smells like a mix of rotten eggs and a horse stable. Or at least that's the conclusion reached by Kathrin Altweg, who heads the ROSINA project at the Center for Space and Habitability (CSH) at the University of Bern. 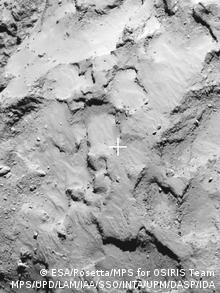 This spot, codenamed 'J,' is where Philae is supposed to touch down

The team of researchers at the ROSINA project are manually controlling a gas detection device on board Rosetta. The spacecraft is orbiting around comet 67P/Churyumov-Gerasimenko - "Chury" for short - and is getting closer day by day. The sensors have just now provided the first results from the gas cloud surrounding Chury.

The rotten egg smell stems from hydrogen sulfide; ammonia, meanwhile, adds the whiff of horse stable. The pungent odors are then braced by the biting stench of formaldehyde, the vinegar-like scent of sulfur dioxide and the sweet smell of carbon disulfide. Add to the cocktail some alcohol (methane), a touch of almond (stemming from hydrogen cyanide), and you have the finished eau de Chury.

Chury is still about 400 million kilometers (about 250 million miles) away from the sun.

"The closer the comet gets to the sun, the more of its ice will evaporate, and the gas emissions will get more intense," project leader Altweg explained.

Space probe Rosetta has reached position near a deep-space comet that scientists hope holds clues about the solar system's origins. The much-anticipated rendezvous comes at the end of a decade-long journey. (06.08.2014)

While the volume of gas emitted by the comet has caught the researchers by surprise, the first results have confirmed expectations that the comet holds the building blocks of life. The search will soon enter into a decisive phase: On November 12, at around 10:00 CET, Rosetta will release its lander, Philae.

Then, at around 17:00 CET, the three control centers in Europe expect to receive the first signal, confirming the successful touchdown. About two hours later, scientists at the European Space Agency ESA and the German national aeronautics and space research center DLR are expecting first pictures from the surface of the comet.

DW will cover the event live on its webpage from the control centers in Darmstadt and Cologne.