Why Oberstaufen, a southern German town, supports Google Street View | News and current affairs from Germany and around the world | DW | 12.10.2010

In a DW interview, Bianca Keybach of Oberstaufen explains why her town welcomes Google, and thinks that many of the fears against the service are irrational. 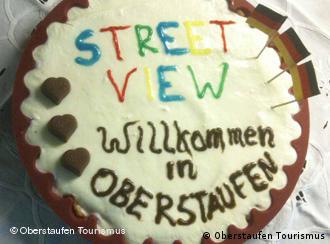 The town of Oberstaufen baked Google a cake

As the deadline for German residents to remove their homes from Google Street View approaches this Friday, October 15, the privacy debate rages on across the country. However, one city in the southern state of Bavaria, Oberstaufen, has publicly supported Google Street View - and may be the only city in the country that has supported the company to such a great degree.

In an interview with Deutsche Welle, Bianca Keybach, the head of Oberstaufen's tourist office, explained why the city even went so far as to bake for Google.

Deutsche Welle: Oberstaufen made a video and even baked a cake for Google. Is that right?

Bianca Keybach: Yes, we made a cake for Google to welcome them and we put it into our Facebook fan page and afterward we sent an invitation to Google to say that we would be glad to welcome them here, and then Google contacted us and we will see what happens.

When Google contacted you, what happened?

They were thankful for being so positive because this was a very big discussion in Germany, [due to privacy] and taking pictures and everybody says we don't want that. We were one of the towns that said we would like [Street View].

Tell me why you want Google taking Street View photographs in your town? What do you hope to accomplish other than to show how great the town is?

I think that it would be an additional service for our guests. When they are choosing a hotel or reading our brochures or they look at our homepage and they can't really say if everything is true, if there is a big street next to the hotel. With Google Street View they can look into the town and discover the street, discover the region and after the holidays they can show their family and friends where they have been and what they can recommend. 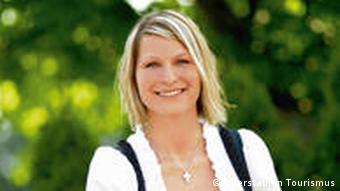 They've been here last year or at the beginning of this year. They were in Oberstaufen. Nobody saw them, though. They took pictures and they have them and we'll all waiting if there's any chance that we can go on Street View as soon as possible.

Some have argued against Street View because they say criminals could use it to plan robberies. Do you think that's a valid argument?

That's a very interesting argument, because it's one of the most important arguments for the critics but I think it's crazy because the pictures were taken five or 10 months ago and they will be online for five or 10 years. But if I want to get into a house and commit a crime, I won't use a picture that is many years old. I could just use a postcard, for example, as a basis for burglary. I think that's not very realistic, but it's very nice for a symbolic discussion.

Are you surprised that there haven't been more cities that have welcomed Google like Oberstaufen has?

I was not surprised because usually in Germany you wait [to not draw attention to yourself]. As long as you're waiting, nobody is criticizing you.

Now you mentioned earlier that you sent Google a cake. What kind of cake was it?

I think it was a chocolate cake that was covered in frosting. We just took a picture of the cake and sent the picture by e-mail, by Twitter and we put it on Facebook and we sent a real invitation that as soon as they come to take the other pictures of Oberstaufen we will welcome them with the original cake.

Google plans launch its Street View project in Germany's 20 biggest cities by the end of the year. But not all Germans are happy that their homes, cars and even themselves could be online for all to see. (12.10.2010)