Why Jews replaced wine with beer in Bavaria

When Bavaria introduced its famous Beer Purity Law 500 years ago, Jews had already developed their own brewing traditions over thousands of years. The Jewish Museum in Munich now celebrates the cultural history of beer. 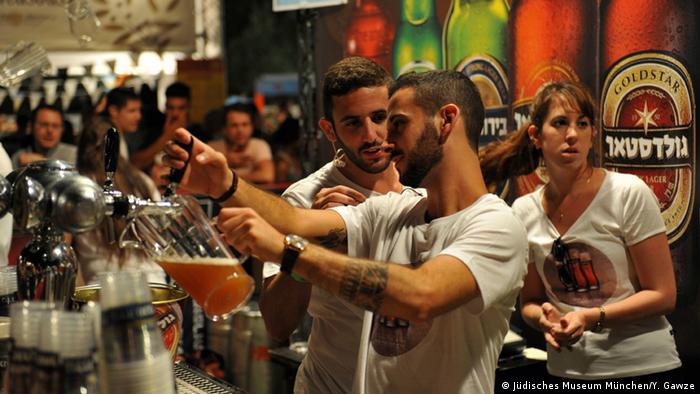 Every year at Hanukkah, the Jewish Festival of Lights, the New York-based Shmaltz Brewing Company brews eight special beers for each of the eight days of the celebration. "On the last evening of the festival, the empty bottles make up a Hanukkah candlestick," says Bernhard Purin, director of the Jewish Museum in Munich Munich.

This craft brewery creatively integrates Jewish culture in its marketing, naming for instance their beer "He'Brew." Creativity and risk-taking have also shaped the history of Jewish brewing - and this is particularly true in Bavaria. 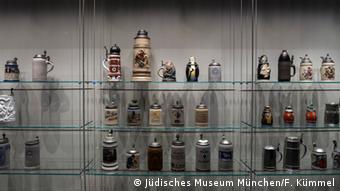 A beer mug for every occasion

When Germany introduced freedom of trade in 1869, young Jews invented a new craft: the refining of beer mugs. In one room, porcelain mugs were painted, in the next room, the caps were cast in tin, and in the third room, the two parts were put together.

One such beer mug, for example, takes the shape of Munich's St. Mary's Church. Another one is reminiscent of a mountain range with cliffs, flowers and meadows. Yet another one is rather simple by comparison, depicting the emblem of Munich, the "Münchner Kindl."

"Companies then went on to produce special beer mugs for particular occasions," explains Purin. For an exhibition on Islamic art held in 1910, they painted a mug on which the Münchner Kindl wasn't wearing the typical hood and a Christian cross, but an Islamic fez and a water pipe instead - along with a typically huge Bavarian mug of beer.

These are just some of the stories told by a current exhibition at the Jewish Museum in Munich, called "Beer is the Wine of this Land: Jewish Brewery Tales." It explores the Jewish cultural history of beer.

"It goes back thousands of years," says Purin, who organized the exhibition. "In Egypt, beer was a popular beverage over 4,000 years ago. The Israelites discovered it while they were slaves there and later brewed their own beer in Israel when they returned." 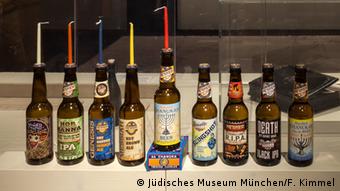 Beer bottles can also serve as candle holders for Hanukkah

Pure and kosher - except shell beer

Bavarians proudly celebrate their beer tradition, as the German Beer Purity Law was developed 500 years ago. At that same period, Jews were debating on whether beer could be used for blessings, instead of wine.

Initially, beer was considered a universal recipe against all kinds of illnesses, such as snake bites, constipation, leprosy and jaundice, reports Rabbi Eli Freedman. It was then determined that, "It is permitted to use beer for the kiddush (blessing), as long as beer is 'the wine of the land'." Such a condition definitely applied better to Bavaria than regions where wine was cultivated, such as around the Moselle River or in Galilea.

Beer is definitely kosher in terms of its ingredients, according to Freedman. "There is a notable exception to this rule: the English Oyster Stout, as oysters, like all shells, are not kosher," explains Purin, the museum director. In its purest form - as prescribed by the German Purity Law - beer may only consist of water, barley or wheat, and hops. 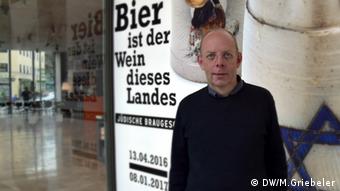 Jewish hops in the Nazi era

Hops actually allowed Jews to get into the beer business: When they were driven out of cities in the late Middle Ages, some of them turned to hop cultivation. In the city of Nuremberg in 1890, for example, roughly 70 percent of all hop farms were owned by Jews.

That did not change much during the Nazi rule. Although German companies, after prior consultation with the Jewish owners, took over their hop businesses, the director of the Jewish Museum describes the process as a relatively "friendly aryanization." "After 1945, the stores were returned to their original owners. This all happened in mutual agreement," he adds. 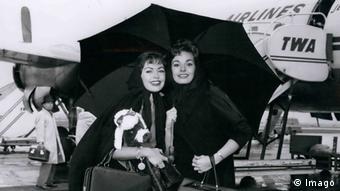 "Miss Rheingold" (right) was highly popular in the US

The renowned Munich-based brewers' family Schülein did not share the same fate. Before the Nazis came to power, their brand, Löwenbräu, was the most famous export brewery, with trains transporting refrigerated beer wagons across Europe all the way to Barcelona as early as 1895.

In 1935, Hermann Schülein was forced to leave Germany because of the Nazis. He went on to build a new huge business in the US, managing the Liebman Brewery on the East Coast. The Rheingold lager became the company's best-selling beer.

"Schülein was a marketing genius," explains Purin. As the first company to do so, the Liebman Brewery resorted to famous stars such as Nat King Cole, John Wayne and Marlene Dietrich for their advertising. There were Rheingold songs, TV series, and, from 1940 to 1965, even a beauty contest called "Miss Rheingold," based on the population's votes. "In the 50s, more people would go out to vote for the Miss Rheingold elections than for the presidential elections," says Purin.

From Carlsberg to craft beer

Although the Liebman Brewery stopped producing beer in 1976, Jewish brewers are still active in the US and elsewhere.

The Shmaltz Brewing Company in New York provides a modern example, but several big names also come to mind, as Purin points out: "The only big brewery still existing in Vienna, the Ottakringer, was founded by the Jewish family Kuffner. And a Mr. Jacobsen, who was Jewish, was the founder of Denmark's biggest brewery: Carlsberg."

The exhibition "Beer is the Wine of this Land: Jewish Brewery Tales" is held at the Jewish Museum in Munich until January 8, 2017.

To beer or not to beer in Berlin

When it comes to fun, people mostly stick to food and drink. Holidays are all about cooking, birthdays are filled with cakes and champagne. And Berlin's fair focusing exclusively on belly filling is paradise on earth. (23.01.2014)

5 places you probably didn't know could get you drunk

You can either drink them or go on vacation to them - or both. Here are five alcoholic beverages that are named after cities. (29.01.2016)