Why is Chinese beer rising in popularity in Pakistan? 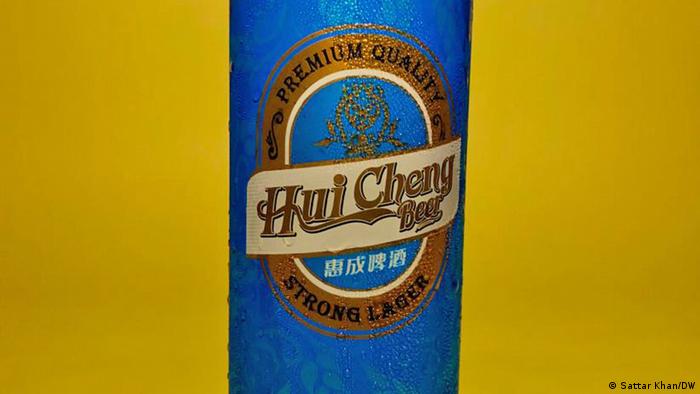 Some consumers are attracted to the beer's colorful label

Chinese beer is taking off in Pakistan after a company set up a beer plant a few years ago in the western province of Balochistan. The plant supplies beer to large parts of the province, along with the southern province of Sindh and the commercial hub of Karachi. Fans say the colorful packaging, availability and high alcohol content is attracting locals to try the beer.

Muhammad Zaman Khan, the director-general of Excise and Taxation South Balochistan, told DW that the Chinese company, Hui Coastal Brewery and Distillery Limited, applied for the plant in 2016 and was granted a license in 2018.

The company has introduced three types of beer, with each can holding 500 milliliters (around a pint), said Asif Hasan, who lives in Hub, the city where the factory is located. The variations include Hungchi Special Brew, Hungchi Amber Lager and Hui Cheng.

Hasan said he has a group of 25 friends and that all of them have tried the beer. "Since the establishment of the plant, I have tasted it more than 100 times," he added.

Maotai: The liquor of China's elite and powerful

Consumers see different reasons behind the popularity of Chinese beer. Saami Ibrahim, a resident of Karachi's Malir area, said the higher alcohol percentage of 5-8% is attracting people. "I had just two cans and I felt as if I was drunk," Ibrahim told DW.

Akhter Baloch, a resident of Hub, Balochistan, agreed. The high percentage is especially attractive for those who try it for the first time and really want to feel drunk, he told DW. Baloch also believes that the bright colors of the can could be attracting people to try the beer. The fact that it is being produced by foreigners could also be influencing people to purchase the beer, he added.

Buying and consuming alcohol is not easy in the Islamic republic, where it is officially banned for Muslims. Most alcohol consumers buy it from Christian, Hindu and other non-Muslim sellers who are allowed to buy and sell alcohol. Because of this, alcohol is sometimes difficult to access, but many residents of Balochistan and Sindh say Chinese beer is more easily available.

Yousuf Faryadi Baloch, a resident of Gwadar, a port city of Balochistan, said the three Chinese brands of beer are readily available across the province.

Liquor production in Pakistan is monopolized by a few companies, but with the arrival of the Chinese, it is expected that competition will increase. Khan revealed that Hui Coastal Brewery only produces beer, but has a license to distill other alcoholic beverages as well depending on market demand.

Zulfikar Ali Bhutto Jr: No place for me in Pakistan's non-serious political landscape 16.08.2022