He sees echoes of Nazi imagery in present-day political campaigns, says curator Alexander von Berswordt-Wallrabe from the "Museum unter Tage" in Bochum. He tells DW why he wants museum visitors to find out for themselves what made Nazi art so deplorable.

The exhibition "Artige Kunst" (Compliant Art) is a play on the word the Nazis used to label degenerate art: "entartet."

DW: Mr von Berswordt, "Artige Kunst" sounds like an antonym to the Nazi terminology of "degenerate art." Since the end of World War II, Nazi artists were rarely featured in German museums, if at all. Why did you come up with this exhibition?

Alexander von Berswordt: That's exactly why - the fact that these artists haven't been seen. For 50 years now, we've only ever seen these works as illustrations or as individual pieces. But we've learned that there are a lot of these works in storage. So we thought, why don't people talk about this?

It's completely out of question that these things could be in any way acceptable. But I believe that the public has to notice that for themselves. We shouldn't turn artworks into martyrs by hiding them. About 9,000 such works of art were taken to the US by Americans, and when many of them managed to make their way back to Germany in the 1980s, several such pieces also ended up at the Historical Museum in Berlin.

We decided to make our own impressions, and we nearly got sick doing so. But we thought that this art has to be exposed to the public so that everyone can make up their own mind.

What exactly is it that is depicted on these "compliant" works? Is it all propaganda?

Yes and no. We initially believed that all these works of art had been created for propaganda purposes. However, portraits of Hitler, of war and of other Nazi party values only make up about 10 percent of all the works. Americans kept large parts of the propaganda items for themselves. But 90 percent and even more of what you get to see in this exhibition looks like harmless pictures at first sight.

In truth, they also fuel propaganda, but for a kind of reality that didn't exist at that period of time. You will see healthy families with blond children, idealized depictions of industrial landscapes, mythological images, and harmless portraits. But the problem is that they were created at a time, between 1939 and 1945, when everything around them was being bombed to smithereens. People were actually dying and six million were killed in the Holocaust. This is something that, as we now know today, was widely known at the time as well.

So these artists, who painted such harmless pictures on the request of the regime, appear so unreal that we can't even refer to their works as art.

You represent works by artists who were promoted by the Nazis, and you juxtapose these with artists who were persecuted by them. What do you do in order to prevent that Nazi art is suddenly regarded as rehabilitated for being part of this exhibition?

The question is completely legitimate because that was also our concern. We let the pictures speak to each other. There are also the works from that time that were deemed "degenerate" by the Nazis. We are calling the Nazi art "artig" (compliant) because that is the opposite of "entartet" (degenerate), which is what the Nazis called art they didn't agree with. When you think of the great names that were dubbed "degenerate" - Hans Albers, Kurt Schwitters, Paul Cézanne, Pablo Picasso, Paul Klee, Vincent van Gogh, Piet Mondrian - then it's very agitating for visitors to see their works juxtaposed with Nazi works.

We have positioned the works in a kind of thematic dialogue. For example, the "artig" Madonna by Ivo Saliger is hung across from a dramatic crucifixion scene by George Grosz. 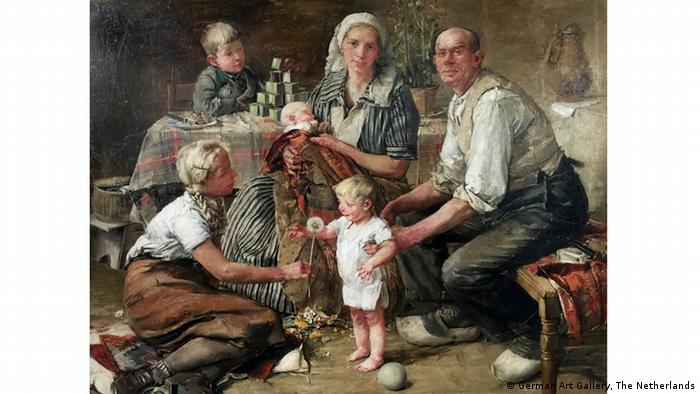 A portrait of the "perfect" family by Hans Schmidt-Wiedenbrück

We also bring in documentary photos from the situation after the Bergen-Belsen concentration camp was liberated. A young boy can be seen walking by a pile of corpses. Hanging next to the image are family pictures or Nazi advertisements depicting robust parents and healthy children. The boy and the children in the ad seem to be looking right at each other.

We also show a text on the wall in the foyer which explains the exhibition before visitors enter. We are exhibiting photographs of destroyed cities, including Mainz, so that people can't overlook the reality of everyday life.

Everyone notices that the works sponsored by the Nazis are not artistic. The art historian Max Imdahl explained it in a text he called "Unkunst" (Unart). That seems to be to be the proper term. It's not about good and bad art, but about art and "unart."

The patron Peter Ludwig from Aachen commissioned a self-portrait together with his wife from Arno Breker in the 1980s. At the time, artist Klaus Staeck protested by basically saying, "No Nazi art in museums."

Klaus Staeck objected to such art in museums. He protested because, for him, Arno Breker was a central Nazi artist - Hitler's minion. I supported and disseminated his appeal at the time. I had been active for many years as a gallery owner and had a large network. Klaus Staeck asked me to convince Max Imdahl to join our protest against Peter Ludwig, but that didn't correspond with Imdahl's understanding of art, so he refused his signature.

Instead, since he still wasn't in agreement with Peter Ludwig's actions, he wrote his own text about the state of art in the Third Reich. It was a fabulous text in which he examined a sculpture by Breker and juxtaposed it with one by Michelangelo. Breker was a technically skilled sculptor, but no match for Michelangelo. The figures he created are dead and lifeless. They are ideal figures - but if you take a closer look, you see they don't contain anything human. They are just what the Nazis wanted - healthy guys who could fight, didn't talk back, and let themselves be collectivized.

How does this imagery of a perfect world come across today? Can it still be instrumentalized today by the wrong people?

You can't do that with artworks dating from 1933, 1937 or 1941 because they can immediately be associated with the time. But if the images were further developed for our time, they could well be instrumentalized. I took a look at the last communal elections in Berlin. There were many right-leaning parties whose imagery was very close to Nazi art. And the slogans were similar to the messages of the Nazis. That worries me.

The "Artige Kunst" exhibition was planned as a collaboration with a Polish museum. Why did that not work out?

As a second location, we planned a collaboration with a museum for contemporary art in Wroclaw, Poland. The city is a European Capital of Culture in 2016. The director of the museum, Dorota Monkiewicz, was committed to showing the exhibition in her museum. However, the ruling PiS government fired her. Her contract was not extended. All agreed projects were canceled.

When we asked how we could help, she said, "I was kicked out because I'm a left-leaning liberal." When I asked her whether it had anything to do with the exhibition, she said it wasn't a problem to show original works by Nazi artists, but that the works were being shown in a critical light. It's deeply concerning that something like this should happen in 2016 in Poland - a country that was invaded by the Nazis in 1939.

So you had to resort to other partner museums…

Rostock in Germany is an important location because there are right-wing developments there. The museum director is very committed. Then we also found Regensburg. But we weren't able to win over major German museums.

New York's Metropolitan Museum of Art has been sued by relatives of a German Jewish industrialist who once owned Picasso's "The Actor." It was allegedly sold "under duress" in 1938. (01.10.2016)