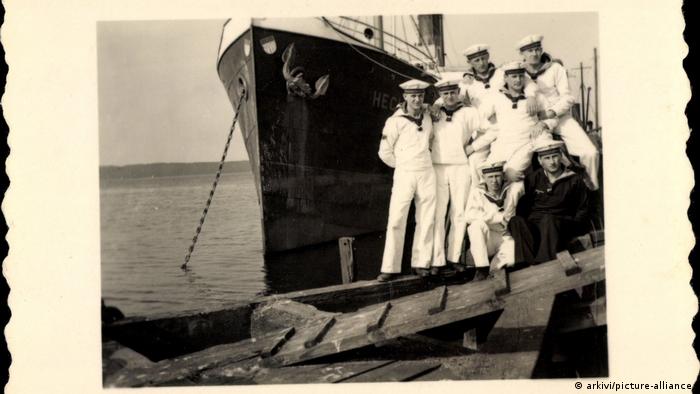 It's a 200-year-old song about sailors waiting for supplies on their whaling boats, but it has become a pop culture phenomenon that uniquely encapsulates the state of the world in 2021.

The trend started out with a post by Scottish TikToker Nathan Evans at the end of December, showing him singing "Wellerman," a sea shanty from New Zealand dating back to the 19th century. The 26-year-old had been covering various sea shanties on his account, but the whole thing went viral with this particularly rousing interpretation, which has already obtained over 157 million likes on TikTok, and many more views across various social media platforms:

Evans uploaded "Wellerman" to have a good time with his followers, to sing along and then move on to the next song. "Never in a million years did I expect that it will.... become a song that will climb the charts all over the world. It's incredible," Evans told DW.

Sea shanties were typically sung by sailors at work. Among them, "Drunken Sailor" is probably the best-known shanty in the historical repertoire. They were particularly popular in the 19th century, before steam-powered ships replaced sailing vessels.

The call-and-response songs were led by one of the sailors, known as the shantyman, and the rest of the crew would join him in the chorus, in the style of these TikTok contributors who lovingly added their voices to Evans' initial cover:

Evans says he was speechless when he found out that Brian May joined in, as did Andrew Lloyd Webber, Ronan Keating and Gary Barlow. "Seeing all these people do sea shanties and joining in, it is just incredible. I would never imagine that this was going to happen."

The "Wellerman" in the song refers to an Australian shore-whaling company called The Weller Bros, which mainly ran its operations along the coast of New Zealand from 1830 to 1840. In the song, the Wellerman is the supply ship that is expected to be sent by the company.

As the chorus goes: "Soon may the Wellerman come / To bring us sugar and tea and rum. / One day, when the tonguin' is done / We'll take our leave and go."

Tonguing was the name given to the work of the tonguers, who were in charge of butchering the whale after it had been caught.

But knowing the meaning of the term was not essential to turn the song into a viral hit. In a way, it reflects our collective hope to soon be freed from captivity in a locked-down world, whenever the tonguin' — or rather the pandemic — is over.

With this song, TikTok's video format, which allows users to keep a visual reference to the initial clip, also reproduces the appearance of many of our social interactions over the past year — those countless video conferences and calls with colleagues and relatives.

Variations on a theme

Different compilations of the various additions to this "massive earworm" have been created, such as this one by Twitter user Echo Alfa Bravo:

Even Kermit the frog has joined in on the trend:

And it has since been remixed with various beats:

Even those who were initially skeptical about "Wellerman" have decided that the singer was "kinda lit":

Science journalist Leigh Cowart offered her interpretation as to why sea shanties are popular right now: "behavioral synchrony feels really, really good to humans and many of us have been social distancing for months and deprived of this," she tweeted.

Beyond the social isolation caused by the pandemic, the 200-year-old song also feels particularly soothing amid the US Capitol rampage and Donald Trump's second impeachment, a feeling expressed by the famous "This is fine" meme:

TikTok and museums: Can they really jibe?

Despite US President Donald Trump's threat to ban the platform, TikTok is growing in popularity worldwide. Famous museums are starting their own channels.

Video creators are pretending to be holocaust victims on TikTok, using make-up to create bruises and simulate starvation. The Auschwitz memorial spoke out against the controversial content.